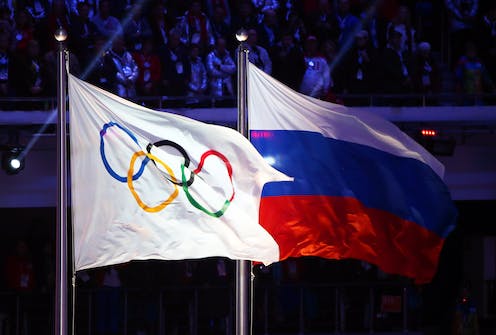 As the result of a state-sponsored doping regime in the lead-up to and during the 2014 Sochi Winter Olympics, the International Olympic Committee (IOC) has banned Russia from participating at next year’s games.

Bans from the Olympics are not unprecedented. In the aftermath of the two world wars, certain countries – like Germany and Japan – were not permitted to compete.

Also, the IOC banned South Africa for three decades from the 1960s because of its apartheid regime. Afghanistan was suspended from the Olympics in 1999, partly because of the Taliban’s ban on the participation of women athletes. It did not send athletes to the 2000 Olympics.

The ban on Russia from competing at next year’s Winter Olympics in South Korea is, however, unique: it is directly linked to the country’s lack of sporting integrity.

The ban is a humiliating blow to Russian sport generally but also to the country’s president, Vladimir Putin. His interest in winter sports was evidenced by Russia spending a record US$51 billion on hosting the Olympics in 2014, which surpassed the previous record Beijing set in 2008.

But just one Olympic cycle later, the integrity of that event – at which Russia topped the medal table – has been undermined, and the Russian flag will not fly at the 2018 Games. Russian state TV has already said it will not broadcast from South Korea, where the country’s athletes were expected to be medal contenders in one-third of its 102 events.

Aside from Putin’s reaction, there are several further points of interest arising from the ban.

First, it is likely that Russia will appeal to the Court of Arbitration for Sport (CAS).

Russia appealed its ban from the 2016 Rio Paralympics – it remains banned from the Winter Paralympics – to CAS. This time, expect the appeal to be founded on the due process argument that the reports upon which the IOC’s decision is based – the McLaren reports of 2016 and the IOC’s Schmid Commission – were investigatory only. While the evidence, at first instance, appears compelling, Russia has yet to test or answer it in an adversarial setting.

Similar to what occurred in the lead-up to the Rio Olympics in 2016 – where a ban on Russia competing was contemplated – the IOC has laid down strict testing criteria which such neutral athletes must satisfy before being declared eligible. Expect multiple CAS appeals to emanate from the IOC’s interpretation of criteria.

Echoes and lessons of history

CAS appeals may be rendered moot if Russia, as has been hinted, decides that such is the disproportionate, biased nature of the IOC’s actions that it will fully boycott the event and prohibit its athletes from competing even as “Olympic Athletes from Russia”.

Boycotts have historical connotations. The last time Russia hosted an Olympics (in Moscow in 1980) it boycotted the subsequent (1984) Games for political reasons relating to the Cold War.

One of the consequences for sport in the Cold War era was the use of sporting success as a propaganda tool. The Soviets and many of its satellite states – notably East Germany – used sophisticated state-sponsored doping regimes to fuel this success.

Echoes of that regime, particularly the East German system, resonate today. Its system was not so much state-sponsored but state-mandated.

Evidence from the surviving athletes themselves and from the Stasi files of the era reveal that young East German athletes rarely had a choice when it came to ingesting almost industrial levels of steroids, which had a devastating impact on their long-term health.

The issue of informed, collective consent and fault in sports doping has been discussed at CAS – notably in the Essendon drugs case in Australian rules football. And the nature of doping infractions in a team setting is often much more nuanced than might first appear.

Athletes generally have a real-time appreciation of their bodies: their focus is on the next game or event; they often, rightly or wrongly, assign their long-term health to others in their entourage or support staff.

While doping ultimately reveals itself in the testing of athletes’ samples, as a matter of causation or responsibility, fault may lie elsewhere.

In Russia’s case, it is of note that the IOC has also banned its current deputy prime minister and former sports minister, Vitaly Mutko, from all future Olympic Games. But while Mutko will not be able to attend the 2018 Winter Olympics, he will continue to be the chief organiser for the 2018 football World Cup, which Russia will host.

FIFA, world football’s governing body, does not believe this is an impediment to Russia hosting the World Cup. But expect its attitude to come under intense scrutiny in coming months, as well as the wider issue of the prevalence of doping in football.

Finally, banning Russia from the 2018 Winter Olympics was a straightforward decision for the IOC. The trickier issue will come with regard to the 2020 Summer Olympics. Will Russia have reformed its anti-doping policy and procedure to the standards expected by entities such as the World Anti-Doping Agency (WADA)?

The criteria used by WADA and others to judge Russia will be highly technical in nature. Perhaps the most important way to gauge Russia’s good faith on this matter would be to see how it treated three key whistleblowers who have been central to this whole affair: Vitaly Stepanov and his wife Yuliya, and Grigory Rodchenkov.

Thus far, Russia has traduced them. They no longer live in Russia, but in fear. If Russia continues to discredit them, it should remain discredited in the eyes of the sporting world.