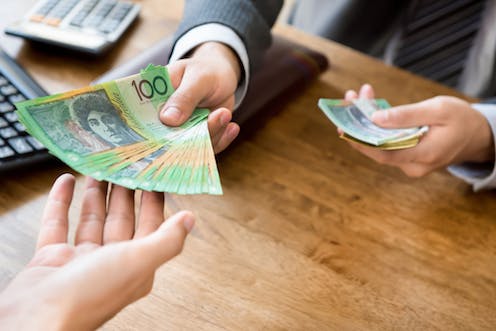 The Australian public should be dismayed and disgusted that the major banks are still attempting to cover up the extent of their complicity in manipulating the Bank Bill Swap Rate (BBSW), a key interest rate benchmark.

For years, the banks covered up the involvement of their traders in manipulating not only interest rate but also foreign exchange benchmarks, by attempting to outspend the corporate regulator, ASIC, in the courts, using shareholders’ money.

Faced with publication of the evidence they caved in at the very last minute to settle with ASIC, paying even more shareholders’ funds, for fines and legal costs.

Has any director or senior manager taken personal responsibility, or even apologised, for either the rampant misconduct or the failure to monitor it – No!

In a short media release, ANZ acknowledged, with little contrition, that

in the course of trading on the BBSW market, a small number of traders attempted to engage in unconscionable conduct on ten dates between September 2010 and February 2012. ANZ also did not have in place adequate policies and systems to monitor trading and communications of its BBSW traders.

But we should not be fooled by the references to the “small number of traders”, or “ten dates”.

Last year, CBA and NAB agreed to enforceable undertakings with ASIC in relation to manipulating the foreign exchange benchmark, which was arguably much more egregious than the BBSW manipulation, as it involved sharing of information with other market participants, in particular sensitive information about clients’ trades.

Not one of the directors or senior managers of these banks took personal responsibility for the actions of their staff or their collective failure to monitor such obvious misconduct.

The agreement between ASIC, NAB and ANZ stipulates that

Trading on nonpublic confidential information, which is what “manipulating the bank bill swap rate to their advantage and the disadvantage of others” was, is often punished by custodial sentences not some short court-ordered training course. This would just reiterate the rules that the traders should have been following anyway and which diligent management should have been enforcing.

The failure to monitor staff seems not to have slowed the progress of some senior managers. For example, ANZ CEO Shayne Elliot, was head of ANZ’s Institutional Bank (i.e. trading operations) during most of the period in which the unconscionable conduct took place.

Why did they pursue the court cases?

So what were the boards of directors of some of Australia’s largest companies doing while this failure to monitor unconscionable conduct was going on?

While neither superstar chairmen Ken Henry (NAB) nor David Gonski (ANZ) were in place during the original misconduct, they have been in place since 2014 and have had ample opportunity to inquire into the details of the scandal.

Having read the same evidence as Justice Jagot, directors chose to proceed with the case before caving in on the day it was due to be heard in court. Investors should be tearing their hair out at such colossal waste of money on high-priced (and in the end useless) lawyers.

Did they really believe this time was different, given that other banks had already pleaded guilty to manipulating BBSW? Even if they were not in place at the time, the non-executive directors of both banks are certainly responsible for continuing this expensive charade.

Such lack of oversight should surely trigger the first investigation when the new Banking Executive Accountability Regime (BEAR) legislation comes into force, as it covers directors and senior managers.

Federal Court Justice Jayne Jagot certainly pulled no punches in her statutory approval of the settlement between ASIC and the ANZ and NAB banks, saying that the Australian public should be “shocked, dismayed and disgusted” by the behaviour of the two banks.

The Australian public is right to be perplexed as to why no one considers themselves personally accountable for such a fiasco. And investors must be afraid that in pursuing the failed litigation so far, without apologising, that further harm is not done by possible class action litigation in the United States.

The Australian taxpayer would be justifiably annoyed to learn that the offences admitted by the banks took place between 2010 and 2012, when the very same banks were given the free handout of a government guarantee following the global financial crisis (GFC) - that really is biting the hand that feeds you.

So, should Australian investors, taxpayers and the public be “shocked, dismayed and disgusted” as the judge suggested? Yes.

But recent history suggests that the largest banks will just try to tough it out before returning to their previous modus operandi. Only a royal commission into banking regulation will break this vicious circle.