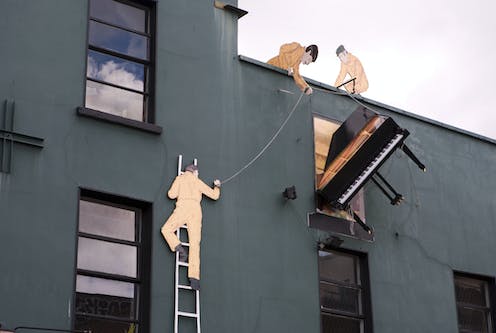 Where Robert Frost might write a few lines soundly cut from the solid old tree of language and delivered in his mellifluous White Mountain voice,

The way a crowShook down on meThe dust of snowFrom a hemlock treeHas given my heartA change of moodAnd saved some partOf a day I had rued.

Or where John Ashbery might offer us a backward glance as he dances formally away from every assumption we might have brought to poetry, and writes, possibly talking to himself anyway:

This poem is concerned with language on a very plain level.Look at it talking to you. You look out a windowOr pretend to fidget. You have it but you don’t have it.You miss it, it misses you. You miss each other.This poem is sad because it wants to be yours, and cannot be.

(from Paradoxes and Oxymorons)

Charles Simic (b. 1938) gives us in his sinner’s/saint’s drawl after a night of either drinking or praying (who knows) in the voice of a night clerk in a roach hotel:

I’m the furtive inspector of dimly lit corridors,Dead lightbulbs and red exit signs,Doors that show tracesOf numerous attempts at violent entry,Is that the sound of a maid making a bed at midnight?The rustle of counterfeit billsBeing counted in the wedding suite?A fine-tooth comb passing through a head of gray hair?Eternity is a mirror and a spider web,Someone wrote with lipstick in the elevator.I better get the passkey and see for myself.I better bring along a book of matches too.

(from Night Clerk in a Roach Hotel)

In comparison to Frost or Ashbery, Simic’s poetry is unformed and informal, almost not poetry but more like the bizarre jottings of a mind and a character who can’t stop putting down whatever occurs to him. In a lesser writer this would be the private, self-indulgent notes to himself he should never show to others because they’re not meant for others and wouldn’t interest others.

The world is old, it was always old,There’s nothing new in it this afternoon.The garden could’ve been a padlocked windowOf a pawnshop I was studyingWith every item in it dust-covered.Each one of my thoughts was being ghostwrittenBy anonymous authors. Each time they hitA cobwebbed typewriter key, I shudder.

Simic’s poetry isn’t hung upon a metrical count or drawn down along patterns of rhyme, or jumping through linguistic and logico-moral puzzles into enigmatic existence, but rather it’s there in a delicate hold on darkness and violence along with a laconic, almost exhausted humour. The jokes don’t have punch lines, they have points. The images don’t teach us lessons but give us the world. At least that is their gesture.

Here is part of Simic’s address To Fate

You were always more real to me than God.Setting up the props for a tragedy,Hammering the nails inWith only a few close friends invited to watch.Just to be neighborly, you made a pretty girl lame,Ran over a child with a motorcycle.I can think of many other examples.Ditto: How the two of us keep meeting….I can feel you snuggle close to me at night,With your hot breath, your cold hands—And me already like an old pianoDangling out of a window at the end of a rope.

To compare himself to a dangling old piano at the mercy of crude removalists is funny enough, but that sinister rope at the end of the trope reveals his dark sensibility, while the simple vision of the crucifixion as a home-made theatre production expresses his determination to reduce the iconic moments of western Judaeo-Christian culture back to some minor gesture a man in a bar might make while talking to you.

The informal always wins over any pull towards gravitas. And the trick is to do it in a way that matters to the reader. This is poetry that does not appear to be obscure, overly intellectual or self-consciously tricky, but once the first reading is past and the reader’s questions are raised, it’s not possible really to paraphrase the poetry or say in-other-words what the message was. All you can do is go back to the poem and re-live it. Robert Archambeau in Hudson Review has called Simic’s poetry “rich with image and stingy with discursive explanation”. This reluctance to explain himself is one aspect of a lasting commitment to the surreal.

At nearly 80 years of age, Charles Simic is at the far end of his career as a poet, and perhaps by now is more or less looking back on it, the shattered piano reverberating strangely back along the years.

Nearly 30 years his junior, Michael Farrell (b. 1965) is more or less a beginner at this game in comparison to Simic — the piano not even yet an old one, let alone fated for undignified removal. His latest book, I Love Poetry (Giramondo) continues the now long modern tradition of the casual tone in poetry. As with Simic, the surreal has been incorporated into its world as something that goes-without-saying, ironic jokiness pervades imagery and arrangement of phrases and lines (poets have learned a lot from comedians), both are committed to the possibly now common idea that the truth is unsettled and unsettling, and must be discovered anew with every new poem. On Pope Pinocchio’s Angels, Farrell has this to say:

They are good at small business, editing and Sunday Childcare

It is notAdvisable to stand under anAngel in the rain. IfYou have the makings ofAn angel inA country shed they mayBe quite valuable. WhenI fly with angels IAlways book two extra seats

They are often still. SexWith an angel’s worth trying once

Where Simic’s poetry has been touched by his experience of being a child in Yugoslavia during World War II (“the vileness and stupidity I witnessed”), then being one of millions of displaced people, and as an adult a conscript into the US army in the 1960s, Farrell has been a New South Wales country town boy, born in Bombala, and an academic and researcher for the past decade. His poems are never far from high critical theory, the chronic and anarchic disillusionment of post-modernity and post-structuralism, and the linguistic turn that criticism and poetry have taken.

Farrell wrote the above lines while Australian poet-in-residence in Rome at the Australia Council BR Whiting Library, one of the more surreal awards Australian poets vie for these days. Farrell’s responses to Rome in this book pay homage to this odd fit (e.g. the hilarious The Boxer). Like Simic, Farrell is a superb miniaturist, and like him the particulars he works with are the kitsch, the barren items of popular and common culture, ordinary and lost objects pressed into a kaleidoscope of imagination, suggestion and allusion:

These are the uses of Poetry. It makes You warm, it replaces Cinema, it helps You put Words between Self and Heart. there’s no original poem, it’s all Sequel as far back as We can remember. We embrace this, for the Loneliness is hard enough. The Souls of our Cats power the Gloveboxes the Souls of our Dogs the Guidebooks. Our Vehicles and Minds are Parallel Worlds where the Dead live

You’re bent over at the Creek, pretending to pick Blackberries but crying. the Radio is pumping ‘Gold’

I can’t help thinking of Morning tea and the Rations and putting my Frypan in the Flight path of a Mynah but instead retrieve the Tofu from the Boot.

The repeated break-out into prose among Farrell’s poems is the logical extension of that casual, colloquial address these poets are committed to. And what is it but an expression of modesty, of poetry’s place in the dust at the back of the theatre these days, of poetry being as democratic as anything (at least in tone), where anyone’s welcome to take up the microphone. It’s no longer the law that poets lay down, no longer do poets speak as the most sensitive souls among us, or even the most literate. Poets like musicians are workers who work (sometimes hard) to reflect us back to ourselves, to bring us out of ourselves, and to shape, memorably, the world out of air.

Simic asks himself, “Who gave you the permission / To look at the beer can in a ditch?” (from Carrying on Like a Crow), while Farrell overhears the questions of children in a boat travelling from Corsica to Delphi: “Where is the bluest sea, we need to know, where are / The best fish?” (from The Distances).