Before 1914, flowers in everyday life spelt beauty, femininity and innocence; they were seen as part of women’s culture. But during the first world war, that changed. Men gathered posies of flowers on battlefields and dried them in honour of the dead, they turned to wild flowers as motifs for paintings and photographs, and they recognised in blue cornflowers and red poppies the fragility of life.

Historian Paul Fussell referred to the red poppy, Papaver rhoeas, as “an indispensable part of the symbolism” of WWI. When, on November 11, those who fought and died in WWI are commemorated, the sanguine colour of the red poppy, a flower that grew in profusion on Flanders Fields, is a vivid reminder to the living of the cost of sacrifice in war.

At the end of the conflict, artificial replicas of the Flanders poppy were sold in Allied countries to be worn in honour of the dead. Their resistance to decay became an embodiment of everlasting memory. 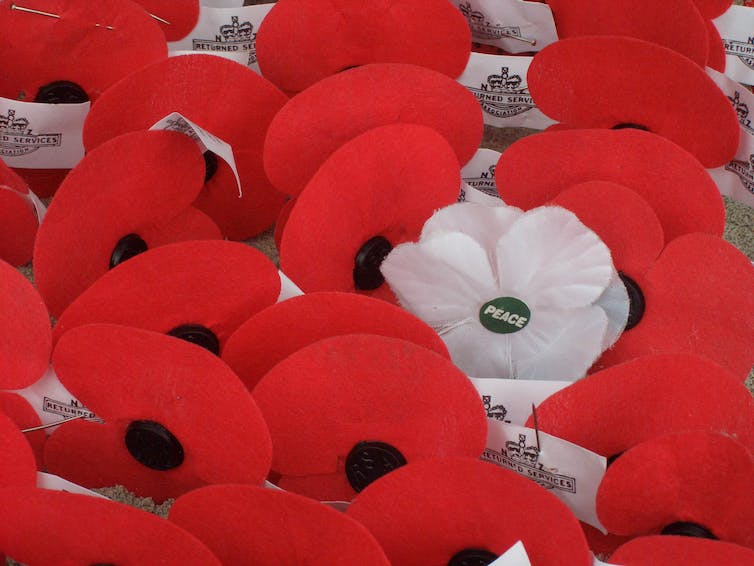 Artificial poppies left at the Waitati cenotaph in New Zealand (2009). The white poppy is used as a symbol of peace. Nankai/Wikimedia Commons, CC BY-SA

However, the red poppy was not always adopted without criticism. After 1933, in opposition to the symbolism of it, peace ceremonies appropriated the white poppy. Each flower expresses a different view on war: red embodies commemoration of sacrifice; white opposes political violence and remembers all war victims.

As living forms, as art, and as symbols, the wildflowers that soldiers encountered in WWI Europe help us negotiate the unimaginable enormity of war and deepen the solemnity of remembrance.

‘We are the dead’

Among the most affecting, but least talked about, Australian war paintings that officially commemorate and remember the fallen soldiers of the First World War, is George Lambert’s Gallipoli Wild Flowers (1919). Painted while Lambert served as Official War Artist, the work is unusual for the absence of soldiers’ bodies shown in action or in death. Yet it alludes to both by the inclusion of an empty slouch hat and a cluster of battlefield wildflowers. At the centre of the array of blossoms is the Flanders poppy. 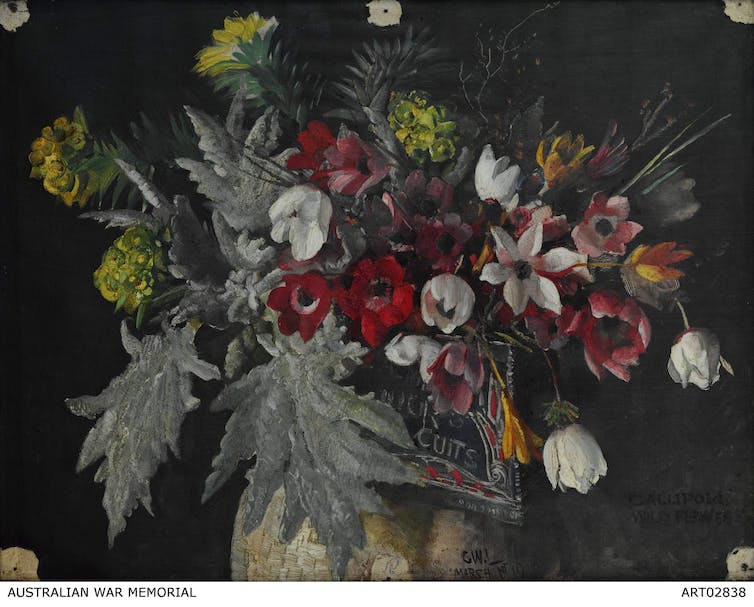 The painting is a floral still-life. It exudes the melancholy of life stilled, and challenges popular conceptions that flowers are feminine, passive and beautiful. If the flowers in Lambert’s painting are beautiful, it is beauty tempered by the knowledge of human suffering. And they break with convention by relating to men, not women.

The dark centres of the poppies stare at us like the eyes of men who fought at Gallipoli. The message they communicate is the same one relayed by poppies in the lines of John McCrae’s mournful poem In Flanders Fields (1915): “we are the dead”.

Other Australian artists deployed by the Australian War Memorial tried to render the same power, and the same symbolisms, as George Lambert’s wildflower still-life, although with less intensity. Will Longstaff, for example, painted Menin Gate at midnight (1927), a monumental commemoration to men who were buried in unmarked graves on the Western Front in which the ghosts of the dead rise up among blood red poppies that grow in the same soil where their bodies decayed. 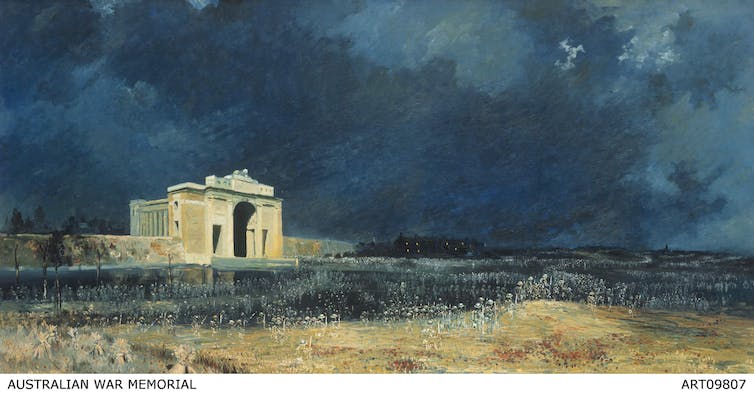 Will Longstaff, ‘Menin Gate at midnight’, oil on canvas (1927). ART09807/Courtesy of the Australian War Memorial

Flowers and the battlefield

On churned up war landscapes, masses of wildflowers covered derelict tanks and blanketed the ground where the dead lay, juxtaposing cold metal and the destructive power of men with the organic growth and regenerative power of nature.

Such contrasts presented Frank Hurley, Australia’s Official War Photographer working in Flanders and Palestine from August to November 1917, with many of the war’s most powerful images. Hurley could not ignore the cruel irony of all that fragile beauty growing free in the midst of industrialised warfare, mass killing, and the corpses of the dead.

Hurley’s Lighthorseman gathering poppies, Palestine (1918) is a rare colour photograph from the period. Hurley well understood the power of the poppy. He knew that for the image to become a national icon of comradeship, the flowers had to be coloured red because it is the poppy’s redness that made it the official symbol of sacrifice. Yet Hurley’s photo is pastoral, and in its vision of ideal life suggests the antithesis of war. 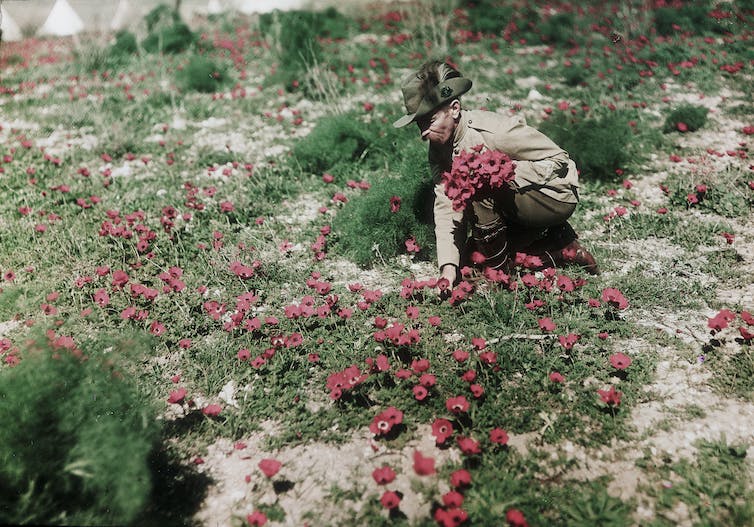 It may also be that flowers have a particular power over our perception. Elaine Scarry argues that the high colouration of a flower’s face is more perfect for imagining and storing images to memory than the faces of people. Official and unofficial WWI records lend support to Scarry’s theory.

When Cecil Malthus, a New Zealand soldier at Gallipoli in 1915, found himself under attack, it was not the faces of the soldiers around him that he remembered, but the faces of self-sown poppies and daisies on the ground.