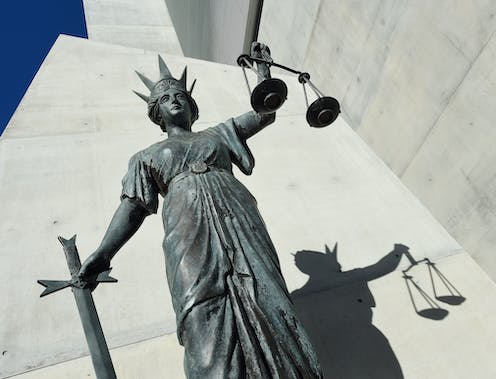 The redress scheme cannot be a truly 'just response' if it says some kinds of victims simply don’t count.AAP/Dave Hunt

The federal government last week announced details for its long-awaited redress scheme for victims of institutional child sex abuse. The proposed scheme is a response to recommendations from the ongoing Royal Commission into...

The federal government last week announced details for its long-awaited redress scheme for victims of institutional child sex abuse. The proposed scheme is a response to recommendations from the ongoing Royal Commission into Institutional Responses to Child Sexual Abuse.

Controversially, the government proposes to exclude from redress anyone convicted of sex offences, and those sentenced to prison terms of five years or more for crimes such as serious drug, homicide or fraud offences.

This proposal is profoundly flawed and a step backward. It is made at a time when institutions should be atoning for past wrongs without arbitrary exceptions.

All Australian states and territories have victims of crime compensation schemes. They provide victims of certain crimes with modest compensation to cover their expenses, or payments to recognise wrongs perpetrated against them.

Although state and territory schemes are typically funded by the state, the Commonwealth scheme anticipates that “responsible entities” – such as churches – will pay.

All schemes include criteria detailing who is eligible for support and who is not. People who “collude” with the perpetrator to rort the scheme are excluded. Victoria’s scheme contains an additional, broad provision requiring its tribunal to consider whether victims’ “character, behaviour or attitude”, past or present, should exclude them. The idea of excluding certain kinds of victims from support is is thus not unique.

However, all exclusion criteria warrant scrutiny, as they raise questions about victimhood, the selective recognition of harm, and social and community responsibility.

The Commonwealth proposal is especially in need of scrutiny, because of its historic significance and symbolic role, and also because it involves more specific criteria for excluding victims than other schemes.

The problem with saying only some victims are worthy of sympathy

We have studied how the Victorian law is interpreted and applied. The Victorian provision differs from the proposed Commonwealth one, but what we found offers clues about the significance of the Commonwealth exclusions.

Victoria’s “character” test allows highly partial moral and political judgements about who may be deemed “worthy” of public sympathy and support. For example, people with a history of illicit drug use or addiction can be excluded on the basis that they have a criminal history.

On occasion, victims with a drug-using history do receive compensation, but this can depend on whether tribunal members interpret the crime they have experienced as an explanation or “excuse” for their drug use or addiction. Here, being a victim of child sexual abuse or family violence is considered relevant.

While an experience of crime might lead to drug use for some, this is not the case for others. The nature of addiction is heavily contested, as is the relationship between drug use and past suffering or trauma.

So, there are practical and ethical problems associated with making decisions in legal contexts about why someone might have begun consuming illicit drugs or developed drug problems, and whether that should exclude them from compensation.

Notably, these evaluations can disproportionately affect women, since women are more often victims of family violence, sexual assault and sexual abuse. Such scrutiny may also retraumatise victims and compound, rather than alleviate, their suffering.

As it happens, the Victorian Law Reform Commission is currently undertaking a review of the Victorian Victims of Crime Assistance Act. We recently told the commission that the existing approach is flawed.

Although it might be politically popular – and less expensive – to separate applicants into the categories of “deserving” and “undeserving” victims, it is morally wrong to do so.

We acknowledge that some taxpayers may not tolerate money being given to people with criminal records. Why, they might ask, compensate criminals for wrongs done to them, when they themselves don’t respect the law?

At least part of the answer is that as a society we must acknowledge the seriousness of the impact on individuals of the kinds of crimes sometimes before the Victorian tribunal. The same holds for the royal commission.

In introducing the bill to parliament, Social Services Minister Christian Porter described it as a “just response”:

Children placed in the trust of our society’s institutions were some of the most vulnerable members in our community and the fact that must be confronted is that many children were sexually abused by the very people charged with their care and protection. No child should ever experience what we now know occurred. That is why it is time for all institutions and all governments to take responsibility for what has happened.

This statement acknowledges that children experienced serious harms in contexts facilitated and overseen by the nation. It insists that the community must accept and respond constructively to this knowledge. Taking a careful and informed approach to the meaning of criminal acts such as illicit drug consumption is part of this obligation.

Importantly, those excluded by the Commonwealth scheme will have been convicted and punished in the past. Should someone who suffered harms as a child forfeit the right to have those wrongs acknowledged? Would this amount to punishing them again?

Justice should apply to everyone

We would argue that a person’s right to justice, to the extent that this might be available through compensatory schemes, should not be tied to past activities.

As justice theorist Sara Ahmed argues we must:

… challenge the view that justice is about […] being the right kind of subject. Justice is not about ‘good character’. Not only does this model work to conceal the power relations at stake in defining what is good-in-itself, but it also works to individuate, personalise and privatise the social relation of (in)justice.

As the royal commission has exposed beyond question, institutional responses to child sexual abuse have often been profoundly irresponsible, and potentially criminal in themselves.

The redress scheme must send the strongest possible message to those responsible. It cannot be a truly “just response” if it says some kinds of victims simply don’t count.