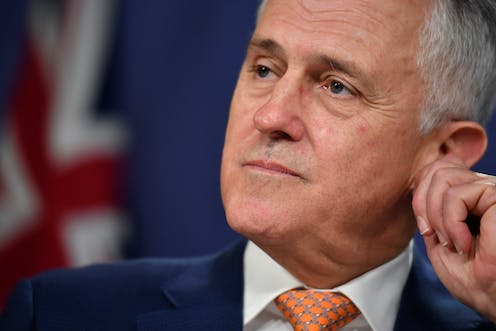 People distinguish between levels of government when casting their votes. Nevertheless, a state result can reverberate federally, whether it is sending a protest or for other reasons.

We only have to remember 2015 to understand that the outcome of the November 25 Queensland poll carries implications for the Turnbull government.

Queensland is notable for big swings. In 2015 the shock defeat of Campbell Newman, who had won in a landslide against Labor, delivered an enormous blow to the then prime minister, Tony Abbott, and was a factor in the first (“empty chair”) move against his leadership.

Labor Premier Annastacia Palaszczuk has announced the state election as the Turnbull government is reeling from Friday’s High Court judgment, which knocked out of parliament Deputy Prime Minister Barnaby Joyce, now campaigning in a New England byelection, as well as Joyce’s deputy Fiona Nash, who has no immediate way back.

While being careful to sound respectful of the High Court – after earlier (wrongly) anticipating its decision – the Coalition is smarting from a judgment that adhered to black letter law rather than accepting the more creative interpretation of the Constitution’s Section 44 that the government urged.

Attorney-General George Brandis on Sunday described it on Sky as “almost brutal literalism”. Well, it’s the Coalition that has always railed against judicial adventurism.

One question in the judgment’s wake will be whether the ministerial decisions that Joyce and Nash took are challenged. Labor’s Tony Burke suggested on the ABC that “vested interests” could consider contesting, for example, decisions Joyce made in quarantine matters.

Surely the risk would be highest in relation to decisions taken when the pair knew the constitutional ice could break under them. That was always an argument for their standing aside, as Matt Canavan did (in the end he survived and has been restored to the cabinet).

To clean up untidy ends, Turnbull delayed until Sunday night his departure for Israel to attend the commemoration of the 100th anniversary of the Battle of Beersheba.

Deputy Liberal leader Julie Bishop is acting prime minister while he’s away, with Turnbull insisting the acting parliamentary leader of the Nationals, Nigel Scullion, was “absolutely in support of this arrangement”. That assertion followed suggestions of some tetchiness between the parties on the matter.

Just in case Bishop might get any inflated opinion of her situation, Turnbull pointed out that “when I’m overseas, I continue to discharge all of my duties as prime minister. All decisions that are taken by the prime minister are taken by me.

"The acting prime minister is a role that is really designed to cover circumstances where, for example, it was urgent for a document to be signed, with my consent, obviously, but I’m not in the country to sign it. Or, of course, in the event of some disaster occurring while I was travelling.” There will be no deputy prime minister while the New England byelection is on.

Turnbull has a busy schedule of international travel in coming weeks, including APEC and the East Asia summit. Any appearance in the Queensland campaign can be expected to be minimal. As Newman told Sky: “Malcolm Turnbull doesn’t go down well in Queensland”. Newman also noted Joyce would have been good there, but he is tied up south of the border.

No wise person would bet too heavily on the Queensland result. Insiders on both sides of politics are predicting One Nation is likely to hold the balance of power. The parliament has been hung – the ABC’s analyst Antony Green says that given Queensland is moving to fixed terms the ALP will run hard on the importance of avoiding minority government. “Stability is a big issue in Queensland,” Green says.

Queensland is a critical state for the federal Coalition and so for its fortunes at the next election. A serious rebuff to the Liberal National Party there would create deep alarm in the Coalition.

A lot of variables make the state election particularly hard to read. The parliament’s size has been increased and boundaries redrawn. Voting will be a compulsory preferential system rather than the previous optional preferential.

Green says: “Both sides of politics need to increase their vote to win … But both have lost first preferences since One Nation came back on the scene”.

One Nation is a significant player, in terms of both how many seats it could pick up and what will happen with its preferences.

This is Pauline Hanson’s stamping ground – though she got caught out by being overseas when Palaszczuk called the election, despite it having been much flagged beforehand.

Green predicts One Nation could win five or six seats but not the 11 it secured in 1998. “It can win seats off the LNP. It’s tougher for it to win them off Labor.”

Much will depend on what the LNP does with preferences, Green says. The LNP has ruled out any across-the-board preference deal. One Nation has said it will put sitting members last. Labor will preference against One Nation.

While the strength of the One Nation state vote won’t be a accurate guide to the minor party’s influence in Queensland federally, it will be a pointer to how much momentum Hanson has.

Labor has maintained a 54-46% two party lead in the Newspoll in Monday’s Australian – the 22nd consecutive Newspoll in which the Coalition has been behind.

Both leaders lost ground on their net approval, although the Prime Minister took the bigger hit. Malcolm Turnbull has gone from a net satisfaction rating of minus 24 to minus 28, while Bill Shorten’s net rating has deteriorated from minus 22 in the last poll to minus 24.

Turnbull’s lead as better prime minister is unchanged at 41-33%.

The Coalition primary vote has fallen a point to 35%; Labor is steady on 37%. Greens on 10% and One Nation on 9% were unchanged.

The poll of 1623 was taken from Thursday to Sunday, amid controversy around Employment minister Michaelia Cash, as well as Friday’s High Court decision.