Have you noticed that some of Australia’s favourite baked goods, such as croissants and buttery biscuits, have been creeping up in price? This becomes less surprising when one considers that globally, the price of butter has risen by around 60% over the past year.

While butter prices have more than doubled since July 2016, farm-gate milk prices in most producing areas have remained stable. Is there a paradox? Not really. The key ingredient butter producers require is not just the milk - but rather the milk fat.

What is driving the butter price spike?

Despite relatively stable milk production levels, butter production has dropped in some of the major producing countries since late 2016. In the European Union, butter production for the first 6 months of 2017 was about 5.5% lower than during the same period in 2016.

The reasons for lower butter production levels in Australia are complex. First, we are seeing lower than usual milk fat levels and the diversion of milk fat solids towards the processing of higher value-added dairy products such as cheese and cream, to meet a rising demand from Asian and US markets. 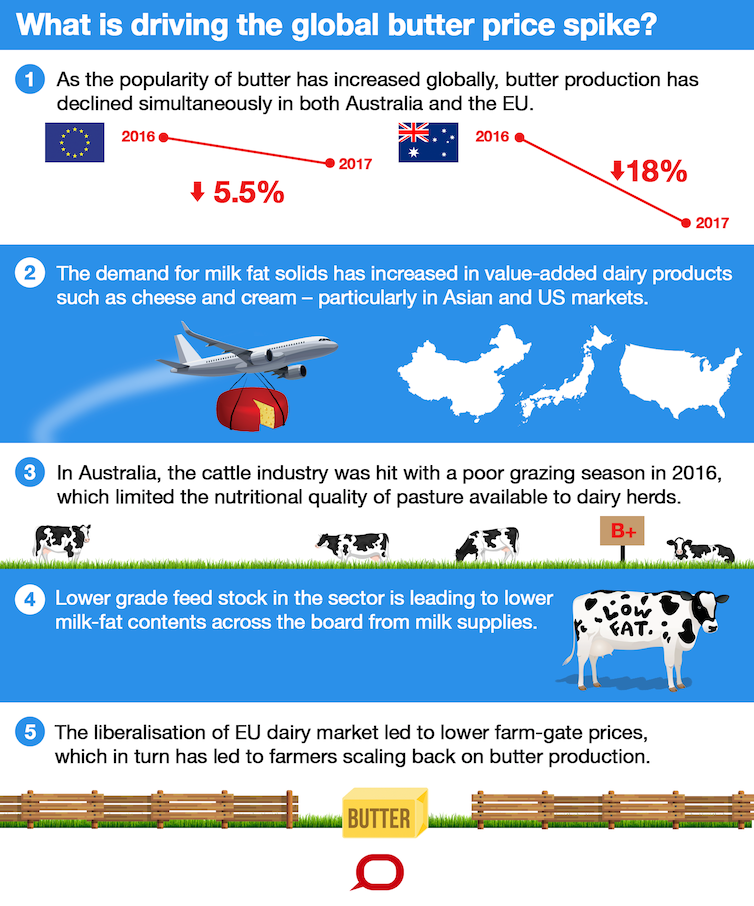 The Conversation, CC BY-ND Dairy products competing for milk fat contents The level of milk fat percentage, as well as the composition of fat in cows, is controlled by a variety of genetic and nutritional factors. In Australia, a poor 2016 grazing season limited the pasture nutritional quality available to dairy herds. Similarly, in the European Union, there is a higher share of young females in the herd and a lower use of energy-rich feed led to lower milk fat contents. Despite record butter prices, producers know that the best financial returns are obtained when processing milk into value-added products like cheese or cream. Cheese production, whether in Europe or Australia, has been boosted by strong export markets to Asia and the US, and rising domestic demand. Similar trends have been observed for cream. The interesting point here to note is that butter production needs more milk than cheese production, and yet cheese commands traditionally higher prices than butter. The impacts of EU dairy quotas The 2015 lifting of the EU dairy quotas combined with the ban on EU food imports from Russia have partly set the scene for this development. The liberalisation of the EU dairy market drove farm-gate prices down and led farmers, across Europe, to scale back on production with the assistance of subsidy schemes. In some cases primary producers under milk contracts were unlikely to reduce herd sizes but for them, the affordability of quality supplement feed has become an issue. Moreover, the end of milk quotas brought volatility to the EU dairy sector and left member states with no intervention stocks (stocks held by national intervention agencies in the EU) to regulate market prices. Limited export availability in major dairy producing countries has led to significant price surges - although prices on commodity markets vary across regions. For example, in the EU, the latest market price for a ton of butter were at A$9,318, in the Oceania region a ton of butter fetched A$7,548 while in the US it reached A$6,589. Recently, the strong euro has made European commodities particularly expensive. Just as currency exchange rates partly explain the price differences witnessed on world markets, it has also set the scene for competitive tensions among exporting countries. Implications for Australia Understandably, lower national production levels have resulted in lower exports. However, if Australian exports of butter and butter oil have been negatively impacted over the last year, exports of other dairy products like cheese or skimmed milk products have enjoyed healthy growth. On the demand side, taste for butter is enjoying a renaissance in some parts of the world like Australia, the UK, or the US on the back of scientific reports reinstating the virtues of saturated fats and of butter. Australian consumers, for example, are now buying more butter than margarine, and the average Australian now eats 4kg of butter a year. Furthermore, demand for butter from industry is likely to remain stable as food processors cannot easily change recipes and switch to vegetable fat. Even if milk producers are unlikely to get higher farm-gate prices, higher butter prices may drive bakeries and other food processors to continue to increase products prices. If Australian bakers were to follow the footsteps of their French counterparts, we could see the price of a croissant go up further. In recent days, the price of the croissant in France has risen by 10 cents to retail now for about 1.10 euro. Australian biscuit-eaters may bear the brunt of high butter prices as well. Butter price relief on the horizon Expect butter prices to remain high (although below current levels) as strong global demand for dairy products is expected to continue. There may be good news on the way, however. According to the latest EU forecasts, increased production of fattier milk in the second half of 2017 should lead to a correction of market prices, even if it may take a while for butter stocks to replenish. The EU expects its butter production to rebound in 2018. According to Dairy Australia, Australia’s dairy industry has begun recovering, and the forecasts for 2017-18 are promising. Let’s hope that there will be enough fat for our butter, and enough butter for our croissants.