It would do great disservice to Tree of Codes to consider it in dramatic terms. When it comes to the possible plot, emotions or even themes expressed, your guess is as good as mine. What we are often taught to expect from theatre – a gripping narrative rounded off with emotional catharsis – is a misleading framing for this work. No doubt this is the hidden expectation behind so many complaints of it being a “cold” performance.

The thread of connections between these artists’ works is tenuous and very light in touch. Foer literally cut up Shulz’s words, all-but-excising the heavily symbolic family narrative. Take the right letters out and “Street of Crocodiles” became “Tree of Codes”.

Jamie xx used an algorithm to turn such cut-up pages, their words and spaces and voices, into vocalisations and rhythmic structures. Centre-stage, Wayne McGregor translated – perhaps – the leap between nature and technology, suggested by the title, into a complex choreography of atomic complication from base elements to fully formed society.

And Olafur Eliasson returned to colour-effect glass, one of his favourite materials, to create a vibrant candy-coloured container for the work, highly attuned to the shifts in the music, but operating on its own dramaturgy of slow reveal and layering. 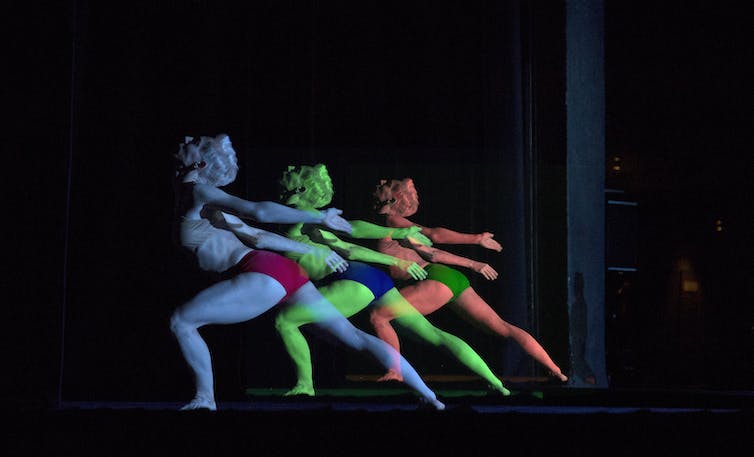 Very disciplined play with perception is at the heart of each of these artists’ works, but in very different and not necessarily related ways. All the heavy lifting in Tree of Codes is done by McGregor’s excellent dancers. They kick off the performance in pitch dark, as invisible figures with small lights attached, dancing themselves into mesmerising constellations.

From here, another fascinating sequence: a row of performers invisible but for an arm pushed through a mirrored funnel, the choreography refracted and multiplied into something like a fleshy flower, or a supernova. These are phenomenal stage scenes, signalling something like the birth of the universe.

From there on, McGregor leads us through a sequence of movement pieces that take us from a primeval, Adam-and-Eve, flesh-coloured costume sort of innocence to a massing of bodies reminiscent of Hieronymus Bosch’s earthly delights. Pointe shoes and coloured costumes are thrown into the mix, alongside choreographies of love and desire, and so on.

McGregor’s choreography has always had the ability to conjure split-second visual references: the elegance of Olympic sports, classical poses from Renaissance paintings, insectoid androids of the future. It can feel like big data crunched into movement. The movement is very distinct, with its absolutely rigid hips and waist, and all the dynamism concentrated in strong kicking legs and shoulders, as well as the flinging – no other way to call it – of female dancers.

They might be the best dancers in the world, and yet there is a flatness that their enormous skill engenders. Watching them contort and twist one another with apparent effortlessness, it is so easy to forget that not all movement requires equal effort, that flinging one’s leg vertical is not as easy as extending an arm horizontally. The effect is machine-like, a set of requirements for the dancing body that in themselves are strenuous and applause-worthy, but lose some of their impact because there is no emotion to it. It is body become (very competent) robot.

Eliasson’s set is, to me, the highlight of the work, due to its exquisite use of reflection to shape movement, and of colour to shape mood. Gradually, a series of one-way mirrored backdrops amplifies the duets and trios into entire societies, painting them yellow for intensity, or blue for fuzzy distance.

Towards the end, as Jamie xx’s music brings about whiffs of German nightclub Berghain, the climax of the piece is generated almost entirely by the set. The glass screen that has descended onto the proscenium, between us and the dancers, opens up two windows slowly spinning round. As they turn, it is revealed that the cold blue light bathing the dancers is an illusion, tinted glass – they are dancing in bold, warm red. 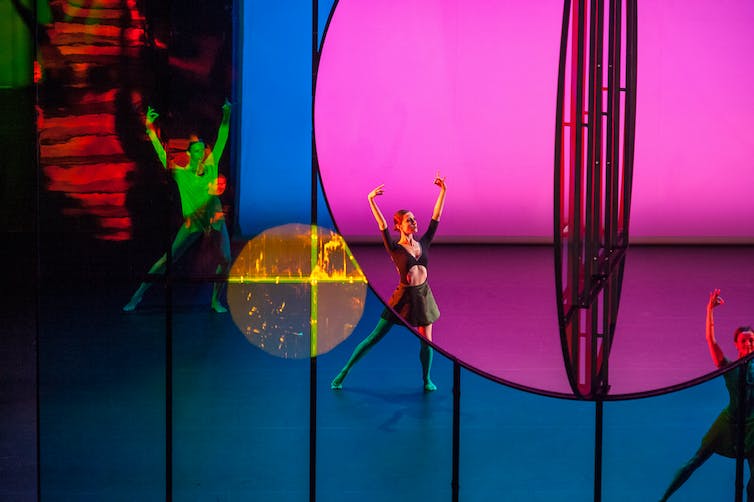 Watching Tree of Codes at times feels like staring into the insides of a Swiss clock. This is why considering it dramatically is of no use. It is a phenomenally well executed show, but its brilliance is entirely in the stagecraft, in the technical accomplishments, the marriage of sound and set, movement and concept, the way it all comes together. How (and whether at all) it relates to early-20th-century modernism, I don’t know – but it is a feat of many-media intertextuality that makes one ponder the expressive use of technology of our time.

Performance mega-projects have been a staple since classical opera and ballet, forms that have been described as the “non-dramatic entertainment spectacle” branch of the performing arts.

But lately, mega-projects have been turning towards popular music and contemporary dance: think Tomorrow, In A Year, an opera on Charles Darwin’s life by Danish performance artists Hotel Pro Forma and Swedish experimental pop group The Knife; or Shell Shock by Nick Cave and Sidi Larbi Cherkaoui.

Might this nascent form become the opera of the future? If so, we should develop a language to judge its technical prowess, rather than emotional realism.

Tree of Codes is showing as part of the Melbourne Festival until October 21.