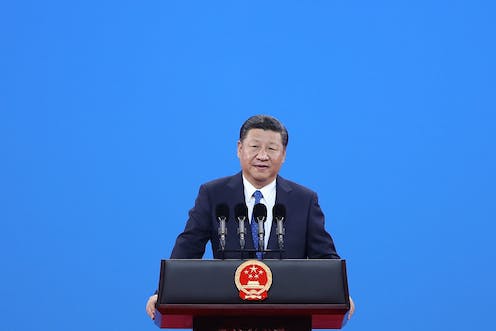 They may not be co-ordinated, nor linked in any way. But two events in Asia over the next week will help define Australia’s political and security environment for the next period.

First is the convening of the five-yearly Communist Party of China congress. This gets underway on Wednesday with a much-anticipated “work report” from party boss Xi Jinping.

Second is be the Japanese elections scheduled for October 22. Prime Minister Shinzo Abe is bidding to become the longest-serving leader of his country. He seems determined to enlarge Japan’s security footprint by continuing to beef up its defence forces and seek changes to its pacifist post-war constitution.

From an Australian perspective, the North Korean nuclear crisis invests both the reaffirmation – and strengthening – of Xi’s leadership for another five years, and the re-election of Abe, with particular importance.

A glance at the factsheets compiled by the Department of Foreign Affairs and Trade underscores the overwhelming economic importance of China and Japan to Australia’s wellbeing.

Japan’s economic and security importance to Australia tends to be underplayed. But it’s worth noting that Japanese investments in Australia are more than double China’s.

Xi’s signature statement to the party congress assumes critical importance given China’s expanding global leadership amid concerns about the Trump administration’s commitment to such a role. Each word and sentence will be parsed for its implications for regional and global security, and for the direction in which he plans to take the world’s second-biggest economy over the next five years.

This will be a speech – given the circumstances of China’s continued rise – that will rank with a US presidential State of the Union address.

The party congress will stretch over the best part of a week, and will be closely observed for indications of Xi’s continuing efforts to strengthen his grip on China’s leadership. As things stand, he has emerged as the most powerful Chinese leader since Deng Xiaoping.

Given his relative youth in Chinese leadership terms, the 64-year-old Xi may well be ruling for the next decade – in other words an additional five-year term past 2017 to 2022. This is well past a nominal retirement age of 68.

In a paper for the Carnegie Endowment for International Peace, Michael Swaine painted a generally optimistic picture of China’s continued evolution under a dominant Xi. However, he also acknowledged that China’s continued rise would inevitably result in tensions over:

… trade, investment, sovereignty rights, and a variety of anxieties involving Chinese and US or Japanese military forces in the Western Pacific.

There’s no doubt Xi and the Chinese leadership are seeking to more effectively use China’s growing international presence to promote the nation’s interests in such sensitive. As a result, tensions with China will in fact likely increase.

The good news is that, rather than marking a turn toward confrontation between China and the West and Japan, the 19th Party Congress will likely signal a high level of stability and continuity in Chinese foreign policy. The bad news is that this continuity is unlikely to reduce the most serious challenges facing China’s relations with the United States and its allies.

In all of this, Japan’s importance in regional security calculations is likely to come more sharply into focus in the next period. This is investing Abe’s likely re-election with a super majority in the Diet in partnership with his Komeito allies with more-than-usual significance.

Latest opinion polls are predicting a surprisingly big win for the Abe-led Liberal Democratic Party (LDP) after indications he may have been struggling against the New Hope Party, which was formed on the eve of the election campaign by Tokyo Governor Yuriko Koike.

According to a poll in the Yomiuri newspaper and Kyodo news agency, the LDP-led coalition is on track to win 300 or more seats in the 465-member lower house. This would be an improvement on its standing in the previous parliament.

If the Abe-led coalition is returned with a substantial majority, he is likely to push forward with attempts to revise Japan’s pacifist post-war constitution to enable a clearer definition of Japan’s military to enable it to assert itself militarily – if necessary.

Such a development would have implications for Australia’s growing security relationship with Japan. This partnership has not attracted much attention, but it has been substantial and evolving since a Joint Defence and Security Agreement was struck in 2007.

The two countries have progressively upgraded a bilateral Acquisition and Cross Services Agreement that enhances interoperability between the Australian Defence Force and the Japanese Self-Defence Force. Australia and Japan have also declared a Special Strategic Partnership aimed at strengthening security ties in the Indo-Pacific.

What’s driving closer defence co-ordination between the second world war protagonists is concerns about China’s rise, and the implications for a regional power balance. This would seem to be a prudent course.

In the aftermath of the Communist Party congress and the Japanese election, with Xi and Abe’s positions enhanced, it might be reasonable to assume that the sometimes-tense relations between China and Japan will take a turn for the better. Concerns about instability on the Korean Peninsula should provide a catalyst for greater co-operation, and a lessening of tensions over territorial disputes.

An early opportunity for a show of amity will come at next month’s APEC forum in Vietnam. This will also be attended by US President Donald Trump.

Abe is thought likely to press China for a long-delayed summit with Chinese Premier Li Keqiang and South Korean President Moon Jae-in. North Korea would be a focus of those discussions. For its part, China is anxious that Japan lend its weight to the China-led Asian Infrastructure Investment Bank.

One indication that Abe is anxious to improve ties with China is that no cabinet ministers in Abe’s party visited the Yasukuni Shrine on the August 15 anniversary of the war’s end. China has previously angrily protested these visits.

From an economic perspective, close attention will be paid to statements by Xi and others at the party congress on China’s GDP growth targets and economic priorities for the next five years. Indications from the first half of this year are that China’s growth will exceed a 6.5% target for 2017. The economy has been strengthening in the second half of this year thanks, in part, to a construction boom.

In the end, China-watchers will be animated by personnel shifts in the Chinese leadership evidenced by announcements of a newly constituted Central Committee, Politburo, and, most importantly, Standing Committee of the Politburo.

When these personnel shifts are unveiled they will reveal the extent to which Xi has strengthened his power over the party apparatus, and thus over China. The betting is this will be a win-win for Xi.