The Great Barrier Reef is suffering from recent unprecedented coral bleaching events. But the answer to part of its recovery could lie in the reef itself, with a little help.

In our recent article published in Nature Ecology & Evolution, we argue that at least two potential interventions show promise as means to boost climate resilience and tolerance in the reef’s corals: assisted gene flow and assisted evolution.

Both techniques use existing genetic material on the reef to breed hardier corals, and do not involve genetic engineering.

But why are such interventions needed? Can’t the reef simply repair itself?

Damage to the reef, so far

Coral bleaching in 2016 and 2017 took its biggest toll on the reef to date, with two-thirds of the world’s largest coral reef ecosystem impacted in these back-to-back events. The consequence was widespread damage. 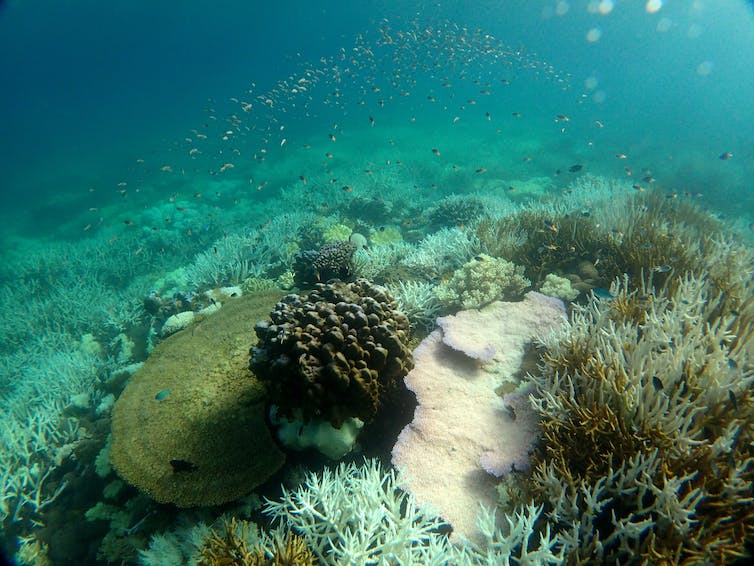 Bleached corals on the central Great Barrier Reef at the peak of the heat wave in March 2017. Most branching corals in the photo were dead six months later. Neal Cantin/AIMS, CC BY-ND

Reducing greenhouse gas emissions will dampen coral bleaching risk in the long term, but will not prevent it. Even with strong action to tackle climate change, more warming is locked in.

So while emissions reductions are essential for the future of the reef, other actions are now also needed.

Even in the most optimistic future, reef-building corals need to become more resilient. Continued improvement of water quality, controlling Crown-of-Thorns Starfish, and managing no-take areas will all help.

But continued stress from climate change – in frequency and intensity – increasingly overwhelms the natural resilience despite the best conventional management efforts. Although natural processes of adaptation and acclimation are in play, they are unlikely to be fast enough to keep up with any rate of global warming.

So to boost the reef’s resilience in the face of climate change we need to consider new interventions - and urgently.

That’s why we believe assisted gene flow and assisted evolution could help the reef.

Delaying their development could mean that climate change degrades the reef beyond repair, and before we can save key species.

What is assisted gene flow?

The idea here is to move warm-adapted corals to cooler parts of the reef. Corals in the far north are naturally adapted to 1C to 2C higher summer temperatures than corals further south.

This means there is an opportunity to build resistance to future warming in corals in the south under strong climate change mitigation, or to decades of warming under weaker mitigation.

There is already natural genetic connectivity of coral populations across most of the reef. But the rate of larval flow from the warm north to the south is limited, partly because of the South Equatorial Current that flows west across the Pacific.

The South Equatorial Current splits into the north-flowing Gulf of Papua Current and south-flowing East Australian Current off the coast of north Queensland. This means coral larvae spawned in the warm north are often more likely to stay in the north.

So manually moving some of the northern corals south could help overcome that physical limitation of natural north-to-south larval flow. If enough corals could be moved it could help heat-damaged reefs recover faster with more heat-resistant coral stock.

We could start safe tests at a subset of well-chosen reefs to understand how warm-adapted populations can be spread to reefs further south. 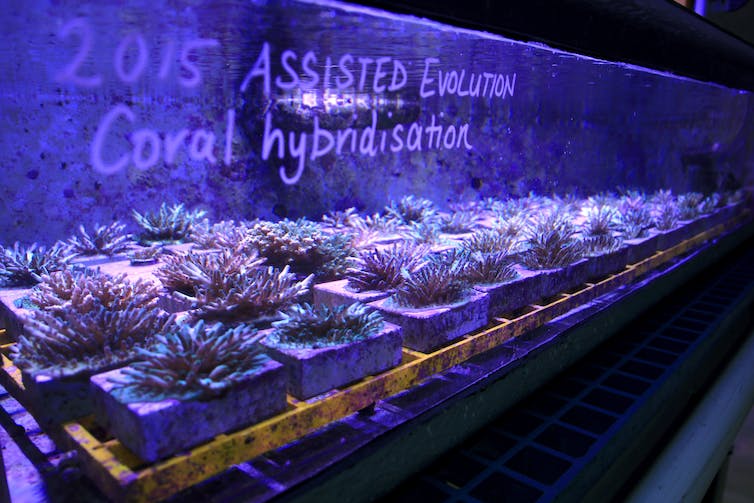 These two-year old corals reared in AIMS’s National Sea Simulator are hybrids between different species of the genus Acropora. They are the results of artificial selection under experimental climate change and show tolerance to prolonged heat stress expected in the future. Neal Cantin/AIMS, CC BY-ND

What is assisted evolution?

While assisted gene flow may be effective for southern or recently degraded reefs, it will not be enough or feasible for all reefs or species. Here, we argue that assisted evolution could help.

Assisted evolution is artificial selection on steroids. It combines multiple approaches that target the coral host and its essential microbial symbionts.

These are aimed at producing a hardier coral without the use of genetic engineering. Experiments at the Australian Institute of Marine Science are already making progress, with results yet to be published.

First, evolution of algal symbionts in isolation from the coral host has been fast-tracked to resist higher levels of heat stress. When symbionts are made to reengage with the coral host, benefits to bleaching resistance are still small, but with more work we expect to see a hardier symbiosis.

Secondly, experiments have created new genetic diversity of corals through hybridisation and researchers have selected these artificially for increased climate resilience.

Natural hybridisation happens only occasionally on the reef, so this result gives us new options for climate hardening corals using existing genetic stocks.

The danger of doing nothing?

The right time to start any new intervention is when the risk of inaction is greater than the risk of action.

Assisted gene flow and assisted evolution represent manageable risk because they use genetic material already present on the reef. The interventions speed up naturally occurring processes and do not involve genetic engineering.

These interventions would not introduce or produce new species. Assisted gene flow would simply enhance the natural flow of warm-adapted corals into areas on the reef that desperately need more heat tolerance.

Risk of increasing the spread of diseases may also be low because most parts of the Reef are already interconnected. A full understanding of risks is an area of continued research.

These are just two examples of new tools that could help build climate resilience on the reef. Other interventions are developing and should be put on the table for open discussion.