Laser Beak Man, the madcap superhero creation of artist Tim Sharp, who has autism, flew into La Boite’s Roundhouse theatre Wednesday night, to the rapture and delight of the Brisbane Festival audience.

Charged with the not insignificant task of keeping Power City alight, our hero Laser Beak Man must face off his estranged childhood friend and arch nemesis Mr Peter Bartman and so retrieve, from Peter’s clammy hands, the underground crystals that supercharge both Laser Beak Man and the city itself.

Thank god, there is much to learn about people, relationships and coming together in every good superhero’s personal trajectory, such that ultimately, goodness will triumph. Conceived when Sharp was 11, Laser Beak Man has been powering through exhibitions, animated series and now theatrical productions as a most determined and yet quiet achiever.

The show has been written by David Morton, Nicholas Paine and Sharp, and directed by Morton. It was brought to life by the Dead Puppets Society along with the sweet songs of Sam Cromack from Ballpark Music. Laser Beak Man busts through the fourth wall to charm and mesmerise young and old.

An apt venue for such anarchic fun, the production played as part of a suite comprising the festival’s Theatre Republic venue. Indeed, the spirit of late 19th century surrealist theatre was evident. The opening provocation of symbolist writer and playwright Alfred Jarry’s 1896 play Ubu Roi, “Merdre!”, is not too far out of kilter with a show hell-bent on magic, mayhem and many an inside joke. 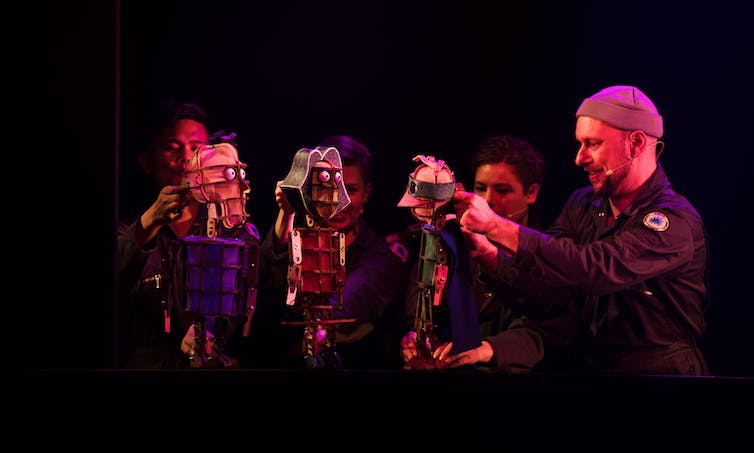 Puppeteers shared the limelight with their puppet prostheses. There was much joy to be had in watching the puppeteers’ antics as they channelled whole-hearted performances through their wooden avatars. It was almost as if, with puppet foil up front, the (so not) Dead Puppeteers were freed up for some of the most uninhibited and authentic acting I’ve witnessed. This doubling-up of performance between puppet and mentor was captivating. Swinging between watching these larger-than-life (yet clearly lifeless) puppets and the performers who animated them, was for me strangely energising.

US historian Norman Klein wrote, discussing animation (my comfort zone), that cartoon mechanics are never far from the viewer’s mind in their enjoyment of the illusion. He compared this to the 17th century theatrical apparatus machina versatilis, which provided the means for switching the backdrops between alternating theatrical scenes:

The audiences seemed more fascinated by the technology (of these extravagant theatrical machines), than the masque.

Laser Beak Man provided much opportunity for this particular enjoyment of alternating between childlike immersion in the magic up front, and an appreciation of the craft and artistry behind and yet so clearly on show.

Seamless transitions between scenes, and between media, were attended by the furious pitter-patter of the puppeteers, as video imagery, animation, music and song swung us into a dynamic world of shifting perspectives and heady flights. Much kudos must go to the designers, director, producers, fabricators, managers, dramaturgs and others in greasing the cogs of such a well-oiled machine.

The vibrant pop art of Tim Sharp crammed every nook and cranny in making real our fantasy world of Power City, foundation for puppet histrionics and their soaring aspirations, while the warm and plaintive vocals of Sam Cromack and his able band stitched it all so nicely together. Fabulous.

And without spoiling further theatrical treats, technical toys and old time tricks extended the conceit beyond the proscenium. Along for the ride in a classic (super) hero’s tale, we all truly inhabited Power City for its 90 minutes; there was buzz and elation among the happy throng, as my 11-year-old and I lasered for the outside world, emboldened and energised.

Laser Beak Man is showing at the Roundhouse until September 30.