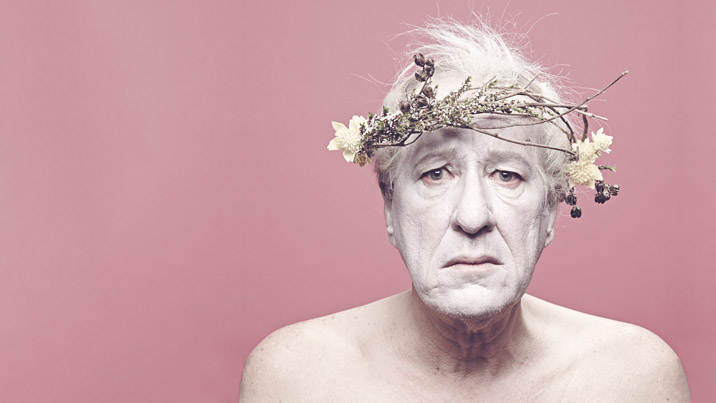 The long-shared history of two of Australia’s leading artists, director Neil Armfield and actor Geoffrey Rush, is at the centre of Sydney Theatre Company’s (STC’s) new production of William Shakespeare’s King Lear. The master portrait of a man in decline, attempting to reconcile the reality he has constructed in his mind with the physical world around him, is at Roslyn Packer Theatre from 24 November 2015 to 9 January 2016.

The aging Lear (Rush) makes a surprising decision. He’ll hand over his kingdom to his three daughters and their husbands: the clever Goneril (Helen Buday) who is married to Albany (Alan Dukes); the dangerous Regan (Helen Thomson) wed to Cornwall (Colin Moody); and the courageous Cordelia (Eryn Jean Norvill), a possible wife to Burgandy (Nick Masters) or France (Wade Briggs). To determine their share, each of the siblings must make a public declaration of their love for their father. Not even the intercession of his loyal friend Kent (Jacek Koman) can quell Lear’s irrational rage when Cordelia refuses. Her “nothing” will reverberate in Lear’s reality for the rest of his life.

He is not the only father making disastrous decisions about his children. Gloucester (Max Cullen) is tricked by one son Edmund (Meyne Wyatt) about the motives of his other, Edgar (Mark Leonard Winter), with diabolical consequences for them and for the king. And as Lear descends into the chaos of his imagination, not even his trusted Fool (Robyn Nevin) can draw him away from the harrowing void in which he finds himself.

Armfield’s last production for STC was the 2013 adaptation by Andrew Bovell of Kate Grenville’s The Secret River, to be remounted for performances in Sydney, Melbourne and Brisbane in 2016. Rush is back at STC for the first time since 1993 when he played opposite newcomer Cate Blanchett in David Mamet’s Oleanna.

The first production to feature both Armfield and Rush in its list of credits was the 1980 Nimrod production of Clouds by Michael Frayn, with Rush as Mime Consultant and Armfield as director. Their more familiar working relations (with Geoffrey as actor) began the following year in David Hare's Teeth 'n' Smiles. Since then, legendary collaborations have included STC’s The Government Inspector and Uncle Vanya, and for Belvoir, ground breaking productions of The Alchemist, The Small Poppies and Hamlet as well as the internationally touring Diary of a Madman and Exit the King. Armfield has also directed Rush in the films Candy and Holding the Man.

Set and costume designs are by Robert Cousins and Alice Babidge respectively, Armfield’s collaborators for Opera Australia’s 2013 The Ring Cycle, with Lighting Design by Nick Schlieper. John Rodgers is composer with sound design by Stefan Gregory.

Suncorp Twenties become available for King Lear from 17 November 2015. Suncorp Twenties (a selection of $20 tickets for every performance) are released for sale each Tuesday at 9am for the following week’s shows (Monday to Sunday).