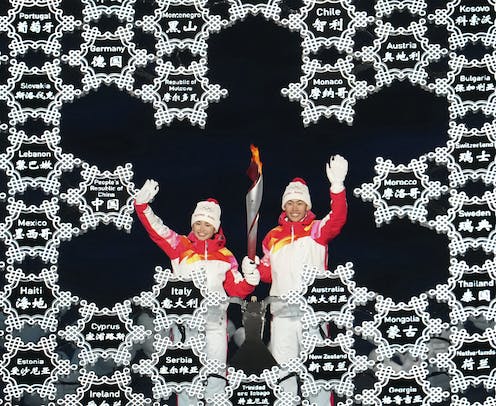 Many issues have cast a shadow over the Beijing Winter Olympics in recent weeks, from China’s controversial “zero-COVID” approach to the looming possibility of a Russian invasion of Ukraine.

One issue should be getting more attention: what I and other scholars are calling the “Xinjiang...

Many issues have cast a shadow over the Beijing Winter Olympics in recent weeks, from China’s controversial “zero-COVID” approach to the looming possibility of a Russian invasion of Ukraine.

One issue should be getting more attention: what I and other scholars are calling the “Xinjiang emergency” – the mass detention of between one million and two million Uyghurs and other Turkic Muslim minorities in China’s western Xinjiang region.

To many observers, China attempted to sportwash its human rights abuses in Xinjiang by selecting a cross-country skier of Uyghur origin to take part in the lighting of the Olympic cauldron during the opening ceremonies of the games.

Although the move attracted criticism from human rights activists, there’s been virtual silence from governments and corporate sponsors on the Uyghur issue since the Olympics began. Without any real action to put pressure on Beijing, China’s propaganda machine will continue to deflect accountability, instead touting the false narrative that Uyghurs enjoy a “peaceful, harmonious and happy life”.

How China is persecuting the Uyghurs

In a recently published book I edited, The Xinjiang Emergency, some of the world’s top scholars on Uyghur history, culture, politics and identity provide a detailed examination of the long-term causes and consequences of China’s repression in Xinjiang.

Manchester University Press Since the mass detention of Uyghurs began in 2016, it has become clear the Chinese Communist Party (CCP) has embarked on a systematic and coordinated effort to erase Uyghur culture and remake the Uyghurs into pliable and “productive” citizens through “reeducation”. As part of this process, children have been separated from their parents to be placed in state care, Uyghur women subjected to invasive birth control and sexual abuse, and detainees “graduated” into a system of forced labor. Read more: How an independent tribunal came to rule that China is guilty of genocide against the Uyghurs The state has also prohibited the use of the Uyghur language, script and signage, imposed new legal restrictions on religious practice, razed mosques and other religious sites, used financial inducements to encourage intermarriage with the dominant Han ethnic group, and persecuted the Uyghur intelligentsia. A high-tech surveillance apparatus has also been erected across Xinjiang to monitor everyday life. A genocide is taking place Our group of scholars has concluded the Chinese state’s actions are consistent with the attempted cultural genocide of Uyghurs. Only a few governments around the world have gone as far as to label it a “genocide”. The French parliament was the latest to do so on the eve of the Olympics, following in the footsteps of the US government and parliaments in Canada, the Netherlands and the UK. But what has the international community done about it? So far, it has been long on hand-wringing and rhetorical “concern” for Uyghurs, but short on practical measures beyond the sanctions imposed on Chinese individuals and entities responsible for the repression. A small group of countries also took part in a diplomatic boycott of the Beijing Olympics, but this was largely seen as a symbolic gesture. These countries still sent teams to compete in an event that Chinese President Xi Jinping has declared will help present China as a positive, prosperous and open nation committed to building a community with a shared future for mankind. Not since the 1936 Berlin Olympics in Nazi Germany have the games been held amid such a wanton violation of basic human rights. And the CCP’s actions against the Uyghurs have been well-documented for nearly five years. Read more: Despite China's denials, its treatment of the Uyghurs should be called what it is: cultural genocide Although there is evidence some Uyghurs have been killed in detention, genocides aren’t just defined by mass killings. The CCP’s actions in Xinjiang do meet the criteria for genocide under the UN Convention on the Prevention and Punishment of the Crime of Genocide. This document deems a range of acts to constitute “genocide” if the intent is to destroy a national, ethnic, racial or religious group, including: causing serious bodily or mental harm to members of the group deliberately inflicting “conditions of life” intended to bring about a group’s physical destruction (such as withholding food, medical care, shelter or clothing) imposing measures intended to prevent births forcibly transferring children to another group.

Protesters rally against the Beijing Olympic Games in front of the Chinese embassy in Seoul, South Korea, this week. Ahn Young-joon/AP

The failure of the international community to respond to the Uyghurs’ plight speaks to the self interest of governments, multinational corporations and organisations like the International Olympic Committee to retain profitable relations with Beijing. It also shows the hollowness of many governments’ commitments to the much touted “rules-based order”.

Australia’s foreign minister, Marise Payne, for example, made this a priority when she said in June 2020 that Australia was committed to the “norms that underpin universal human rights, gender equality and the rule of law”.

Read more: Why the Winter Olympics are so vital to the Chinese Communist Party's legitimacy

This is a sentiment shared by many of the states that have condemned China’s actions in Xinjiang. Yet, it has not been translated into real action likely to increase pressure on Beijing.

Is this trumpeting of a commitment to “universal human rights” little more than a moral platitude? If not, then the international community must ask itself why there has not been stronger action against the largest and most systematic repression of an ethnic or religious minority in the world today.