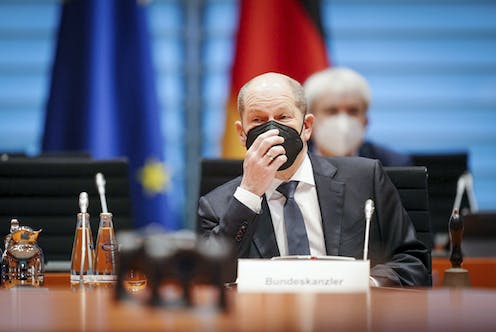 Germany has announced plans for a new climate alliance between the world’s advanced economies, in a move that promises to transform international climate action.

This year, Germany is the president of the G7 – a key forum for wealthy democracies to discuss solutions to global challenges.

Germany has announced plans for a new climate alliance between the world’s advanced economies, in a move that promises to transform international climate action.

This year, Germany is the president of the G7 – a key forum for wealthy democracies to discuss solutions to global challenges.

The proposal should ring alarm bells in Canberra. It is likely to mean economic and diplomatic costs for Australia, and further isolate this nation as a climate laggard on the world stage. To avoid this, Australia should at least match the climate ambition of G7 countries, by pledging to halve greenhouse gas emissions this decade.

What is a climate club?

The “climate club” concept was developed by Nobel-prize winning economist William Nordhaus in 2015, and has since gained ground in international policy circles.

United Nations climate agreements – such as the 1997 Kyoto Protocol and the 2015 Paris Agreement – are voluntary. Nordhaus argues this provides an incentive for some nations, overly focused on their own national interests, to seek to minimise their share of the global costs of climate action.

So while responsible nations bear the cost of switching to new, cleaner technologies, the “free-riding” nations benefit from those technologies and a potentially safer climate while failing to make adequate cuts to their own domestic emissions.

To address this problem, Nordhaus proposes a “club” model for climate cooperation. Club members – those countries who move first to take climate action – would be rewarded and protected from competitive disadvantage.

Members would harmonise their plans to reduce greenhouse gas emissions and work toward a shared goal. And nations that do not meet their global obligations would incur penalties, such as a levy on exports to club member nations.

Read more: Japan wants to burn ammonia for clean energy – but it may be a pyrrhic victory for the climate

How the G7 could become a climate club

Just a month after being elected German chancellor, Olaf Scholz announced at the World Economic Forum in January that Germany intends to turn the G7 into the nucleus of an international climate club.

Scholz has been keen on the climate club idea for some time. Last August, as Germany’s finance minister, he proposed an “A-B-C” model that would be:

A G7 climate club could build on the experience of the European Union. The EU already has an internal carbon market and will next year start imposing border levies on imported goods, based on the emissions generated in their production. The highest costs will be borne by exporters from countries that don’t have a carbon price or meaningful climate policy.

Scholz suggests G7 countries could negotiate similar arrangements to those of the EU. The G7 countries will consider Germany’s proposal at ministerial meetings this year.

Climate policy is a key priority for the Biden administration in the US, providing a window of opportunity for positive negotiations.

And there are already moves to set shared standards across the Atlantic. In October last year, the EU and the US announced they were working towards a world-first deal to restrict access to their markets for high-carbon steel.

What this means for Australia

Australia is widely seen as a free-rider in global climate efforts. While G7 member states have promised to cut their emissions by about 50% this decade, Australia has pledged only to cut emissions by 26-28% from 2005 levels.

At last year’s COP26 climate conference in Glasgow, Australia was the only major developed country that refused to set a stronger 2030 emissions target. It’s also the only country in the world to have repealed a carbon price.

What’s more, the Morrison government is promoting a “gas-fired” economic recovery from the COVID pandemic. It continues to promote coal and gas exports, and derides the EU’s carbon border levies as protectionism.

Safe to say, if a G7-led climate club formed in the near future, Australia would not be invited to join.

Australia should take Germany’s climate club proposal seriously, and move quickly to implement climate policies that bring us in line with G7 nations.

Otherwise, Australia faces the prospect of economic harm. This would not just come in the form of potential carbon border levies, but also a loss of both investment capital and the economic gains that come from being a first mover in clean industries.

Australia should move quickly to implement climate policies that bring us in line with G7 nations. Granville Harbour Wind Farm

Staying in the race

The climate club concept is not without its detractors. Some academics and climate negotiators caution that it could undermine multilateral cooperation in UN climate talks, while others warn such agreements can exacerbate equity issues between richer and poorer nations.

For its part, Germany has suggested climate finance could be provided to help developing countries become club members, and club members could make a phased policy transition.

If Australia wants to stay in the race, much more ambitious federal climate policy is urgently needed.

Read more: What drove Perth's record-smashing heatwave – and why it's a taste of things to come