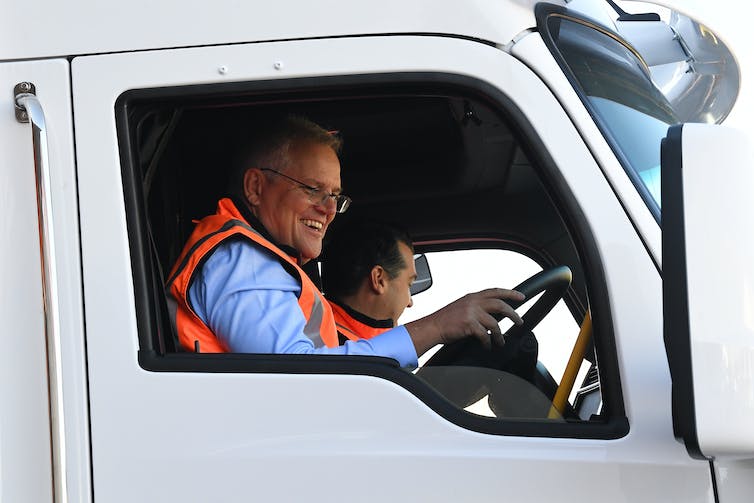 As he embarks on an election year, there is a question about whether Prime Minister Scott Morrison’s media communications strategy, which has served him well for a long time, is fit for the current political environment.

The strategy is predicated on the proposition that Morrison is the government’s prime political asset, to be protected as necessary and exploited where possible. Doubtless this is a legacy of his “miracle” win in 2019.

To this end, it has four central elements.

The first is to maximise his visibility when there is good news or an “announceable” to unveil. These appearances are tightly controlled and usually supported by some theatrical prop: an officer in uniform; Morrison himself in a hard hat or some other form of dress-up – a chef’s apron, a medical researcher’s lab coat, a high-vis vest while sitting in the cab of a big truck. The media get plenty of footage but little chance to ask questions.

The second is to minimise his visibility when there is bad news. Handling this is delegated to a cabinet minister or a government official such as the chief medical officer. Where possible, blame for the bad news is also shifted to someone else.

The third is to maximise his direct exposure to friendly media. These include Rupert Murdoch’s News Corp outlets, matey radio jocks such as Ray Hadley on Sydney’s 2GB, and conversational television programs like Channel Seven’s Sunrise.

The fourth is to minimise his direct exposure to critical media. These include the Nine newspapers – The Age, Sydney Morning Herald and Australian Financial Review – Guardian Australia and the ABC.

A key media strategy of the prime minister is to maximise visibility when there is good news or an ‘announceable’, often in high-vis or some other form of dress-up. AAP/James Ross

The foundation on which this strategy rests is plausibility: that enough voters will believe Morrison to be trustworthy and competent.

However, mere plausibility is an unstable surface to build on. In recent months, Morrison’s has been seriously eroded.

On the question of trustworthiness, French President Emmanuel Macron said Morrison had lied to him about the cancelled submarine contract, and this was followed immediately by a cascade of further allegations that Morrison was a liar, most notably by Malcolm Turnbull, who said he had a reputation for dishonesty.

On the question of competence, Morrison now finds himself jammed between his political need to consign COVID to the past, and the reality of the Omicron wave. It is not going well.

As cases exploded across the country over Christmas and New Year, he persisted with his push for eased restrictions. His line was faithfully delivered for him by The Australian newspaper. On successive days – December 30 and 31 – it ran page-one banner headlines such as: “PM’s plea: set the people free”.

For a few days he went quiet. Then, on January 3, he stuck his head above the parapet to tell viewers of Seven’s Sunrise program that the government would not be supplying free rapid antigen test kits to everyone because “we just can’t go round and make everything free”.

This prompted an avalanche of criticism, including from News Corp’s news.com.au. Commissioning editor Riah Matthews, who published a scathing opinion piece saying it showed how out of touch Morrison was with “hardworking everyday Australians”.

Two days later, Morrison sought to hose down this criticism by leaking a proposal, subsequently adopted by national cabinet, for disadvantaged groups in the community to be given free rapid antigen tests.

Murdoch’s big tabloids, the Daily Telegraph in Sydney and Herald Sun in Melbourne, described this as a “backflip”. But the trusty Australian found a way to put a positive spin on it, saying it was an attempt by Morrison to end debate over COVID testing, “which is a state and territory responsibility”.

It is early days, but if this unusually discordant chorus from News Corp were to continue between now and the election, one of the key elements in Morrison’s media communications strategy would be undermined. He would no longer be able to rely on this most powerful of media allies for unquestioning support.

He has not made life easier for himself by reportedly trying to put pressure on the senior political correspondents of the Nine newspapers.

According to a report in The Australian, Nine’s chief executive Mike Sneesby and head of publishing James Chessell met Morrison and the head of his media team last month. Morrison was reported to have complained the political columnists on The Age and The Sydney Morning Herald were “too tough” on him.

The Nine organisation said no concessions had been made, and this became obvious within a week, when columns by the Herald’s political editor Peter Hartcher and the chief political correspondent for the two papers, David Crowe, were notably tough on Morrison.

Plainly, no one had warned Morrison about the culture of robust editorial independence on those newspapers. Or, if they had, he was cross enough to disregard it.

Read more: It's still not too late to fix the rapid antigen testing debacle. Why the national cabinet decision is wrong and must be reversed

Australia also enters an election year in the aftermath of the media diversity inquiry, the report of which was delivered in early December.

The political relevance of this inquiry lies not in its recommendations, but in the fact it was generated by widespread public concern at the concentration of media ownership in Australia. About two-thirds of the metropolitan daily newspaper circulation is controlled by News Corp.

This concern was demonstrated by the fact the inquiry was established as a result of a petition to parliament by former Prime Minister Kevin Rudd, focused on the influence of News Corp. It attracted more than half a million signatures.

The report noted the inquiry received 5,068 submissions, one of the largest number ever received by a Senate inquiry. It said this indicated

the high degree of public interest in the health of Australia’s media sector, including the availability, diversity and reliability of news content.

Media ownership and diversity are obviously not front-of-mind issues for most of the electorate. But they are not negligible considerations either.

Morrison relies heavily on the support of News Corp, which has become a de facto propaganda arm of the government. Anything that unsettles that cosy arrangement would compromise his media strategy and make an already difficult set of circumstances even more awkward.

The more fundamental question is whether his plausibility remains a strong enough foundation for the strategy to rest on. If not, those four central elements will have to change.