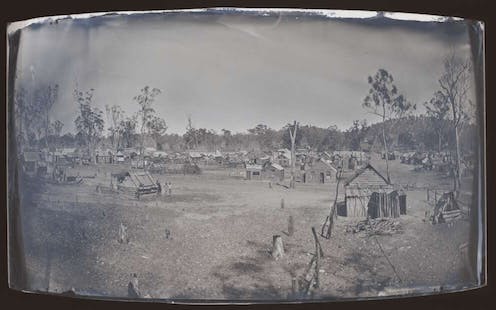 For many women in colonial Victoria, home was not a place of security and comfort. Instead, home – both on the goldfields and off – tethered women to lives that were unsafe and unpredictable.

The “private” nature of historic violence in the home presents unique challenges to historians. While newspaper reports of men’s violence towards their wives were commonplace, they presumably comprised only a small percentage of the actual domestic violence being perpetuated.

Often, only the most violent stories reached the press. In my research, I draw on the interwoven lives of the fictionalised account of Mrs Morland and the woman on whom I believe she was based, Isabella Murrell, to focus on the violent acts committed inside the homes on the goldfields. In this work, I hope to expose the realities of life inside the tent as part of a broader study of home and homemaking on the diggings.

In 1866 the Australasian newspaper printed a fictionalised story of a miner who boarded with a married couple, Mr and Mrs Morland.

The narrator found Mrs Morland to be a “perfect treasure of a wife”. Her home was a clean and neat slab hut, lined with hessian kept scrupulously whitewashed. The earthen floor was “pipeclayed” every week, sack mats were regularly boiled, and breakfast was on the table every morning by half-past-six.

“I don’t want to make out that she was an angel”, the miner noted. “I shouldn’t have liked her so well if she had been so very angelic.”

After the miner moved on to the next gold discovery, he continued to run into the couple, each time finding them more delapidated than the last. Their neat, clean home was no longer, now replaced by a “refreshment shanty”. Mrs Morland had become “a creature”. The miner could no longer bear to look at her.

Mr Morland was often brutal, repeatedly slamming and crushing Mrs Morland between the door and the wall of their slab hut.

Later, when Mrs Morland finally tried to leave her husband, he beat her to death with an iron hook attached to a windlass rope.

Read more: Hidden women of history: how mother of 8, Mary Anne Allen, made do on the goldfields amid gunshots, rain and sly grog

Such sensationalist articles often appeared in colonial newspapers, and were written to entertain: they were often more fancy than fact. But many of the details of this story are horrifically, frighteningly real.

While Mrs Morland is fiction, her brutal death appears to have been based on the murder of Isabella Murrell by her husband William Dixon Murrell.

Isabella Robinson (a house servant) married William Dixon Murrell (a chandler) in England in 1852. The couple sailed to Victoria where they had three sons, the last on the goldfields in Dunolly in 1857.

In July 1863, William viciously murdered his wife Isabella, beating her naked body for over an hour with three different weapons: a leather saddle strap and buckle, a piece of wood and a rope with an iron hook attached.

After William had beaten Isabella to death, he carried her inside their tent, dressed her in a clean shift and attempted to revive her with warm coffee and a hot flannel. He did not notice she was dead until morning.

When the police found her, Isabella’s lifeless body was cold but her stomach still warm from the flannel.

At the trial, William blamed his dead wife for his behaviour, saying Isabella was an unfaithful drunkard who needed punishing. William pleaded he had dearly loved his wife. William cried he was very sorry for what had occurred, he had no intention of killing Isabella. He was trying to punish her; she was about to repent. He had struck Isabella “in the heat of passion”.

When the defence in the colonial courtrooms argued murder was a “crime of passion”, the wife was often presented as unfaithful, immoral and unrespectable. She was put on trial for her conduct and habits as much as the husband for his acts of violence.

William was committed for Isabella’s murder and sentenced to death (later commuted by a sympathetic judge). After the verdict, William said he was concerned his actions would be perceived poorly. His intention, he said, was never to kill his wife – but to reform her.

The veneer of civilisation

The murder and trial were reported widely, and in graphic detail. Alcohol was blamed for William Dixon Murrell’s descent from a good and loving husband to wife-beating murderer. Isabella was blamed for failing at domesticity, morality and respectability.

After the discovery of gold in Victoria, there was a sharp jump in newspaper reports and articles connected to wife-beating. This coverage mirrored discussions occurring in Britain and the colony more broadly. Politicians, community leaders and newspapers alike expressed concern the scourge of “wife-beating” was a threat to civilisation itself.

The success of empire and the colonisation project was directly connected to a functioning happy and respectable home.

Women were held responsible for men’s behaviour in the newspapers and in the courts. For many women, then as now, the immediate and ongoing consequences of violence in the home were an inescapable part of everyday life.

Read more: The long history of gender violence in Australia, and why it matters today