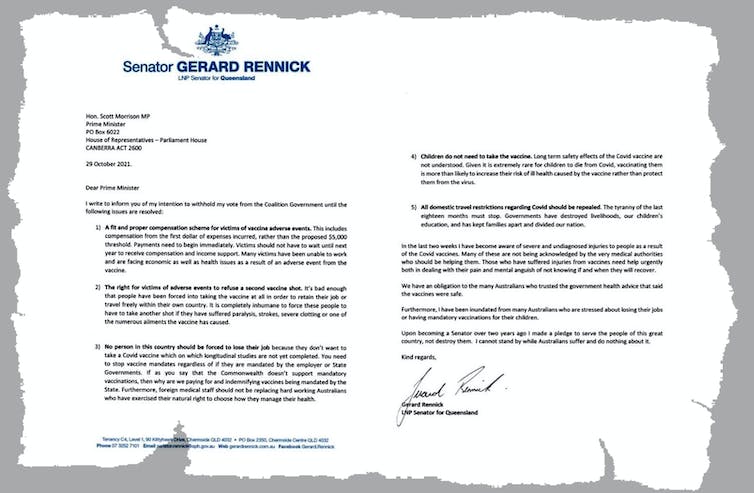 Right wing Queensland Liberal senator Gerard Rennick has told Scott Morrison he will withhold his vote from the Coalition until various issues relating to COVID are resolved.

Rennick says there should be a “fit and proper” compensation scheme for victims of “vaccine adverse events”, and the right upheld for people who have had an adverse event to refuse a second shot.

Also, no one should lose their job because they won’t be vaccinated, Rennick says in his letter.

The Senator says domestic travel restrictions relating to COVID should be scrapped. and says children do not need to take the vaccine.

The government has a scheme to cover the costs of injuries above A$5,000 resulting from “a proven adverse reaction to a COVID-19 vaccination”.

The program is funded by the Commonwealth to provide compensation for the small number of people who have significant adverse reactions, giving them an alternative to legal action.

Read more: Your unvaccinated friend is roughly 20 times more likely to give you COVID

Rennick wants the scheme enhanced including by providing compensation “from the first dollar of expenses incurred”.

“In the last two weeks I have become aware of severe and undiagnosed injuries to people as a result of the Covid vaccines. Many of these are not being acknowledged by the very medical authorities who should be helping them. Those who have suffered injuries from vaccines need help urgently,” he writes.

Gerard Rennick In the letter to Prime Minister Scott Morrison he says “you need to stop vaccine mandates regardless of if they are mandated by the employer or State Governments. "If as you say that the Commonwealth doesn’t support mandatory vaccinations, then why are we paying for and indemnifying vaccines being mandated by the State”. “I have been inundated from many Australians who are stressed about losing their jobs or having mandatory vaccinations for their children.” Read more: Australians will soon receive COVID booster vaccines. Why do we need them, and how effective are they? Facebook has put information alerts on many of the controversial senator’s postings about COVID and vaccines. Recently Rennick in the Coalition parties room reportedly threatened to withhold his vote on critical legislation unless the government challenged Queensland’s border restrictions. A spokesman for the PM said Morrison would continue to follow the health advice. “The prime minister will discuss the matter with senator Rennick when he returns to Australia,” the spokesman said. Authors: Michelle Grattan, Professorial Fellow, University of Canberra