This comes after a historically short 12-day campaign.

According to projections by public broadcaster NHK, the LDP will still keep a majority in the... 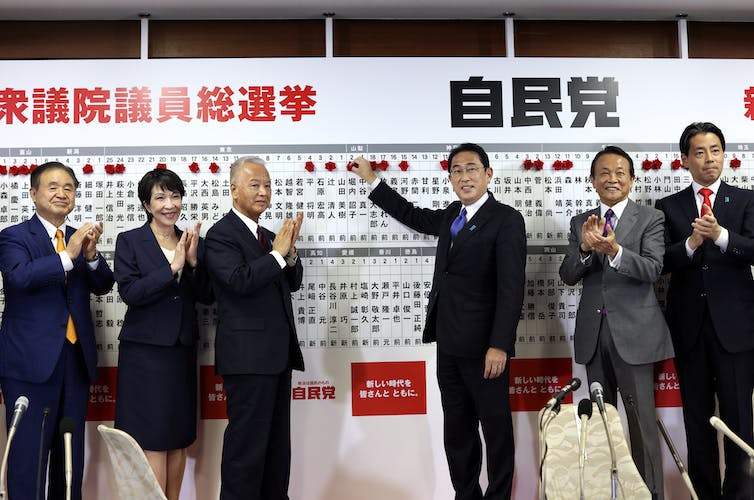 This comes after a historically short 12-day campaign.

According to projections by public broadcaster NHK, the LDP will still keep a majority in the 465-seat house of representatives (or Diet). It looks like losing 15 seats to 261, supported by 32 seats held by its coalition partner Komeito, which gained three seats.

The main opposition, the centrist Constitutional Democratic Party, lost 13 seats, to end up with 96. Other smaller opposition parties only shifted slightly, with the Japanese Communist Party dropping two to ten, and the centre-right Democratic Party for the People gaining three to reach 11. The biggest gains were made by the populist Japan Innovation Party (JIP), which boosted its numbers from 11 to 41 seats.

Kishida is new to the job, only winning the LDP leadership last month. He is gratified by the election result, stating he will “really listen to people” for “a bright future for Japan”.

Since gaining the leadership, he deliberately lowered expectations for the election, setting a goal for the LDP of securing a bare majority. With 261-plus seats, the coalition can retain control of Diet committees and keep its tight control of the parliamentary agenda.

The decline in the LDP’s vote reflects the electorate’s frustration over its erratic handling of the economy and coronavirus pandemic under former prime ministers Shinzo Abe and Yoshihide Suga, particularly the decision to go ahead with the Tokyo Olympics despite the spike in delta cases.

The progressive opposition parties tried to increase their chances with an agreement not to run against each other in more than 200 electorates. However, many disgruntled voters in Japan’s second-largest city of Osaka completely swung to the JIP, based in the central-west Kansai region, which promotes more neoliberal economic policies.

Kishida now has the challenge of delivering a “new capitalism” – reducing the income inequality that worsened under the previous nine years of “Abenomics”. The LDP will now prepare a draft supplementary budget with “tens of trillions of yen” to stimulate a post-pandemic recovery, which may include tax breaks for firms that raise wages, and increases to wages for public-sector workers

Prime Minister Fumio Kishida has been re-elected to the job he has only held since October 2021. Behrouz Mehri/EPA/AAP

Having only made a virtual appearance at the G20 Rome summit, Kishida will immediately set off for the COP26 summit in Glasgow.

Suga committed Japan to net zero by 2050, a policy Kishida has pledged to pursue by restarting Japan’s idled nuclear power plants. His cabinet’s plan, released before election campaign, has a target for carbon neutrality by 2050, and to cut emissions by 46% from 2013 levels by 2030, an improvement on the previous target of 26%.

Renewable energy is aimed to reach 36-38%, and fossil fuel-generated power 41% by 2030, leaving nuclear power at 20-22% of energy generation. This is likely to continue the gradual decline of coal and gas imports from Australia, potentially to be replaced by hydrogen.

During the election campaign, Kishida interrupted his campaigning to address North Korea’s latest illegal missile tests and attend virtual meetings of the ASEAN-Japan and East Asia summits. He again indirectly criticised China for its human rights abuses in Hong Kong and Xinjiang, pledged support for Taiwan, and reaffirmed Japan’s opposition to any change to the rules-based maritime order in the region.

Read more: Japan signals a 'sense of crisis' over Taiwan — this is why it is worried about China's military aims

Kishida is also set to continue the LDP’s policy of increased defence spending, ensuring Japan’s participation in the escalating regional arms race. Developing an overseas strike capacity, including hypersonic missiles, will further push the boundaries on constitutional limits to operations by the Japanese Self-Defence Forces. Japan may even eventually join the AUKUS security pact.

Various social issues confront Kishida’s returned government, particularly gender equality, where Japan is 120th in the rankings of the World Economic Forum. Fewer than 18% of candidates in the election were women, no better than 2017.

Kishida will also be confronted with a lack of progress on gender equality in Japan. Frank Robichon/EPA/AAP

The media frenzy over the delayed marriage of Japan’s Princess Mako last week highlighted how gender inequality even threatens the future viability of the imperial family. Kishida has so far been against changing the law to allow female succession, despite widespread public support for this reform.

Most Japanese similarly wish to see laws changed to allow women to keep their family names after marriage, and to allow same-sex marriage, but these are also resisted by LDP conservatives.

The loss of LDP seats puts Kishida on notice. If his approval ratings continue to fall below 50%, he remains vulnerable to pressure from discontented Diet members and rival LDP faction leaders.

There will be increasingly nervousness about further setbacks in an the election scheduled for the middle of next year, for half the seats in the upper house. If the LDP-Komeito lose its majority in the upper house, this could turn Kishida into a lame duck, and see him follow his predecessors Abe and Suga into an early departure.