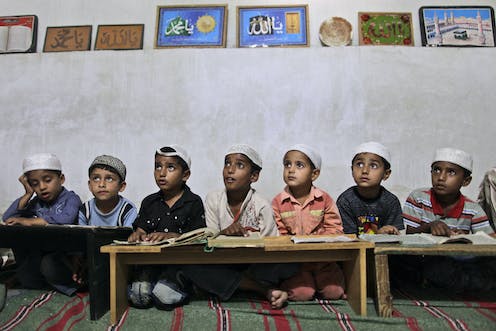 The swift reemergence of the Taliban in Afghanistan after a failed 20-year war means we need to look beyond military solutions to extremism. One area policymakers should focus on are madrassas — the religious schools that have existed in many Muslim countries for centuries.

Read more: Afghans' lives and livelihoods upended even more as US occupation ends

Our research in Pakistan shows the importance of these institutions not just in terms of education and religious fundamentalism, but welfare support, too.

This provides critical lessons for Afghanistan.

Madrassas and the Taliban connection

The exact number of madrassas in Afghanistan is not documented, but many Taliban have studied in them. There are an estimated 30,000-plus madrassas in Pakistan, where there is also a strong connection to the Taliban. For example, the Darul Uloom Haqqania madrassa in north west Pakistan has been described as the “university of jihad”.

There are tens of thousands of madrassas in Pakistan. Waqqar Hussnain/EPA/AAP

But reforms have only met with limited success. In part, this is because madrassas help meet the welfare needs of large, marginalised segments of the population.

Poverty in Afghanistan and Pakistan

Both Afghanistan and Pakistan have very high poverty levels, although the problems are more intense in Afghanistan. In 2016, more than half (51.7%) of the Afghan population and 39% of Pakistan’s population were considered poor due to the serious health, education and living standard deprivations they faced, using the poverty line of US$1.90 (A$2.60) per day.

More than 70% of Pakistan’s workforce are in informal jobs, such as street vending and more than 80% in Afghanistan are in similarly vulnerable employment.

Despite the high level of need in these countries, spending on social protection is only 2% of GDP, a figure less than 1/10th the average in high-income countries. In Australia social spending (including health) makes up close to 17% of GDP.

Between November 2019 and February 2020, the lead author travelled to Pakistan to conduct field research. Almost 600 families who sent children to madrassas were surveyed, with 90 of this group further interviewed in depth. An additional 40 madrassa heads were also interviewed.

There are 132 districts in Pakistan, but these can include several towns and villages, and the fringes can include significant rural populations. Out of these 132 districts, 14 were randomly selected for survey. About 35-45 families from each district were then randomly selected. The selected cities had high, middle and low poverty index scores and included Lahore, Faisalabad, Bajor (a conflict-affected tribal area bordering Afghanistan), Upper Dir (a conflict-affected area in the province of Khyber Pakhtunkhwa) and Multan.

The families were asked about their jobs, assets, the risks they faced, and the support they received from the government and family, friends, and religious institutions.

Living on 20 cents a day

The study found most families sending their children to madrassas were deeply impoverished. Remembering that the international poverty line is only US$1.90 per day, it is notable that of the 570 households studied, more than 400 were earning between 14 and 28 US cents per person per day (20 to 40 Australian cents per day).

Of the group, almost 12% were unemployed, while 60% had precarious jobs such as street vending, and 1.75% had no male adult — so child labour was their primary income source.

Of those surveyed, 15% suffered from infectious diseases such as tuberculosis, hepatitis and polio. Forced migration because of conflict (13%) and natural disasters (13%) were also common.

One of the participants described the lack of services:

My wife and I suffer from hepatitis […] A sizeable portion of my income is spent on treating this disease […] The water in my area is salty and undrinkable. Therefore, we must travel long distances to collect water. The hospital is hours drive from our village, and in emergency cases, we usually resort to traditional treatments.

Another talked about the ongoing risk of violence:

We are faced with a tribal conflict ongoing for forty years. Several members of our family have been killed in this conflict. We cannot move out of our homes during the day […].

In the absence of hospitals and essential services, madrassas step in to help fill these needs. They are a significant source of welfare for these families, in addition to the education they provide.

The withdrawal of international troops from Afghanistan has plunged the country into crisis. Bernat Armangue/AP/AAP

This can include cash assistance to families in times of need, assistance with health costs and helping with marriage and burial services.

I am a brick kiln worker, and we are a family of eight […] I have sent two of my kids to a madrassa in another city, where they are fed, provided shelter, and given a monthly stipend. So, it is a big relief for me.

A madrassa education, including education in Arabic, also makes children employable, potentially leading to jobs in other countries, or as Islamic teachers in schools, re-employment in the same madrassas or running their own madrassas.

I got a degree in Islamic education and got re-employed in the same madrassa. Although my income is less, I am happy that I have a job to feed my family.

Lessons for aid agencies and governments

Despite this growing interest, Pakistan and Afghanistan face severe economic and financial problems, assistance through formal government programs is only marginally helpful in meeting household needs.

As one participant explained:

I am a widow, and I get approximately 4500 PKR (approximately A$42) on a quarterly basis from [the government social welfare program]. I have to feed four kids, and the amount I receive is so little that I can use it only for buying basic consumption items [wheat flour, lentils, oil, rice, milk, and vegetables] of a week.

Our research suggests vulnerable and marginalised populations will continue to depend on madrassas for welfare support so long as governments do not have the adequate financial resources to fund effective social protection programmes.

In turn, a breeding ground for fundamentalism and extremism may continue to welcome new recruits. International donor agencies and countries such as Australia should direct their efforts to strengthen formal welfare strategies, so impoverished families are not forced to turn to madrassas for help.