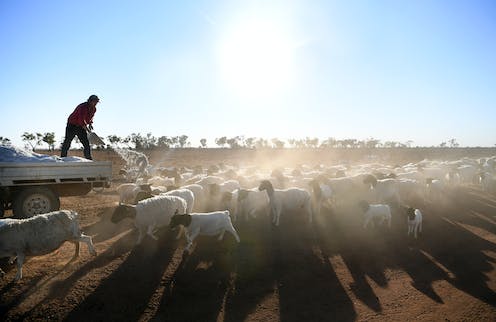 Political momentum is growing in Australia to cut greenhouse gas emissions to net-zero by 2050. On Friday, Treasurer Josh Frydenberg was the latest member of the federal government to throw his weight behind the goal, and over the weekend, Prime Minister Scott Morrison acknowledged “the world is transitioning to a new energy economy”.

But for Australia to achieve net-zero across the economy, emissions from agriculture must fall dramatically. Agriculture contributed about 15% to Australia’s greenhouse gas emissions in 2019 – most of it from cattle and sheep. If herd numbers recover from the recent drought, the sector’s emissions are projected to rise.

Cutting agriculture emissions will not be easy. The difficulties have reportedly triggered concern in the Nationals’ about the cost of the transition for farmers, including calls for agriculture to be carved out of any net-zero target.

But as our new Grattan Institute report today makes clear, agriculture must not be granted this exemption. Instead, the federal government should do more to encourage farmers to adopt low-emissions technologies and practices – some of which can be deployed now.

Read more: Nationals' push to carve farming from a net-zero target is misguided and dangerous

The Morrison government must do more to help farmers get on the path to net-zero. Alex Ellinghausen AAP/Fairfax Media pool

Many farmers want to be part of the climate solution – and must be – for three main reasons.

First, the agriculture sector is uniquely vulnerable to a changing climate. Already, changes in rainfall have cut profits across the sector by 23% compared to what could have been achieved in pre-2000 conditions. The effect is even worse for cropping farmers.

Second, parts of the sector are highly exposed to international markets – for example, about three-quarters of Australia’s red meat is exported.

There are fears Australian producers may face a border tax in some markets if they don’t cut emissions. The European Union, for instance, plans to introduce tariffs as early as 2023 on some products from countries without effective carbon pricing, though agriculture will not be included initially.

The agriculture sector itself is increasingly embracing the net-zero goal. The National Farmers Federation supports an economy-wide aspiration to be net-zero by 2050, with some conditions. The red meat and pork industries have gone further, committing to be carbon neutral by 2030 and 2025 respectively.

Australian agricultural activities emitted about 76 million tonnes of carbon dioxide-equivalent emissions in 2019. Of this, about 48 million tonnes were methane belched by cattle and sheep, and a further 11 million came from their excrement.

The sector’s non-animal emissions largely came from burning diesel, the use of fertiliser, and the breakdown of leftover plant material from cropping.

Unlike in, say, the electricity sector, it’s not possible to completely eliminate agricultural emissions, and deep emissions cuts look difficult in the near term. That’s because methane produced in the stomachs of cattle and sheep represents more than 60% of agricultural emissions; these cannot be captured, or eliminated through renewable energy technology.

Supplements added to stock feed - which reduce the amount of methane the animal produces - are the most promising options to reduce agricultural emissions. These supplements include red algae and the chemical 3-nitrooxypropanol, both of which may cut methane by up to 90% if used consistently at the right dose.

But it’s difficult to distribute these feed supplements to Australian grazing cattle and sheep every day. At any given time, only about 4% of Australia’s cattle are in feedlots where their diet can be easily controlled.

Diesel use can be reduced by electrifying farm machinery, but electric models are not yet widely available or affordable for all purposes.

These challenges slow the realistic rate at which the sector can cut emissions. Yet there are things that can be done today.

Many manure emissions can be avoided through smarter management. For example, on intensive livestock farms, manure is often stored in ponds where it releases methane. This methane can be captured and burnt, emitting the weaker greenhouse gas, carbon dioxide, instead.

And better targeted fertiliser use is a clear win-win – it would save farmers money and reduce emissions of nitrous oxide, a potent greenhouse gas.

Governments must walk and chew gum

An economy-wide carbon price would be the best way for Australia to reduce emissions in an economically efficient manner. But the political reality is that carbon pricing is out of reach, at least for now. So Australia should pursue sector-specific policies – including in agriculture.

Governments must walk and chew gum. That means introducing policies to support emissions-reducing actions that farmers can take today, while investing alongside the industry in potential high-impact solutions for the longer term.

Improving the long-term emissions outlook for the agriculture sector requires investment in high-impact research, development and deployment. Bringing down the cost of new technologies is possible with deployment at scale: all governments should consider what combination of subsidies, penalties and regulations will best drive this.

Agriculture must not become the missing piece in Australia’s net-zero puzzle. Without action today, the sector may become Australia’s largest source of emissions in coming decades. This would require hugely expensive carbon offsetting - paid for by taxpayers, consumers and farmers themselves.