We have discovered previously unappreciated differences between some male and female gibbons and siamang that could give us new clues about how social behaviour affected primate evolution.

Gibbons and siamang are small apes that live in parts of Southeast Asia, India and China. Most species are socially monogamous and live in pairs.

Like all animals, gibbons and siamang have evolved via natural and sexual selection in response to different environmental and social pressures. Looking at monkey and ape species that live today, including gibbons and siamang, can help us understand the forces that shaped them. This may allow us to discover more about the forces that also shaped their distant relatives, Homo sapiens, and their extinct ancestors.

In some animals, we see sex differences in physical traits associated with competition between males for mates or resources. In many monkey and ape species, large canine teeth in males are used as a visual signal of aggression. Similarly, the large bony ridge found at the top of some adult male gorilla skulls – known as the sagittal crest – and the fat hump that surrounds it is linked with a male’s ability to win fights and to attract females.

Until now, there was no sign that competition between males played a strong role in shaping male physical traits among gibbons and siamang. My new research, published in the International Journal of Primatology, shows three out of eight species show sex differences in their skulls and canine teeth.

These results suggest facial dimensions and canine size in the males of these three species (but not the other five) are important targets for sexual selection. These traits are associated with aggression among males and social signalling. Gibbon and siamang males show weak social bonds with one another, but understanding why enhanced physical traits evolved in the males of some species but not others has not yet been possible by studying their behaviour.

Gorillas and orangutans are subject to selection associated with competition among males, and these results suggest some gibbon and siamang species may face something similar. The males of these species develop size and shape differences in their facial skeletons, and have larger canine teeth compared to females.

Read more: Monkey minds: what we can learn from primate personality

Selective pressures on gibbon and siamang males are not thought to come from high-intensity combat among males for access to females, as is the case among some apes. It is more likely that their slightly larger body size and pronounced facial features enhance a male’s ability to ward off intruding males, or to prevent other males from killing their offspring.

My results suggest sex differences in the facial skeleton are linked with social communication in Eastern hoolock gibbons. 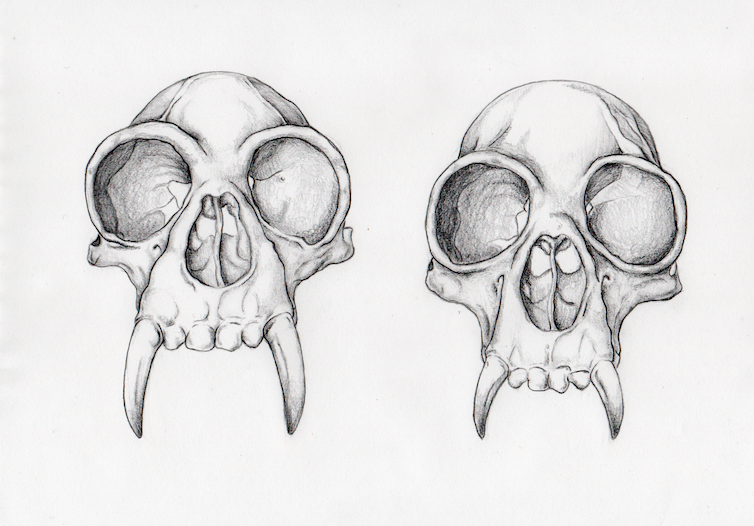 If specific regions of the skull are strongly associated with aspects of social behaviour, for example as a visual signal of aggression or dominance, this could give us insight into the social lives of early human ancestors and relatives, who are known through fossilised skeletal remains.

Read more: The origin of 'us': what we know so far about where we humans come from

Such future research will pave the way to better understand more about how extinct members of the human family tree socialised. This includes the australopithecines (our bipedal ape-like relatives who lived from around 4 million years ago onwards) and members of our own genus Homo, who are known from as early as 2.8 million years ago.

Such deeper insights into the social lives of our ancestors may allow a richer evolutionary understanding about the context in which our own species, Homo sapiens, arose.