Venus has returned to our evening skies and is looking lovely in the north-west after sunset. Tonight, July 13, it will pair up with the red planet Mars and just above the two planets will be the waxing crescent Moon.

Wherever you are in Australia, find a location that has a good view of the north-west...

Venus has returned to our evening skies and is looking lovely in the north-west after sunset. Tonight, July 13, it will pair up with the red planet Mars and just above the two planets will be the waxing crescent Moon.

Wherever you are in Australia, find a location that has a good view of the north-west horizon to see the conjunction. Venus will be visible during dusk, but you need to wait until the sky darkens to have a chance to see faint Mars.

Mars will appear just above and to the left of Venus. The best viewing opportunity will be from about 6:30pm , with the planets setting an hour later. 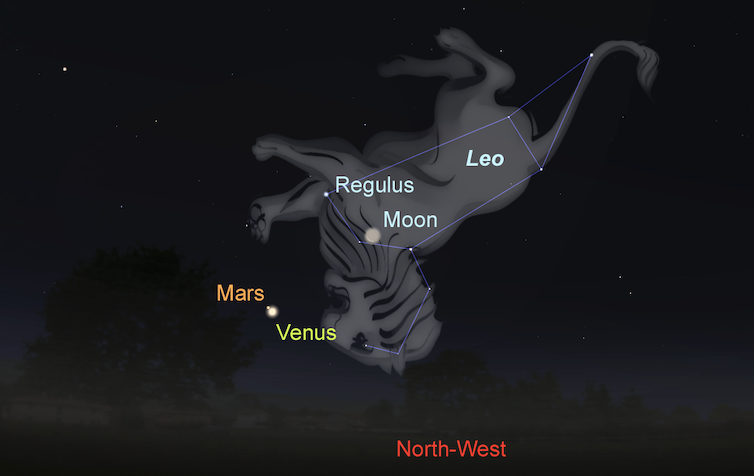 Look towards the north-west horizon after sunset on July 13 to see Venus, Mars and the crescent Moon. Museums Victoria/Stellarium

Venus is dazzling, so it is easy to see why it’s known as the “evening star”. Just look towards the north-west horizon after sunset and you can’t miss it.

Mars, on the other hand, is looking fairly faint. The red planet has been in the north-west sky for the past few months and while it was bright and red earlier in the year, it has been fading quite considerably as its orbit takes it away from Earth.

On Tuesday evening, the pair will appear so close together, they will fit within the field of view of a telescope or pair of binoculars. Yet in reality, they are millions of kilometres apart – Venus will be around 210 million km from Earth and Mars a more distant 370 million km.

Aboriginal Australians have witnessed close pairings of Venus and Mars for thousands of years and for the Euahlayi people of northern New South Wales it has particular significance.

This cosmic pairing represents the eyes of Baayami, the supreme creation ancestor. As one Euahlayi elder describes:

Read more: Aboriginal traditions describe the complex motions of planets, the 'wandering stars' of the sky

Euahlayi people would have seen Venus flash green, which is an interesting phenomenon that occurs as Venus is setting and its bright light is scattered by the Earth’s atmosphere. When it does this it also twinkles. Elders describe the planet as an old man who told a crude joke and is animatedly laughing to himself.

The event is also linked to ceremony. Euahlayi people follow part of a Songline mapped out in the stars to travel to a place near Quilpie, 430 km northwest of Goodooga in western Queensland. Bringing with them a green and blue opal, representing Venus, they meet the local Maranganji people, who provide a red stone signifying Mars.

Venus and Mars are Earth’s closest neighbours and yet they evolved so differently to our planet – one too hot and the other too cold.

Billions of years ago, it’s likely this trio of rocky planets all had oceans covering their surfaces. But on our two neighbours, those oceans have dried up.

Meet the neighbours: Venus and Mars. ESA, CC BY

For Venus, new modelling suggests that volcanic activity could have been the likely cause. Over a short period of time, so much carbon dioxide was pumped into the atmosphere that it could not be re-absorbed by the rocks. This triggered a runaway greenhouse effect and turned Venus into the hot, hellish world we know today.

Read more: Venus was once more Earth-like, but climate change made it uninhabitable

For Mars it’s a different story. Back when water was flowing on Mars, the planet was much warmer because its atmosphere was more substantial. However over billions of years, the solar wind made up of particles from the Sun has blown away much of that atmosphere. Mars doesn’t have a magnetic field like Earth to deflect the solar wind and the planet’s low gravity makes it easier for the gases to escape. 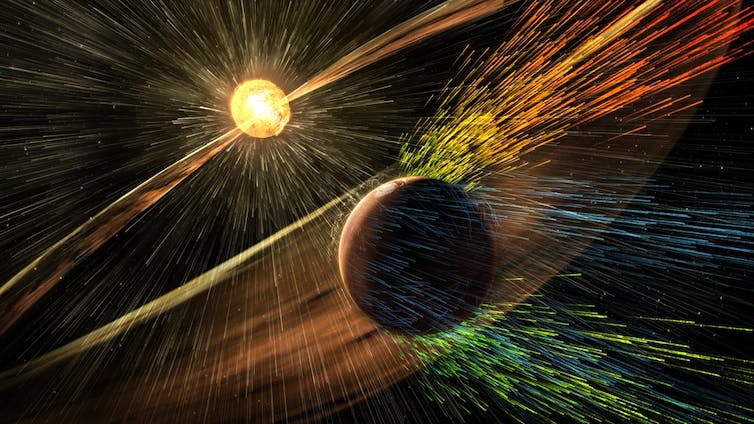 Artist’s rendition of a solar storm hitting Mars and stripping ions from the upper atmosphere. NASA/GSFC

The atmosphere is now so thin that liquid water can no longer exist on the Martian surface. Some water may have escaped along with the atmosphere, but the majority seems to be locked up in the Martian rocks and frozen underground.

As you observe the planets and in particular the Moon, you may notice an arrangement of stars that looks like an upside-down question mark. That’s the mane of Leo, the lion. 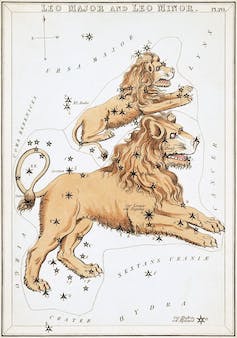 Leo, with Leo Minor above, as depicted in Urania’s Mirror, a set of constellation cards published in London c.1825. Wikipedia

From our vantage point in the southern hemisphere, Leo appears upside-down. In fact, all the constellations, and even the Moon, are viewed “upside-down”, because we live on a sphere.

The brightest star in the constellation of Leo is Regulus, often called the “little king”.

In Wardaman astronomy (from west of Katherine, Northern Territory), Regulus is called Moroborronggo. Uncle Yidumduma Bill Harney describes it as the creation dog. Right now, we are seeing Moroborronggo setting in the west, but back in April when the star is seen rising in the east at sunset, it brings special significance as it marks the start of the Wardaman calendar, when the monsoon rains begin to ease.