Your first time having sex and when you have your first child are memorable moments in life.

But what influences the timing of these? One research team set out to discover whether our genes play a role.

A study, published last week in Nature Human Behaviour, found hundreds of regions of our genetic code associated with how old we are when we first have sex and have our first child.

This research was always going to get lots of media attention. We’ve seen provocative headlines such as:

When you lose your virginity may be written in your GENES.

Media attention is partly placed on the role of genetics on the loss of virginity, which is a controversial social construct with a lot of cultural significance.

The researchers did find some significant and robust genetic associations.

But the contributions are relatively weak, and don’t override obvious social and cultural influences.

The real message is how old you are when you first have sex and have your first child is controlled by a little bit of nature and a lot of nurture.

From evidence provided by this study we certainly can’t say “my genes made me do it”.

The research project is robust and performed by competent scientists using modern technology and access to well curated patient tissue banks and databases.

This study looks at some of the genetics behind the age at which you first have sex, and separately, the genetics of when you have your first child (for both men and women).

The study is an impressive piece of research, where the authors undertook a very large “genome wide association study”. This is where researchers scan the entire genomes of many different people to uncover genetic variations associated with particular outcomes, like a disease or behaviour.

They looked at the age people first had sex in 387,338 people from the UK Biobank, which contains genetic information from hundreds of thousands of people in the United Kingdom. Then they looked at when people had their first child across 542,901 people from 36 individual previous studies they combined. These were all samples from people of European ethnicity.

They applied comprehensive data analysis techniques to ensure the associations they identified were unlikely be due to chance.

They also looked at the relationship of these genetic outcomes by sex or across socioeconomic and historical contexts. This is a well-established research approach that’s required to address complex behavioural traits. This type of study and approach has contributed to thousands of valuable research studies globally.

What did the researchers find?

Some truly interesting and plausible genes were associated with these two traits, along the lines of what you might intuitively expect to influence or underpin these complex behaviours. 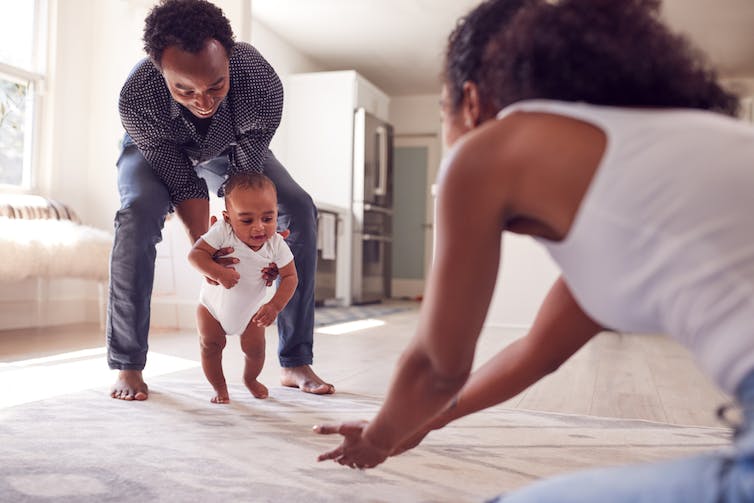 Researchers found 89 gene variants associated with how old people are when they have their first child. But the influence all these genes have on any one person is small. Shutterstock

Many of the genes associated with the age at which people first had sex were related to reproduction. Also, many were associated with behavioural and psychiatric traits, including those relating to risk seeking behaviour, sociability, anxiety, ADHD (attention deficit hyperactivity disorder), addiction and early smoking.

What are the shortcomings?

As with all genetic studies to analyse complex behavioural traits, the findings need to be taken with a grain of salt and put into context.

These are not the same types of gene variants or mutations we see in clinical genetics, linked to diseases such as inherited breast cancer, Huntington’s disease or cystic fibrosis.

While the study found interesting and robust associations, the amount of influence one (or all) of these gene variants have on any given individual is small.

And these genetic associations are not causal. Each has a minor effect, and none are enough by themselves to cause behavioural change.

There have been a number of gene association studies of this type taken out of context over the years, where association has been confused with causation, or where there has been extrapolation to non-European populations. Misinterpretation of these types of studies has caused confusion and offence.

This study may have uncovered some interesting biology. For example, the authors mention results relevant for improving teenage and late-life health, and mechanisms of infertility. But the results are mainly just interesting from an academic perspective and aren’t likely to impact diagnostic tests or new therapies. — Andrew Shelling

The review gives an accurate lay summary of this complex paper.

The study is based on analysis of enormous UK datasets that allow correlation between genome sequence and life traits, including age at first sexual contact and age at first birth. It identifies genes that may have an influence. Among a long list are many with known functions in reproduction or behaviour.

The reviewer was careful to state correlation does not necessarily mean causation.

The reviewer is correct in pointing out a relatively small amount of the variation in these traits can be attributed to genetic differences: about 22% for both traits. This is a proportion that nearly doubled between 1941 and 1965. This suggests, to me at least, relaxation of social pressures constraining sexual behaviour.

This collapses into a “polygenic score” of only about 6%, taking all factors into account. Indeed, as the reviewer notes, you can’t blame your genes.