The Israel-Palestine conflict has experienced its first violent spasm in the term of a new Israeli government. However, hostilities have since been contained, for the time being.

Provocative demonstrations this week in Arab East Jerusalem involving Israeli proto-nationalists chanting “death to Arabs” were met with a barrage of Hamas incendiary balloons that caused fires in Israeli farmland.

Israeli launched retaliatory air strikes against alleged Hamas positions in Gaza. This was pretty much the extent of the violence in the latest outbreak, a familiar tit-for-tat pattern.

The truth is that neither the new Naftali Bennett-led Coalition in Jerusalem, nor the Hamas leadership in Gaza, battered by days of airstrikes, wants to risk an escalation at this stage.

Both sides have been sizing each other up in these very early stages of the post-Netanyahu era in which Bennett is striving to stabilise a government whose combustible components range across the Israeli political spectrum.

The Bennett coalition is highly unstable and will need time to coalesce, if indeed that proves possible. The ousted Benjamin Netanyahu will be doing all he can as opposition leader to bring down the coalition led by his former allies.

Read more: The Labor Party has long struggled over a position on Israel and Palestine. Here's why

In a divided Israel, not unlike the biblical market of Seleucia, in which anything and everything was for sale, the notion of a loyal opposition is anathema.

This is the reality of Israeli politics on a knife edge in this new period. 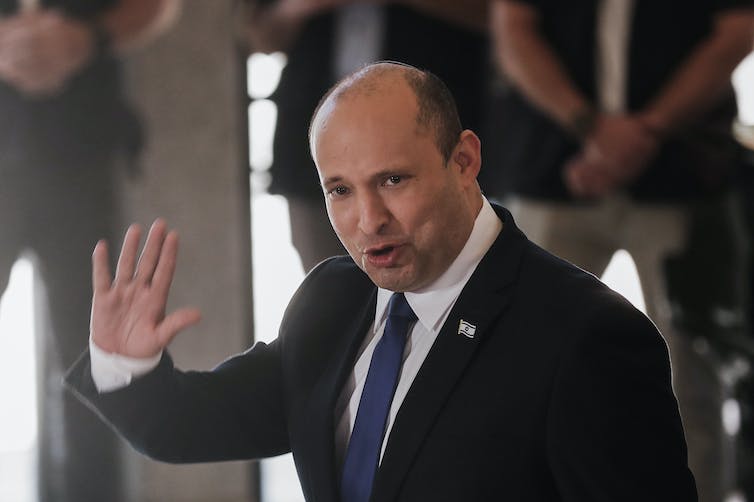 From the Palestinian perspective, its divided leadership, between Hamas militants in Gaza and the feeble Fatah mainstream in Ramallah, will be watching and waiting to see where the cards fall.

Both the Israelis and Palestinians will have their eyes on Washington, where the Biden administration represents a significant change from its predecessor led by Donald Trump, whose blatant partisanship encouraged Israel’s bad behaviour.

Initial indications are Biden will not be replicating the Obama administration’s focus on kick-starting an ephemeral Middle East peace process.

The administration’s early preoccupation will be with crisis management. Washington has much broader concerns these days, prime among them are managing China’s rise and combatting a revanchist Russia.

Insofar as Biden is focused on the Middle East, his priority is to resuscitate the Iran nuclear deal recklessly undone by his predecessor.

Read more: Joe Biden's approach to the Middle East will be very different from Trump's, especially on Iran

In all of this, Israel-Palestine and the endless machinations of its various players are a distraction.

The question, as always, is whether destructive forces on either side can be contained long enough for an easing of tensions and a relaxation of restrictions on Palestinians living under occupation.

In the present circumstance, there is no realistic chance of a resumption of a genuine Middle East peace push. For all intents and purposes, talk of a “two-state solution” resides in the glib assertions of politicians who know perfectly well it means little.

An essential question in all of this is whether Netanyahu’s departure from the Israeli leadership, if only temporarily, will provide breathing space for the various parties to step back from the brink.

There is little confidence between Israelis and the Palestinians, shredded by Netanyahu’s 15 years in office in two separate and destructive tranches. In the end, trust had evaporated, with faults on both sides.

Netanyahu’s words could not be trusted. His opposite number, Mahmoud Abbas’s utterances could not be taken seriously since he was barely in control of his own faction, let alone the broader Palestinian movement.

The Palestinian Authority’s failure to hold presidential elections since 2005 and for the Legislative Council since 2006, in the knowledge the Fatah mainstream would lose out to Islamist parties, has undermined Abbas’s legitimacy and that of his supporters.

Israel’s messy democratic process stands in contrast to the unwillingness of the Palestinian leadership in Ramallah to risk the judgment of its citizens. This is notwithstanding the difficulties of holding free and fair elections under occupation.

This brings us back to the Bennett-led Israeli government in the first week of its tenure. It hangs on to power by a thread in Israel’s 120-member Knesset. Securing a working parliamentary majority in Israel has become increasingly difficult over the years as political parties of left and right have fragmented.

Bennett, of the minority rightist Yamina party, is an unlikely mainstream Israeli leader, although Israel’s political centre has shifted to the right. He has made his name as an outspoken leader and supporter of the Israeli settlers’ movement. In some respects, such as his energetic support for annexation of Palestinian territory, he has been to the right of Netanyahu. He was once Netanyahu’s chief-of-staff.

Read more: Netanyahu leaves behind a complex legacy in Israel. His successor will need to deliver change — and fast

As leader of a hydra-headed government of eight parties, which includes for the first time in Israeli history an Arab Islamist bloc, it will be a Holy Land miracle if Bennett survives for long.

However, he brings several assets to the table. For a start, he is not Netanyahu, who had become a reviled figure across Israel’s political spectrum, leaving aside his die-hard supporters.

Bennett is a successful entrepreneur in his own right. He is showing signs of being a political pragmatist, after establishing his political career as an uncompromising supporter of Israel’s expansion into territories occupied in war.

He is something of an unknown quantity in his new leadership role in partnership with the centrist Yair Lapid of the Yesh Atid bloc.

Whether all this is even workable will become apparent fairly soon.

In the meantime, Palestinians will not be investing much hope in Bennett’s ability to ease pressure on their daily lives, let alone bring about steps towards an enduring peace.

The latest Gaza spasm represented a punctuation mark in a new political environment. It is not an end point.