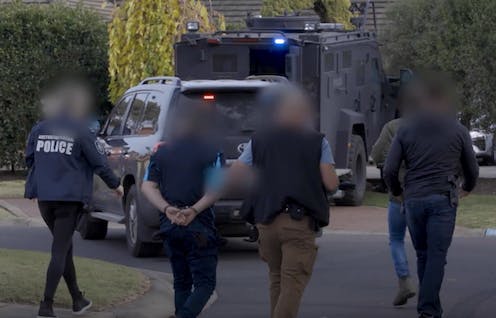 Organised crime has been front page news after the Australian Federal Police revealed its pivotal role in a multinational sting, three years in the making.

Along with drug cartels, the mafia and Asian crime syndicates, the AFP listed bikie gangs as one of the prime targets of Operation Ironside, with media reports also highlighting the role of bikies.

But are outlaw motorcycle gangs the serious organised crime threat they are made out to be?

According to the Australian Institute of Criminology an outlaw motorcycle gang is a motorcycle club used by members to engage in criminal activity. This activity can include:

violent crimes designed to protect the club and its reputation, its members and its territory, and more profit-motivated crimes that enhance the gang’s power or economic resources.

Outlaw motorcycle gangs have been the prime target in Australia’s fight against organised crime in recent years, with the Australian Criminal Intelligence Commission identifying them as a priority crime “theme” (along with cyber crime and illicit drugs). It launched a special operation against bikie gangs in 2020, describing them as a “significant threat”.

They are purely an organised crime network that is there to make money, generally off drug dealing, sometimes off intimidation and acts of violence and with no remorse for anyone, including innocent members of the community being hurt or killed in the process.

But the common assumption that all members of bikie gangs are criminals is incorrect.

What type of crime do they commit?

Much of the rationale for targeting bikie gangs is they predominately commit high-level or serious offences, such as murder, drug trafficking and extortion.

But our analysis of crime data in two Australian jurisdictions shows outlaw motorcycle gangs in both Queensland and the ACT contribute less than 1% to most organised crime offence categories. For example, in Queensland, between 2008 and 2014, bikie members represented 1% of murders and 0.1% of reported robberies. In the ACT between 2000 and 2019, gang members represented 0.4% of reported drug offences and 0.3% of unlawful weapons possessions.

How much crime are we talking about?

A 2020 study by the Australian Institute of Criminology showed 12.5% of bikie gang members had a history of organised crime offending. But this finding is problematic in that it relies on apprehension data. Not all apprehensions will result in a court appearance or caution, or a finding of guilt.

Importantly, bikie gang members are subjected to over-policing and targeting. The failed prosecution rate for outlaw gang members charges is much higher than the general population rate on data available both in the ACT and Queensland.

For example, the failed prosecution rate for bikie gang members in Queensland is 23%, compared to 6% for the general population. In the ACT, the rate is 27% compared to 4%.

Queensland government data shows outlaw motorcycle gang members were found guilty of just 0.17% of all reported offences in the state from 2008 to 2014. This accords with a separate 2016 taskforce in Queensland, which noted:

On any view of all the statistics, [outlaw motorcycle gangs] account for a very small proportion of the overall reported crime in Queensland – definitively, less than 1%.

In 2019, we conducted a review of the criminal activity of all current outlaw motorcycle gang members in the ACT. We found they were guilty of 0.06% of all reported ACT offences between 2000-2019.

The role of the gang structure in criminal enterprise

One could fairly have expected broader involvement of bikie gangs to been uncovered Operation Ironside’s three-year, landmark investigation. Yet of some 44 clubs in Australia, to date only the Comancheros and Lone Wolves received any specific mention.

One reason for this is that bikie gangs do not usually engage in organised crime as a collective unit. Rather, their threat arises from small numbers of members conspiring with other criminals for a common purpose.

A systemic review of relevant research by Australian Institute of Criminology in March 2021 found if bikie gang members are involved in crime – especially organised crime,

it appears that they tend to operate in small, loose networks that may include other [outlaw motorcycle gang] members but also individuals who are not members.

A 2018 study noted individuals within the group were more likely to interact with other criminal groups and freelance for common criminal purposes.

What are the big organised crime threats?

The Australian Criminal Intelligence Commission says around 70% of Australia’s serious and organised criminal threats have an offshore base or linkage.

Operation Ironside has shown just how attractive Australia is to overseas criminal groups other than just bikie gangs, with groups such as the mafia, Asian and Eastern European crime groups are now operating in Austalia’s criminal markets. Mexican drug cartels are also moving into Australia’s lucrative methamphetamine market.

Read more: The great bikie beat-up: why we shouldn't confuse crime lords with boofheads on bikes

So when it comes to organised crime, we need to look beyond simple generic responses, such as consorting laws — that theoretically stop bikies from interacting with each other — and bring a more nuanced approach to fighting organised crime.

Bikies make good headlines and are seen as the “usual suspects”, but we also need to look at the data to support our policy, legislative and investigative decisions.