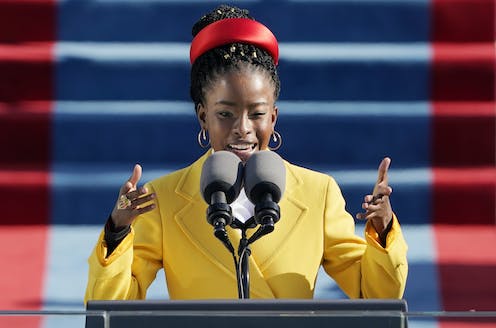 Poetry has made something of a comeback in popular culture, thanks to America’s Amanda Gorman, who read her performance poems at a presidential inauguration and this year’s Super Bowl. Gorman has been described as bringing poetry to the masses.

However, when it comes to the mainstream, poetry has long been hiding in plain sight. Gorman’s spoken-word performances, which have been compared to hip hop, drew attention to poetry in music lyrics. But poetry is also visible in movies and on TV.

These media representations are interesting because they show how poetry is popularly understood in connection with feelings. And that popular wisdom chimes with findings in cognitive neuroscience about how language and, by extension, poetry work.

Aside from films or TV series about poets, such as Dickinson or Paterson, poetry makes a cameo in some of our most iconic films, where it is said to represent or intensify a range of emotions. These include love (Before Sunrise), mad ambition (Citizen Kane), nostalgic patriotism (Skyfall), pride (Invictus), nihilism (Apocalypse Now) and trauma (The Piano).

Poetry, representative of emotion, is also frequently used to symbolise humanity. This is particularly apparent in films about clones.

Fiery the angels fell; deep thunder rolled around their shores; burning with the fires of Orc.

What emerges from poetry’s onscreen appearances, then, is a popular understanding of it as an expression of human feeling and evidence of genuine humanity.

This intuitive understanding of poetry resonates with findings in cognitive neuroscience. Leaving behind theories of the brain that suggest it operates like a computer and theories of language that focus on “mental grammar”, many scientists now acknowledge the body and emotion as the foundations of both cognition and speech.

Of particular interest is the role of mirror neurons. These brain cells fire when an action is observed or performed, and they tell us a lot about how we understand the actions of others. They suggest understanding comes from a mirroring or imitation that takes place in the brain but is acted out or felt in the body.

An example is the contagious effect of a smile. When we observe someone smiling, we mirror that action to understand it.

Something similar happens when understanding language. Words contagiously move us. As neuroscientist Christian Keysers explains in The Empathic Brain, if you hear or read the word “lick”, the part of your brain that moves your mouth is activated to aid understanding. The same happens if you hear or read the word “kick”. As a result, we feel the meaning of these words in our bodies.

What about producing words? Speech is fundamentally a motor activity, which evolved from gesture. We are moved to speak, and we literally move — our lips, our tongue, our lungs, our stomach muscles, and often even our hands — to express ourselves.

As infants, we begin learning language in interaction with a caregiver, imitating the shapes of their mouth, and waving our arms and legs in excitement and frustration at the repetitive noises they make, until eventually we are able to imitate their sounds. Those sounds are accompanied by feelings, related most strongly to a desire to communicate beyond the boundaries of ourselves.

Of course, language develops into a more abstract system for communication. It can often remain a struggle, however, to give expression to feelings that are powerfully felt in the body, such as loneliness or grief or trauma. As John Hannah’s character says in Four Weddings and a Funeral, when trying to articulate his feelings about his dead partner, “Unfortunately there I run out of words”.

Read more: On poetry and pain

This is where poetry comes in, making use of the rhymes and rhythms that have helped us find speech from infancy, calling attention to the auditory qualities of language to convey meaning through feeling.

If we can’t do it ourselves, we quote someone else’s words, instinctively and ritualistically associating poetry with the expression of emotion.

This link to emotion, as well as child-like speech, undoubtedly goes some way to explaining another popular idea about poetry: that it signals “madness”. Biopics of poets feed this stereotype by overwhelmingly choosing poets with mental illnesses as their subjects — for instance, Sylvia and Pandaemonium, portraits of Sylvia Plath and Samuel Taylor Coleridge respectively.

While poetry is regularly denounced for “not making sense”, our cognition and our language do not arise according to purely rational principles.

We are bodies wrought by feeling. Robin Williams’ character simplifies this truth in Dead Poets Society: