Last Friday afternoon, as parliament rose after a bruising sitting fortnight, the Morrison government released a “consultation copy” of the Foster review.

This is one of five reviews or inquiries Scott Morrison initiated in the wake of Brittany Higgins’ allegation she was sexually assaulted in a ministerial office and did not receive adequate support in the aftermath.

The day after Higgins told her distressing story in February, Stephanie Foster, deputy secretary for governance in the Prime Minister’s department, was tasked with looking at

whether we could do more to support vulnerable staff who have been part of a serious incident in our workplace.

Subsequently, Sex Discrimination Commissioner Kate Jenkins was asked to take a comprehensive look at the culture of parliamentary workplaces in a wide-ranging review, with terms of reference negotiated across the parliament. Jenkins will submit her report in November. Accordingly, Foster’s review focuses on “immediate, practical steps” that can be taken while Jenkins completes her work.

What does the review find?

The most significant gap is the absence of readily accessible, timely, independent, trauma-informed services and response mechanisms.

Among its ten recommendations, three critical areas are identified for immediate action:

A dedicated 24/7 support line for parliamentary staff has already been established. This was set up in March after an early recommendation from Foster.

But the review also recommends a “serious incident team” on top of the support line. This would provide wraparound support and resolution options to those impacted by a serious incident — including the subject of the complaint and their employing parliamentarian (if the subject is a staffer).

An obvious question is whether the recommendations, if implemented, would prevent the recurrence of an incident like the one Higgins describes.

The answer is a tentative maybe. 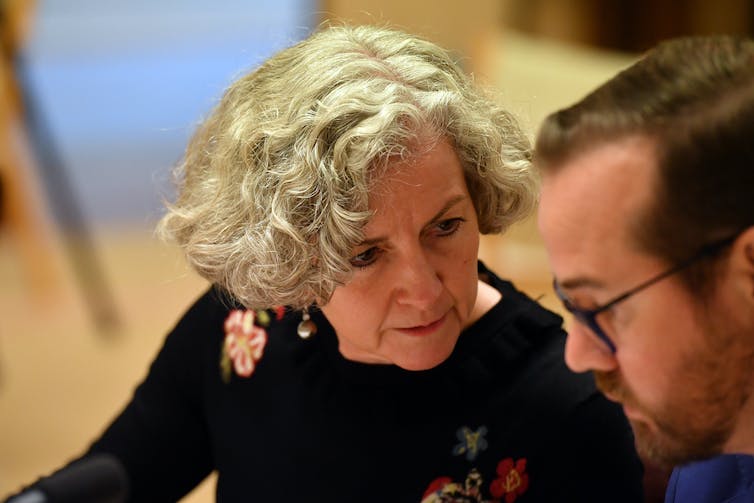 [It] places the impacted person at the centre of the response and trusts them to best understand their experience of harm, consistent with the terms of reference.

The review is also pragmatic. It acknowledges that parliament is a “workplace like no other”. The principle of parliamentary sovereignty means only parliamentarians can enforce consequences on fellow elected representatives.

Foster concedes that when it comes to making change, “implementation will be key”. It proposes a small implementation taskforce is established in the Department of the Prime Minister and Cabinet, with funding to mid-2022. It also notes that “meaningful change” will only come if parliamentary leaders fully commit to and act on the reforms.

Foster highlights the mood for change in the wake of Higgins’s story and other claims of harassment and bullying within parliament:

recent events have generated a genuine desire to make positive changes to the Commonwealth parliamentary workplace environment so it meets the expectations of Australians to observe the highest standards of professional conduct.

But, with the Jenkins review not due to report until November, and a federal election pending, it remains to be seen whether good intentions will translate to parliament becoming a safe and respectful workplace.

The Sex Discrimination Commissioner has been left to do most of the heavy-lifting — particularly around the problems inherent to the “complex and unusual” employment framework for staffers.

parliamentarians employ their own staff, with the approval of the Prime Minister under certain circumstances, having regard to the duties the parliamentarian performs as a Senator or as a Member of Parliament.

So, each of the 227 parliamentary offices operates independently, as its own self-contained workplace, with back-office support from the Finance Department.

Jenkins’ work must confront the ambiguous role ministerial staff play in Australia’s political system. This is something successive governments, including Scott Morrison’s have been unwilling to do — despite expert advice about the need to do so.

It is worth recalling Higgins’ case involved a senior and valued ministerial staff member. It is ironic to think in late 2019, Morrison rejected David Thodey’s recommendations to strengthen accountability and governance arrangements for ministerial staff, arguing

the government expects all ministerial staff to uphold the highest standards of integrity and it uses a range of mechanisms to ensure they are held to account for these standards.

He is not the first Prime Minister to fiercely guard executive power over ministerial staffing arrangements. But the inadequacies of current legislative arrangements and political practice suggest parliamentary workplaces might be safer if he was the last.

Read more: Why political staffers are vulnerable to sexual misconduct — and little is done to stop it