Since 2018, Australia has been seeking to become a top ten global defence exporter.

Its main exports are products and components that fit into broader global supply chains for weapons and weapons systems. For example, the government boasts there isn’t a single F-35 fighter jet production operation that doesn’t feature Australian-made...

Since 2018, Australia has been seeking to become a top ten global defence exporter.

Its main exports are products and components that fit into broader global supply chains for weapons and weapons systems. For example, the government boasts there isn’t a single F-35 fighter jet production operation that doesn’t feature Australian-made components.

The government sees further export potential for products and components to be used in armoured vehicles, advanced radar systems, and patrol boats, as well.

While Australia hasn’t made much headway on its export ranking, it has enjoyed some impressive sales success. In the 2017-18 financial year, the estimated value of approved export permits was A$1.5 billion. By 2019-20, it had grown to nearly $5.5 billion.

Australia’s export goals are connected to a broader effort to resuscitate domestic manufacturing.

Considerable government funding is involved in this effort, including $1 billion recently allocated to the Sovereign Guided Weapons Enterprise for building missiles.

Where do Australian arms go?

Australia doesn’t provide data on which countries it exports arms to. It only maps the regions, and unhelpfully, it lumps the Middle East and Asia together.

We do know successive defence ministers have courted markets in the UAE and Saudi Arabia.

Heavily redacted documents obtained by the Guardian under a Freedom of Information request also indicate that in 2018-19, Australia issued 45 arms export permits to the UAE and 23 to Saudi Arabia.

Another 14 permits were approved for the countries from 2019-20.

These developments are significant, not least because the UAE and Saudis have both been embroiled in the Yemeni civil war for years, at times conducting their own indiscriminate air strikes.

The UN secretary-general anticipates 16 million Yemenis will go hungry this year because of the conflict, while 50,000 Yemenis are already starving to death. 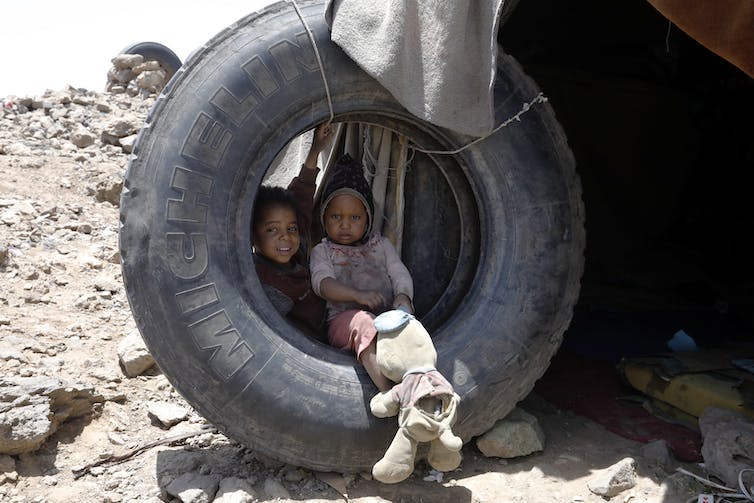 An estimated 80% of Yemen’s 29 million people are in need of humanitarian assistance due to the country’s long-running civil war. YAHYA ARHAB/EPA

Earlier this year, the Biden administration announced a freeze on “offensive” arms sales to Saudi Arabia and the UAE, citing the toll on civilians in the Yemeni war. Italy followed suit. Germany, too, halted weapons exports to the Saudis after the murder of journalist Jamal Khashoggi in 2018.

Advocacy groups in Australia have attempted to seize on this glimmer of momentum by calling for Australia to do the same.

When weapons end up in the wrong hands

In keeping with Australia’s national interests and international obligations, Defence facilitates the responsible export of military and dual-use goods and technologies from Australia.

Such claims are hardly new. If anything, they’re part of a long-standing Western tradition.

In the 1960s, the UN Security Council debated the merits of an arms embargo on South Africa. At the time, the French and British maintained their weapons sales were for “defensive purposes” and not “internal use”. South Africa built a terrifying internal security apparatus, making a mockery of the distinction.

The historical record shows that arms exports often show up precisely where they shouldn’t, causing untold civilian suffering. At times, they are even wielded against the immediate interests of the countries in which they were produced.

Here, the British experience is illustrative (although we just as easily tell this story about any purported liberal democracy in the arms export business).

When Tony Blair’s Labour government came to office in 1997, it promised an “ethical” foreign policy. As part of this, Labour would never allow the sale of arms to regimes that might use them for internal repression. Or so they said.

The previous government had approved export licenses for the sale of Hawk jets to Indonesia’s Suharto regime. While Labour could have cancelled these licences, it didn’t do so until it was too late. A series of unedifying spectacles followed. 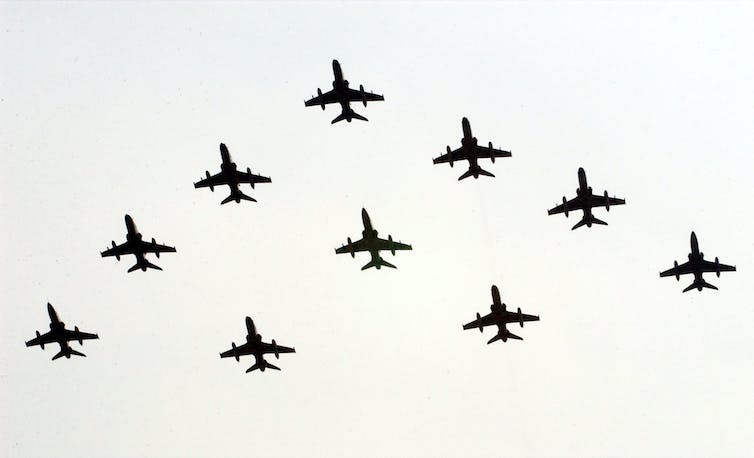 In 1999, Britain confirmed Indonesia had flown Hawk jets over Timor-Leste to intimidate local residents before the region’s independence referendum. Hawk jets were then used in 2003 to bomb Aceh province during a particularly brutal internal military campaign. British Scorpion tanks were also used.

These were by no means isolated incidents. In 2009, Britain conceded it was possible its weapons had been used in the Sri Lankan civil war in a manner contravening their export licences.

Like Australia, Britain is currently exporting weapons to Saudi Arabia, though a court challenge is being brought to try to stop it. From 2013-17, it was the country’s second-biggest supplier, after the US.

While Britain recently announced it will halve its aid budget to Yemen, it will not stop supplying the Saudis with arms.

Arming foreign governments does not just pose an immediate risk to civilians. In a phenomenon known as “blowback”, it can undermine the interests of exporters.

In 2004, for example, the European Union lifted arms sanctions on Libya. And from 2005–09, EU member states cemented arms deals with the oil giant.

Muammar Gaddafi’s regime stored its new purchases in warehouses. Then, in 2011, Libya erupted into civil war and NATO enacted a “no-fly zone”. Many of the warehouses were looted and the weapons spilled into the hands of both government and rebel forces. This effectively turbo-charged a conflict that NATO was responsible for controlling.

A 2013 UN report said looted weapons had been smuggled to as many as 12 other countries in the region. They’ve fallen into the hands of foreign governments, separatists, warlords, and Islamic extremists. This is how arms deals can come back to bite exporters.

The arms industry has an array of potential drawbacks. There are questions about the economic efficiency of investing in defence at the expense of other sectors, and arms procurement is highly susceptible to corruption.

Even if our intentions are good and we behave transparently, we still cannot predict the future. The British Parliamentary Committee on Export Controls articulated this problem over a decade ago when discussing the Sri Lankan war:

The issue of Sri Lanka illustrates the difficulties faced by the government, and by those who, like us, scrutinise the licensing decisions made by government, in assessing how exports of arms might be used by the destination country at a future date, particularly if [the] political situation in the country at the time of the exports appears stable.

That should give us pause for thought.