Read more: Getting people more active is key to better health: here are 8 areas for investment

Research shows 30km/h speed limits on local residential streets could reduce the Australian road death toll by 13%. The economic benefit would be about A$3.5 billion every year.

Learning from other countries, it will be important to run public education campaigns to inform communities and opinion leaders. Another key to success is finding a strong political champion of lower speeds in residential streets. 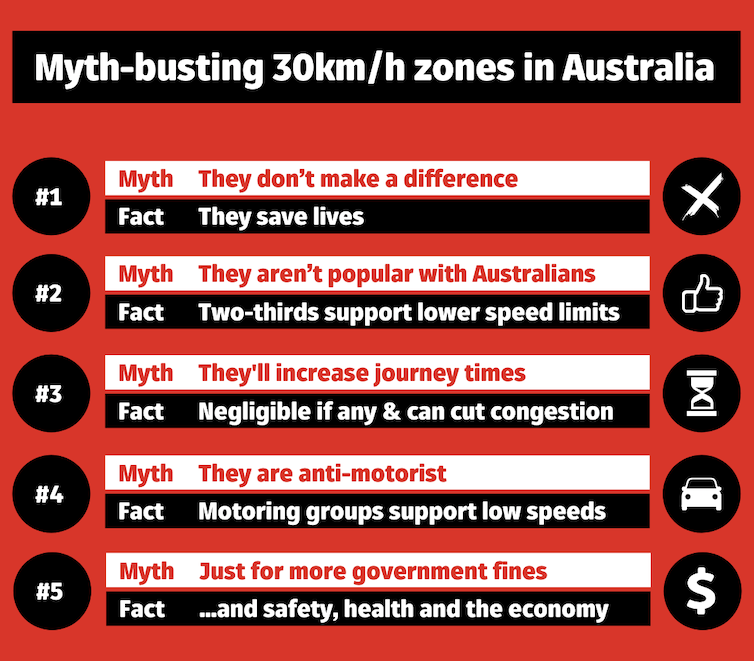 Matthew Mclaughlin, Author provided Myth #1: 30km/h limits don’t make a difference Road trauma is the number one cause of death in school-aged children. More than 1,100 Australians die on our roads each year. 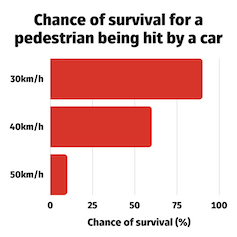 Data source: NSW Transport Metropolitan Roads (2019), Author provided The evidence is very clear: the chance of a pedestrian surviving when hit by a car skyrockets when the car’s speed is reduced. The chance of survival jumps from just 10% at 50km/h to 90% at 30km/h. Speed is the most common contributor to road trauma – more common than alcohol, drugs and fatigue. To reduce serious injury risk, 40km/h speed limits aren’t low enough. The chance of survival when hit by a car improves from 60% at 40km/h to 90% at 30km/h. Reducing speed limits to 30km/h in urban areas such as high pedestrian zones, school zones and local traffic areas is urgently needed to reduce deaths and severe injuries. 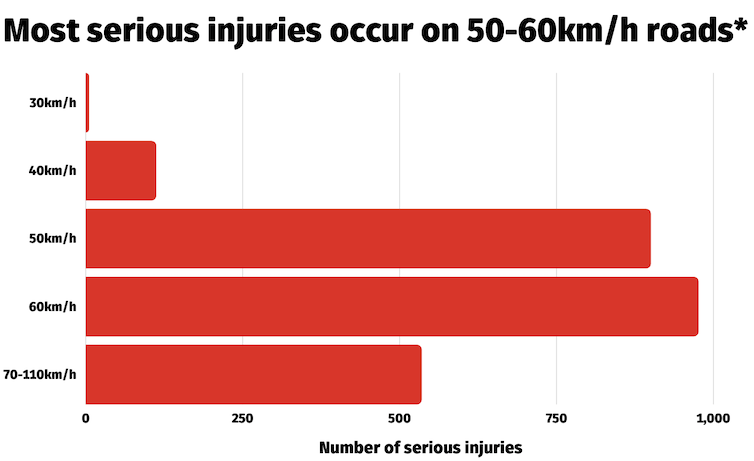 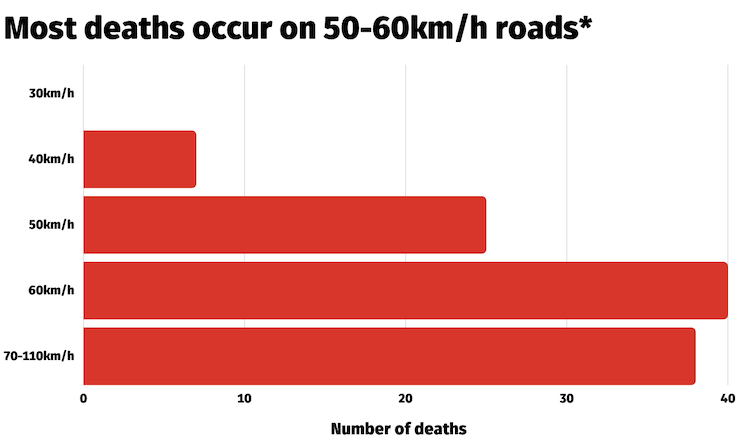 Numbers of deaths on New South Wales roads with different speed limits. * Data source: NSW Transport Metropolitan Roads (2019), Author provided Read more: Delivery rider deaths highlight need to make streets safer for everyone Myth #2: 30km/h limits aren’t popular How supportive would you be of reducing speed limits in neighbourhood streets to help create safer and more liveable streets for people? Well, according to a recent nationally representative poll, about two-thirds of Australians say they want lower speed limits on local streets. The introduction of 30km/h speed limits around the world shows the popularity of these limits grows rapidly after they take effect and local residents begin to appreciate the multitude of benefits from safer streets. Read more: London is proposing 20mph speed limits – here's the evidence on their effect on city life Myth #3: 30km/h limits increase journey times In urban areas, journey times are affected by more than the speed limit. Key factors include traffic congestion and time spent waiting at traffic signals. One study that considered a reasonably typical 26-minute journey to work calculated the difference between a 50km/h and 30km/h speed limit is less than a minute. Safer and more liveable streets can decrease our reliance on the private car. By shifting private car trips to active and sustainable forms of transport, such as cycling and walking, we can reduce congestion and improve population and environmental health. Research from Transport for London has indicated that 20mph (32km/h) zones have no net negative effect on emissions due to smoother driving and less braking. Read more: Climate explained: does your driving speed make any difference to your car's emissions? Myth #4: 30km/h limits are anti-motorist Reduced speed limits are not anti-motorist and are not about banning cars or the ability to drive. A 30km/h limit is a win-win-win for street users, businesses and motorists – and major motoring groups agree. Lower speed limits can lead to fewer car crashes, in turn reducing insurance costs and time delayed in traffic by those crashes. Main road speed limits will remain faster. However, residential streets, shopping streets and streets close to public transport will be slower, to create a more economically vibrant and safer city. That’s because children, older people and people living with disabilities feel safer when going to local schools, shops, services and parks. Myth #5: 30km/h limits are about revenue-raising Speed limits are a low-cost tool in the governments’ toolbox against road deaths. Of course, not everyone obeys speed limits – two-thirds of Australians admit to speeding. Speed enforcement and street design changes may be needed in some cases to reduce driver speed and improve conditions for all street users. Read more: Cycling and walking can help drive Australia's recovery – but not with less than 2% of transport budgets Enforcement works and ensures credibility, because no single solution will work alone. For best results, state and territory governments will combine multiple tools to reduce speed, such as speed limits, public education, driver training, speed enforcement and street design. 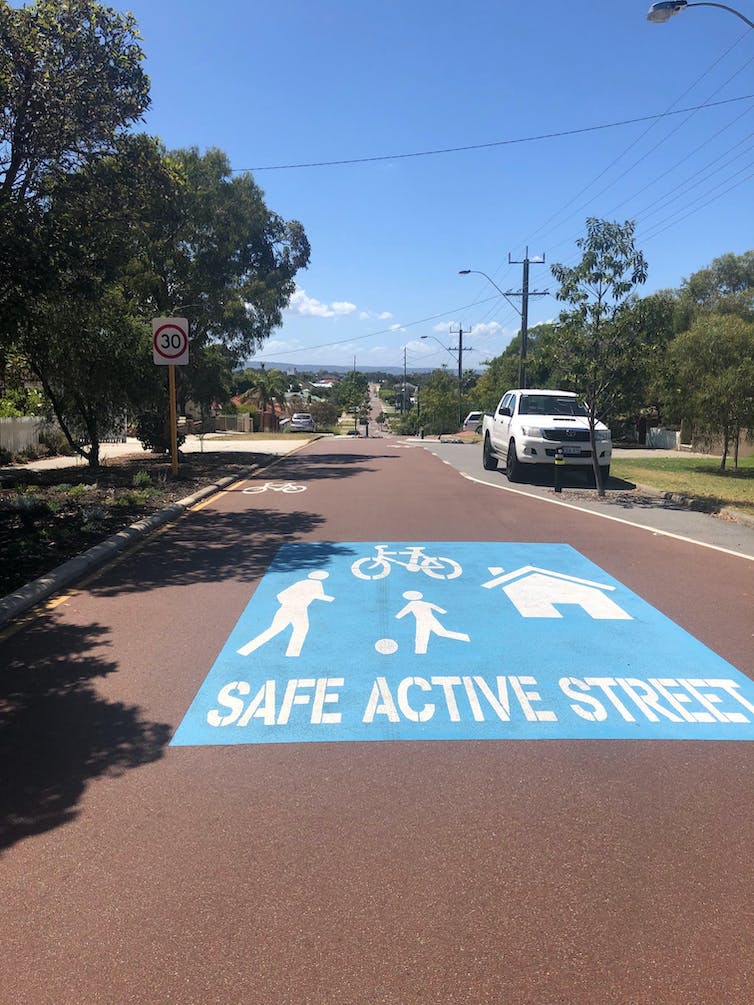 A Safe Active Street in Perth, Western Australia, combines multiple design features to reduce traffic speed and increase its amenity. Author provided Learn more Not convinced? More myths to bust? Check out the Australian campaign 30please.org and the global United Nations Road Safety Week campaign #Love30 happening this week. Introducing 30km/h limits is one of a suite of measures available to governments to bring about six compelling co-benefits to society: road safety, physical activity, air quality, liveability, equity and economic benefits. All Australian states and territories should urgently introduce 30km/h speed limits to create streets that are safe, accessible and enjoyable for all.