The latest IMF and World Bank reports show a global economic boom gathering steam. This is thanks to US$16 trillion in fiscal stimulus packages spent mostly across the world’s rich nations since the pandemic began.

The latest IMF and World Bank reports show a global economic boom gathering steam. This is thanks to US$16 trillion in fiscal stimulus packages spent mostly across the world’s rich nations since the pandemic began.

After the reversal of 2020, the global economy is now projected to grow by 6% in 2021, powered by strong growth in the US and China, which are forecast to grow by 6% and 8%, respectively.

Australians are not missing out, thanks to A$311 billion in public spending. The federal budget’s GDP growth forecast is 4.25% in 2021. Unemployment is forecast to fall to below 5% by mid-2023.

Before we get ahead of ourselves, however, we should consider the risks the pandemic continues to pose, not only to our recovery but the global boom the world’s rich nations have generated.

As a rich nation surrounded by developing countries, Australia can see these risks around its region, not only in India, but also Southeast Asia and the Pacific.

The first of these risks is that all our forecasts and projections assume the progress of successful vaccination programs, not only in Australia but around the world. Yet, the virus is potentially adapting more quickly than developing countries are able to vaccinate their populations.

Read more: 3 ways to vaccinate the world and make sure everyone benefits, rich and poor

The B.1.617 virus variant has become the dominant strain in India and spread to some 40 countries, including many in Southeast Asia.

Indonesia is particularly vulnerable. The vaccine rollout here has been sluggish, with just under 14 million people having received their first dose so far. The government has set an ambitious target of vaccinating 181 million people by next March, but it will struggle to reach this target. 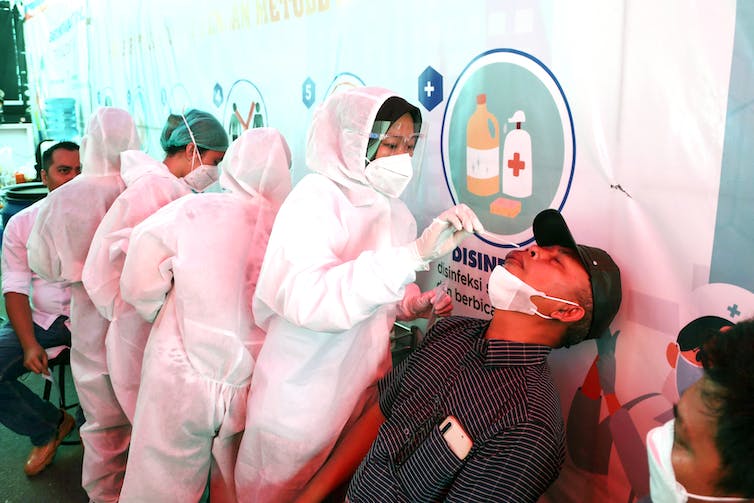 Indonesia’s vaccine rollout has been slow and disorganised, falling well short of its targets. DEDI SINUHAJI/EPA

Although the government prohibited travel during the recent Eid holiday, data suggests at least 1.5 million left homes before the ban, causing one epidemiologist to warn of a COVID “timebomb” in the country.

The government is already warning the appearance of the B.1.617 variant (and others) could cause the country to miss its growth target of between 4.5% and 5.3% this year, if the poor are unable to work due to new mobility restrictions.

The second risk to a post-pandemic global recovery is many developing nations are simply not benefiting from the start of the economic rebound.

COVID-19 has reduced per capita GDP by as much as one-fifth in these countries.

Last year, 100 million people — mostly in South Asia — were on the brink of extreme poverty. This could rise to as many as 150 million people this year. As a result, millions of children could drop out of school this year around the world. 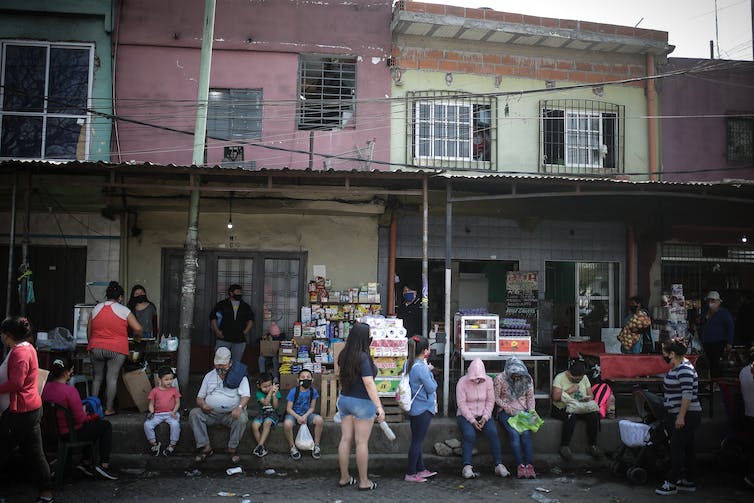 Fiji’s GDP contracted by a massive 19%, while in typhoon-affected Vanuatu, the economy shrank by 10%.

The effects on human development outcomes are immediately obvious. In PNG, 52% of families surveyed by the World Bank in 2020 indicated they were sending fewer children to school because of reduced incomes.

More broadly, across East Asia and the Pacific, students are expected to lose 0.8 Learning-Adjusted Years of Schooling (LAYS) — a measure that combines quantity and quality of schooling — between January 2020 and December 2021. This is almost half their school time over two years. 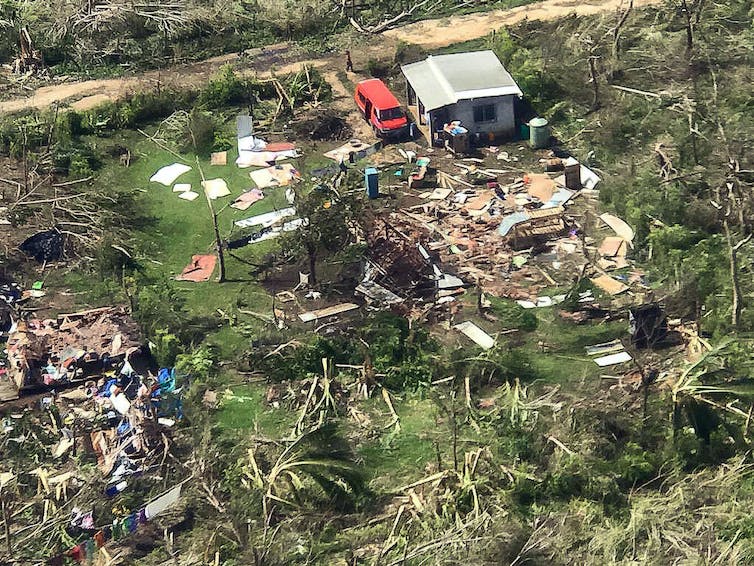 Half of Vanuatu’s population was made homeless from last year’s cyclone. Rebuilding has been slow. Luke Ebbs/Save the Children

Unlike Australia, many developing countries cannot free up large amounts of public money to invest in stimulating their economies. For them to join in the global recovery, they will need assistance.

Australia’s response is helping to some extent. Australia invested an extra A$479.7 million in international development spending in 2020–21 above its notional baseline allocation of $4 billion per annum.

Compared to other wealthy nations, however, Australia is still not giving much. Australia’s investment in Official Development Assistance (ODA) as a proportion of gross national income is 0.21% in 2021–22, much lower than the OECD average of 0.32%.

Given the scale of need and the pace of development in our region, Australia will very likely offer more as the financial year progresses.

But Australia also needs to do much more to mobilise other forms of funding to assist its neighbours’ economic recoveries.

One thing Canberra is doing right is investing some of its ODA in social protection schemes around the region, including an A$18 million Partnerships for Social Protection package for the Pacific that will scale up assistance to vulnerable households.

Australia has also issued a concessional loan to Indonesia, which it stipulates includes money for strengthening Indonesia’s health and social protection systems.

On top of this investment, Australia should use its access to global forums to advocate for more assistance to developing countries, especially in Asia and the Pacific.

Read more: India is facing a terrible crisis. How can Australia respond ethically?

One such forum is the G7+, where Australia says it wants to promote prosperity and security in the Indo-Pacific.

Another is the coming G20 summit in Italy in October, where Australia will have an opportunity to advocate for debt relief and restructuring for developing countries. This will allow them to free up cash for stimulus schemes like JobKeeper and JobSeeker, which protected many of us in Australia over the past year.

Australia is already meeting with the United States’ new aid administrator, Samantha Power, to discuss more cooperation on this front, including through the informal Quad alliance (which also includes Japan and India).

Australia should also continue to advocate to multilateral banks and funding agencies to invest real cash in new and additional stimulus packages and social protection systems around the region.

These systems could fund universal child benefits to keep children schooled and properly fed, protecting the advances our neighbours have made over the past 40 years of economic development.

Key to our own security and prosperity is our neighbours’ resilience to shocks like the COVID-19 pandemic and economic downturn.

Australia will need to allocate more money from its own coffers — and encourage more giving from the rest of the developed world — to stimulate our neighbours’ economies. Only then will we see a global economic recovery where everyone benefits — not just the wealthy.