Dame Nellie Melba, who appears on our $100 note, was born Helen Porter Mitchell in the Melbourne suburb of Richmond on May 19, 1861.

An operatic soprano with a voice described as sparklingly clear, her career would take her across the world, from Russia to America, but she always returned home.

This extraordinary Australian was arguably our first celebrity. While her singing is famed, she was a complex woman who shaped her own career, far more interesting than her culinary namesakes — Melba Toast and Peach Melba — might suggest.

On her 160th birthday, here are five things you may not know about her.

1. She avidly pursued the perfect portrait 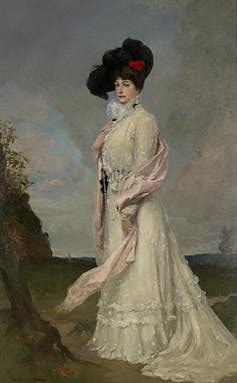 Melba was aware of the relationship between image and celebrity, and pursued the “perfect” portrait for years.

The most well known painting of Melba today is by Rupert Bunny, exhibited at the Royal Academy in 1902.

But biographer Ann Blainey reports Melba told her friends no one — save Bunny himself — liked the portrait when it was completed.

One of the most striking photographs of Melba was taken by Harold Cazneaux in 1922.

Looking at this image very closely, there appears to be the 19th century equivalent of photoshopping. Melba’s jawline has been subtly reshaped: a little visual nip and tuck. 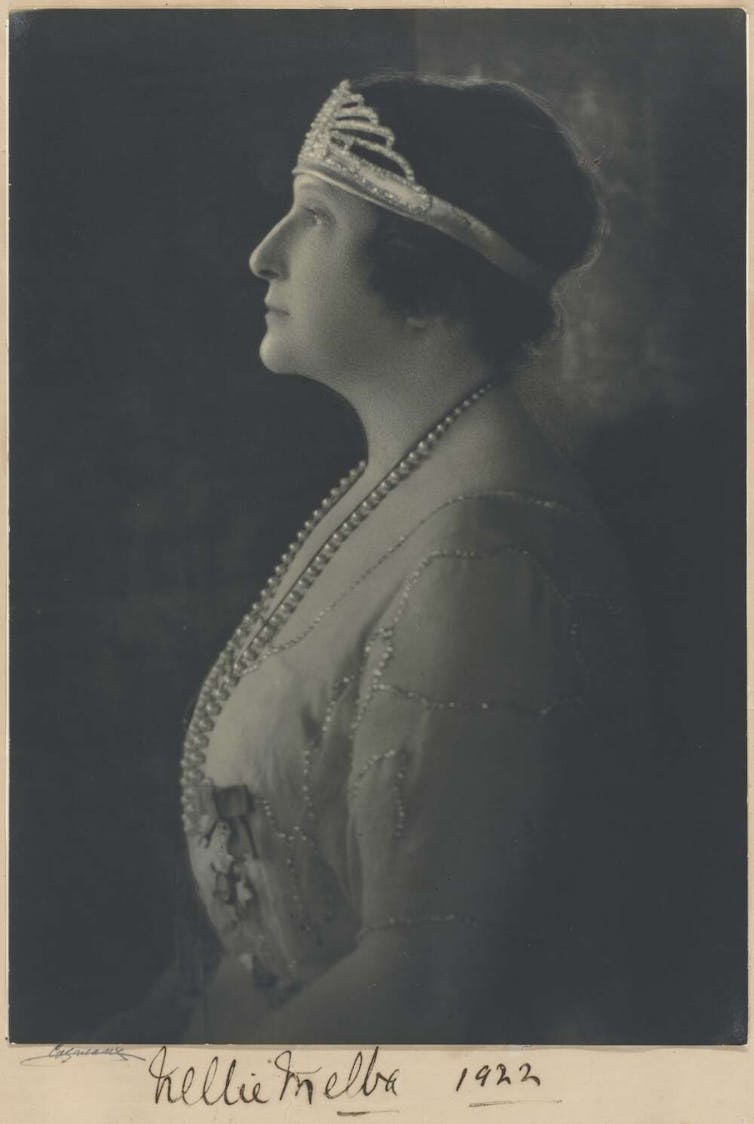 Melba photographed by Harold Cazneaux in 1922, at the age of 62. Her jawline has been altered to create a more ‘flattering’ line. Trove

In what could be characterised as a form of “pre-mythologising”, Melba commissioned a bust by Bertram Mackennal. When the bust was completed in 1899, she promptly gifted it to the National Gallery of Victoria, saying:

may I express the hope that I am not wholly forgotten in our beloved country. 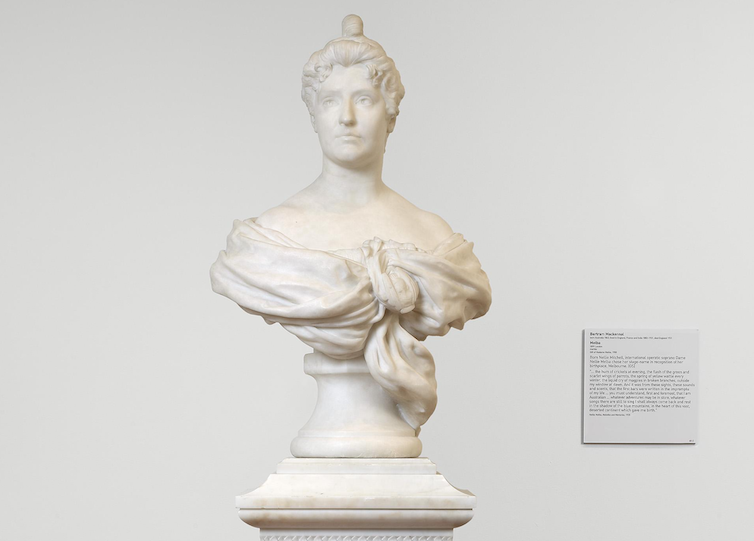 2. She was shrewd with money

A clever business woman, who always controlled her own interests, Melba only engaged managers for short periods of time in foreign markets.

According to one of her biographers, Joseph Wechsberg, Melba had no time for dinner invitations that carried the implication of a little performance. Once at the party, she would announce she would sing, but only if they would “sign a little cheque”.

She once quoted a fee of £500 to an American socialite who asked her to dinner and to sing afterwards — A$71,000 today.

3. Her OBE was not for her singing

Melba lost five relatives at Gallipoli, and in 1915 she single-handedly spearheaded a charitable endeavour in the form of Melba’s Gift Book of Australian Art in support of Belgian war relief efforts.

Filled with colour plate illustrations from significant Australian artists and writers such as Arthur Streeton, Norman Lindsay and Henry Lawson, the front cover is inscribed with the words “the entire profits from the sale of this book will be devoted by Madam Melba to the Belgian Relief Fund”.

Melba spoke passionately about her love for Belgium in the opening pages of the book:

[…] I made my debut there; my first appearance in opera was in Brussels, and I can still hear the cheers of my first audience, the kindly, warm-hearted Belgians whose generous recognition of the unknown artist from distant Australia gave me hope and courage to persevere.

While Melba is known for her astonishing musical talent, she became a Dame in 1918 in recognition of this charitable work.

4. She was a gossip magazine staple

Celebrity needs both fame and commodity, and Melba ensured her renown reached far beyond the concert hall. Even Australians who could have never heard her sing because they lived in regional areas were avid consumers of her as a product.

You could buy cartes-de-visite of her in costume, or eagerly read newspaper and magazine gossip about her poorly concealed affair with the Duc d'Orleans. From 1904, recordings of her singing could be purchased; and in 1926 she published her own vocal method: a hit with singing students, and still used today.

As early as her 1902 tour of Australia, Melba was being described as “Australia’s Gifted Daughter”. In her farewell tour of the late 1920s she was elevated to “Australia’s Greatest Daughter” 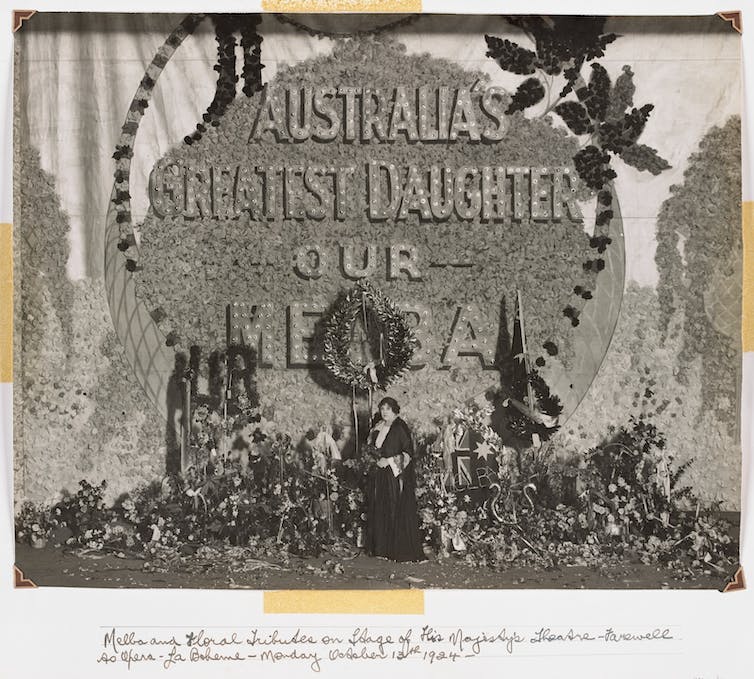 The latter term was also used by the press after her death in 1931. This description of Melba speaks to the collective pride and ownership Australians felt about her.

This pride endures today: where there are highways, tunnels, concert halls, suburbs and streets named after her — as well as her face on our $100 note.

Melba has appeared on Australia’s $100 note since 1996. Reserve Bank of Australia

5. But she didn’t always love being a celebrity

Melba was fatigued at times by the pressure of singing roles as she aged, and had two extended periods of rest in Switzerland in 1890 and 1897 to recover from vocal nodules. 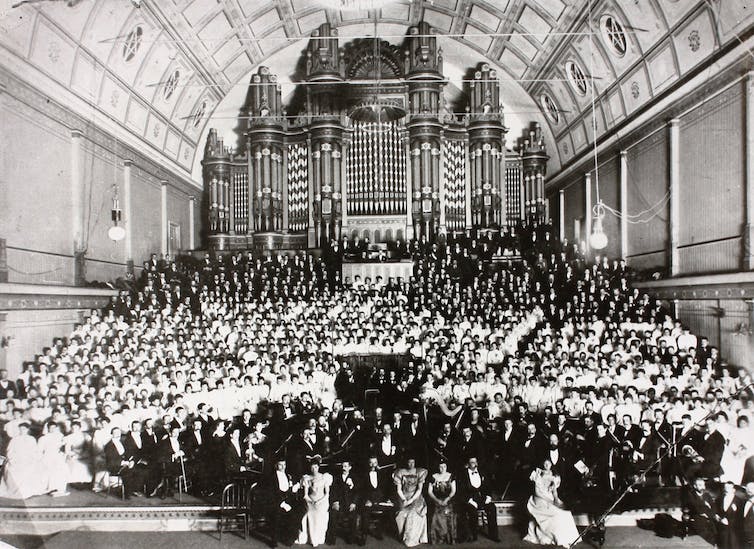 Melba and other dignitaries in the foreground with a large orchestra and choir extending back to the organ pipes at a Nellie Melba Performance in the Organ Gallery, Exhibition Building, Melbourne, 1907. Museums Victoria

While she did seek fame, carefully moulding the image she provided to the public, Melba would come to know its darker side. She remarked in her biography, “everybody who has known fame has also known the agonies which fame brought”.