Recent media reports suggest drink spiking at pubs and clubs may be on the rise.

“Drink spiking” is when someone puts alcohol or other drugs into another person’s drink without their knowledge.

Alcohol is actually the drug most commonly used in drink spiking.

The use of other drugs, such as benzodiazepines (like Rohypnol), GHB or ketamine is relatively rare.

These drugs are colourless and odourless so they are less easily detected. They cause drowsiness, and can cause “blackouts” and memory loss at high doses.

Perpetrators may spike victims’ drinks to commit sexual assault. But according to the data, the most common type of drink spiking is to “prank” someone or some other non-criminal motive.

So how can you know if your drink has been spiked, and as a society, how can we prevent it?

Read more: Weekly Dose: GHB, a party drug that's easy to overdose on but was once used in childbirth

How often does it happen?

We don’t have very good data on how often drink spiking occurs. It’s often not reported to police because victims can’t remember what has happened.

If a perpetrator sexually assaults someone after spiking their drink, there are many complex reasons why victims may not want to report to police.

Read more: Almost 90% of sexual assault victims do not go to police — this is how we can achieve justice for survivors

One study, published in 2004, estimated there were about 3,000 to 4,000 suspected drink spiking incidents a year in Australia. It estimated less than 15% of incidents were reported to police.

It found four out of five victims were women. About half were under 24 years old and around one-third aged 25-34. Two-thirds of the suspected incidents occurred in licensed venues like pubs and clubs.

According to an Australian study from 2006, around 3% of adult sexual assault cases occurred after perpetrators intentionally drugged victims outside of their knowledge.

How can you know if it’s happened to you?

Some of the warning signs your drink might have been spiked include:

If you think your drink has been spiked, you should ask someone you trust to get you to a safe place, or talk to venue staff or security if you’re at a licensed venue. If you feel very unwell you should seek medical attention.

If you believe your drink has been spiked or you have been sexually assaulted, seeking prompt medical attention can assist in subsequent criminal prosecution. Medical staff can perform a blood test for traces of drugs in your system.

How can drink spiking be prevented?

Most drink spiking occurs at licensed venues like pubs and clubs. Licensees and people who serve alcohol have a responsibility to provide a safe environment for patrons, and have an important role to play in preventing drink spiking.

This includes having clear procedures in place to ensure staff understand the signs of drink spiking, including with alcohol.

Preventing drink spiking is a collective responsibility, not something to be shouldered by potential victims.

Licensees can take responsible steps including: 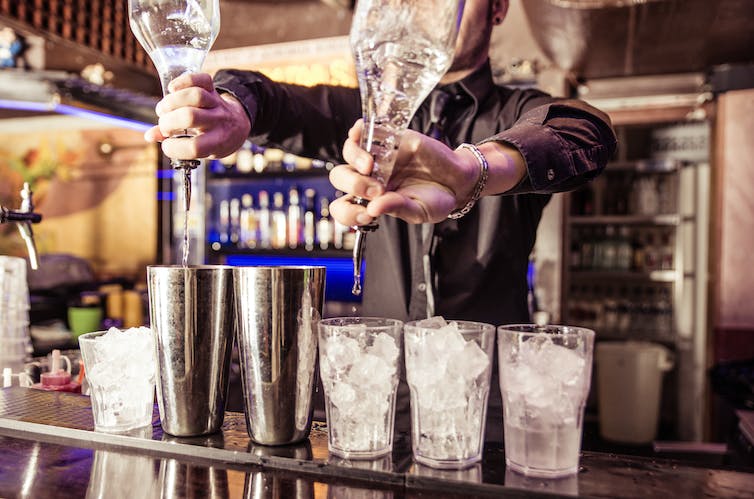 Bartenders should be wary of ‘red flag’ drinks requests like people asking for double or triple shots. Shutterstock

A few simple precautions everyone can take to reduce the risk of drink spiking include:

What are the consequences for drink spiking in Australia?

It’s a criminal offence to spike someone’s drink with alcohol or other drugs without their consent in all states and territories.

In some jurisdictions, there are specific drink and food spiking laws. For example, in Victoria, the punishment is up to two years imprisonment.

In other jurisdictions, such as Tasmania, drink spiking comes under broader offences such as “administering any poison or other noxious thing with intent to injure or annoy”.

Spiking someone’s drink with an intent to commit a serious criminal offence, such as sexual assault, usually comes with very severe penalties. For example, this carries a penalty of up to 14 years imprisonment in Queensland.

There are some ambiguities in the criminal law. For example, some laws aren’t clear about whether drink spiking with alcohol is an offence.

In an emergency, call triple zero (000) or the nearest police station.

If you’ve been a victim of drink spiking and want to talk to someone, the following confidential services can help: