Issues that matter to families on a daily basis, such as childcare, parental leave and flexible working arrangements, are often referred to as “women’s issues”. This focuses policy interventions solely on mothers, limiting the solutions that are possible and concealing how these issues affect dads.

As part of an ongoing research project we analysed the parental leave policies of 36 Australian public universities. We have found a number of contradictions in the way parental leave is allocated to mothers and fathers. By requiring them to nominate themselves as primary and secondary carers, the effect of this system is to perpetuate the gap between genders.

The provisions for mothers aren’t perfect, but they do offer a meaningful amount of well-paid leave for women to bond with and care for their children. Although many universities avoid using the term maternity leave, we found it has simply been replaced with “primary carer”. The terms “primary and secondary carers” appear less gendered but are effectively proxy categorisations for the traditional mother as caregiver and father as breadwinner.

These terms create a divide between mothers and fathers, ranking them in an unhelpful way. It starts families on an unequal course that pigeonholes both parents. We suggest the terms should be dropped in favour of equal parental leave policies in name and in action.

In March, the Australia Institute reported the gender pay gap is a staggering 31.2%. This gap between the average earnings of men and women is higher than the often reported 13.4%, because it includes part-time employees in the calculation. Excluding part-time working women is a glaring omission, which conceals the full story of the gap between what men and women earn.

The rates of women employed part-time are high in Australia compared to the OECD average. Australian mothers bear the brunt of domestic tasks and often work part-time so they have time for pick-ups, drop-offs and extracurricular activities. This penalises women financially, leaving them with lower earnings, less superannuation and limited career progression.

We know parenthood is a substantial contributor to the gender pay gap — it’s known as the motherhood penalty. 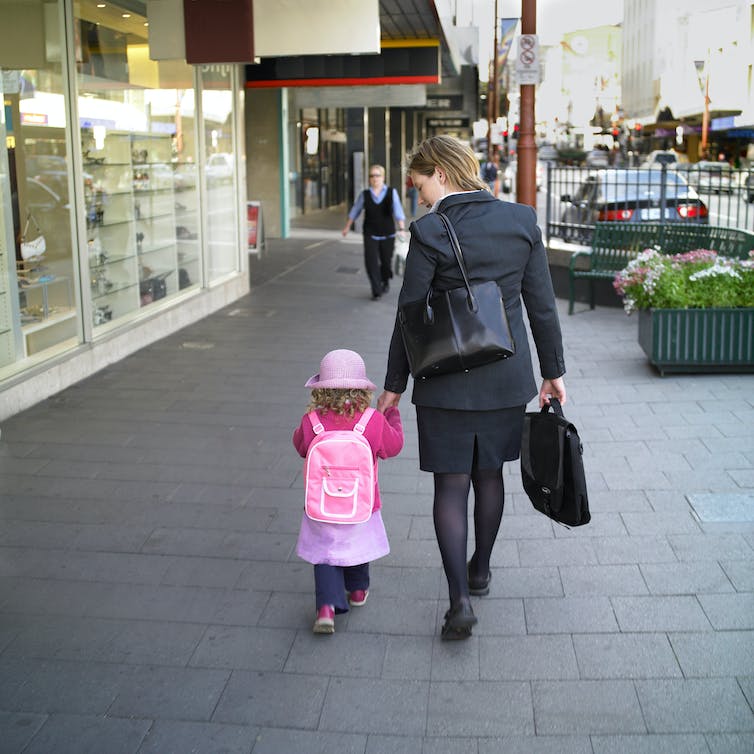 More often than not it’s women who must find time to drop off and pick up children from childcare and school. Shutterstock

With a gender pay gap of over 30%, it makes sense that most families opt to keep the higher-paid dad in full-time employment. At present, ABS statistics show women take 93.5% of primary parental leave and men take 96.1% of secondary parental leave. But that means dads lose out on time with their kids.

Caring is undervalued in Australia. Our government parental leave scheme is one of the least generous among OECD countries. The policy also perpetuates parental inequality.

One month of parental leave reserved for Australian dads paid at a meaningful rate can help to establish a more equal share of family tasks from the beginning. Best practice is 80% of earnings, with a cap. The result will be happier families overall. 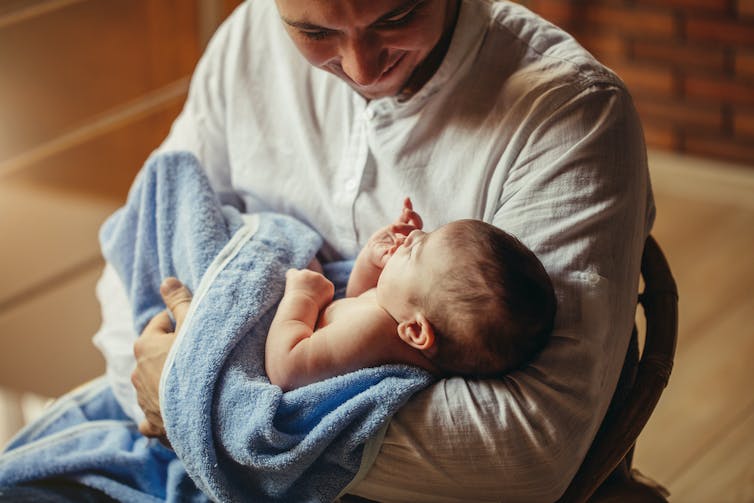 Families and society would benefit from dads being given a meaningful amount of paid leave to bond with and care for their children. Shutterstock

There is a fatherhood penalty too

At some universities, even with proof, dads are entitled to less leave as primary carers than mums, or no paid leave at all. Worse still, even when the dad’s partner works for another organisation, some universities deduct the leave the partner has taken from the dad’s entitlement. This doesn’t apply to mums with a partner who works for another organisation. 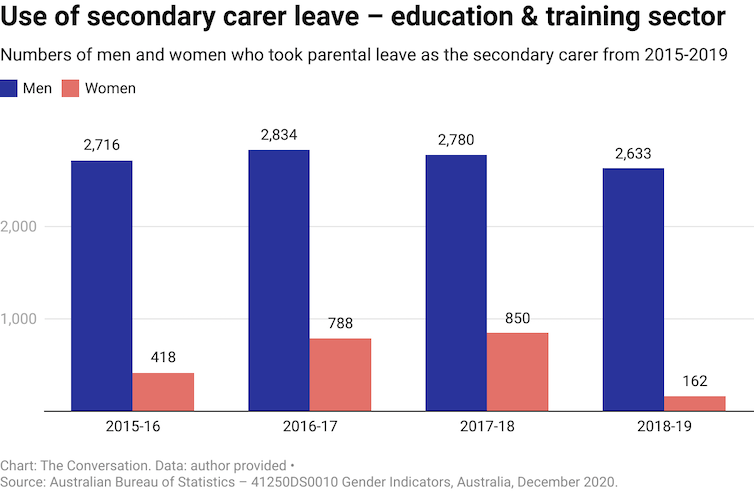 We often talk about the motherhood penalty, but maybe it is time to tackle the fatherhood penalty? Read more: Paid parental leave plan ignores economics of well-functioning families Ticking the parental leave policy box Some universities have been publicly acknowledged for their progressive, generous, flexible and inclusive parental leave policies for new dads. To qualify among Australia’s top 20 parental leave employers, these universities must provide at least 12 weeks’ paid leave for primary carers and two weeks for secondary carers. They must also offer flexible work practices and primary carer’s leave for at least a year after the child’s birth. However, the devil is in the detail, which sets a low bar. It allows universities to tick the “generous parental leave policy” box, without offering families real choices about how parents spend their time. If universities fail to offer meaningful, easy-to-access parental leave to dads, they will fail to take it up. This indirectly strengthens the academic career model that values an employee with an unbroken commitment to work. If we want to close the gender pay gap, we need to take steps towards parental equality and eradicate the terms primary and secondary caregivers. Some businesses in the private sector have done this, making parental leave policies gender-neutral, more flexible and easier for dads to access. Our findings suggest universities are not the progressive institutions many of us expect them to be. Instead, they reinforce traditional, conservative values that block parental equality. Universities, other employers and the Australian government need to value both mums and dads and offer equitable parental leave policies in the true sense of the term.