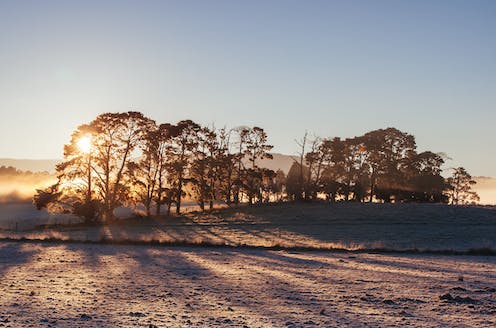 Across most of Australia this week, people have woken up and thought “Goodness, it’s cold.” Summer doonas are being changed to winter doonas. Heaters are being switched on. Ugg boots are being dug out of storage.

Yes, some of this is normal seasonal transition. But at least a portion of it is due to a particularly vigorous cold front that swept across southeast Australia over the weekend, dragging with it an unusually cold air mass.

Canberra on Monday night got to -2.6℃, which is a new record low for this monitoring station for April (the previous lowest for April was -1.9℃ in April 2013).

Another strong cold front is forecast to move across the area on Thursday into Friday with snowfall to 800 metres for Tasmania, and about the Alpine peaks of New South Wales and Victoria.

For any families making the most of the last weekend of school holidays by camping or being outdoors — pack the thermals, because the mornings are going to be cold!

Frost is forecast across many parts southeast inland, away from the coast — but the days will milder, with blue skies and light winds. In other words, a beautiful Autumn day. Coastal campers can expect a bit more cloud around and even the chance of a shower.

What is a cold front?

Cold fronts are a common feature we see on weather maps through southern parts of Australia. They’re often marked by cloud, a sudden change of wind direction, rainfall and (usually) a sharp drop in temperature; it’s a change in air mass from warmer conditions to colder conditions.

A lot of cold fronts develop over Antarctica and come pushing up over Australia, although sometimes they form due to the dynamics of the upper atmosphere interacting with the lower levels.

Interestingly, this cold front sweeping across parts of Australia at the moment actually engulfed the topical cyclone Seroja that moved very quickly across Western Australia in the last few days.

That cyclone is no longer visible at all from the radar.

Chilly in Victoria and NSW

It was the coldest start to the year across many parts of eastern Victoria on Monday night and into the morning.

That was partly due to the cold air mass in the wake of this weekend’s cold front, combined with clear skies, which means there was no cloud acting as a blanket to lock in warmth.

Tuesday saw a temporary lull in the cooler weather, with warmer northerly winds developing ahead of another approaching cold front. These northerly winds are forecast to be strong and gusty, elevating fire dangers throughout parts of South Australia (where a fire weather warning is currently in place).

There is also a severe weather warning currently in place for locally damaging winds for central South Australia, Victoria and Tasmania.

The damaging winds are forecast to contract eastwards and clear during Wednesday.

Dust storms are also forecast to move from South Australia into northwest Victoria with these windy conditions, as dust and dirt from inland Australia is whipped up and brought over the area.

More cold on the way

A second, even colder front is forecast to move through southeast Australia on Thursday and/or Friday. Temperatures will drop again, with snow forecast about elevated and alpine areas of Tasmania, Victoria and NSW.

Inland parts of the mainland across southeast Australia are forecast to be particularly chilly and frosty during the mornings this weekend, with clear skies and light winds on the forecast, with milder days to follow.