David Wadelton understands that photography is a form of time travel. Small Business, his new book of photographs, transports us to Melbourne’s vanishing architecture of interior workplaces created by largely working-class, post-war immigrants from Europe. It forms a natural complement to his first book, Suburban Baroque (2019), which paid homage to their domestic interiors.

Both books are the product of years of wandering, especially in the rapidly gentrifying inner north of Melbourne.

Wadelton has lived in Northcote since 1975, and has long shared his massive archive of initially black-and-white photos of his beloved suburb through his Facebook moniker Northcote Hysterical Society. Social media has proved an ideal vehicle for such obsessive localism, extending to the crowd-funding campaigns he uses to underwrite the publications. 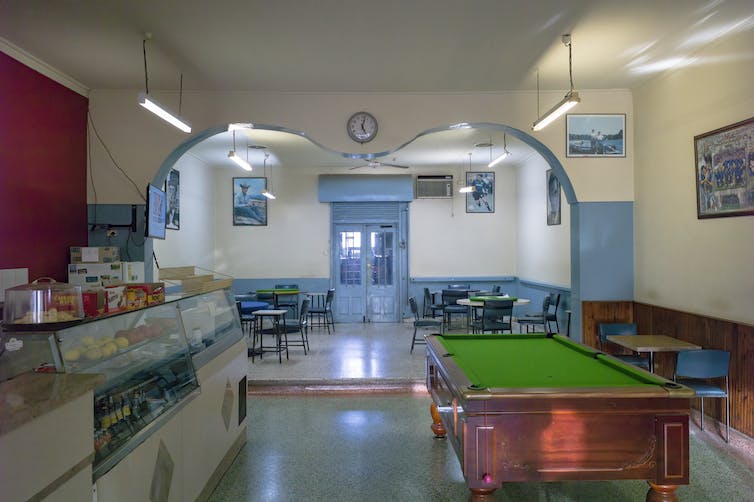 In some ways, what was once hysterical or obsessive has become the norm. As people spend more time in their local neighbourhoods, interest in their character and the history of the city seems to be flourishing. This is reflected in the popularity of Instagram accounts like @oldvintageMelbourne, with its nostalgic photos from the State Library’s archives.

Small Business apparently started with the decline of local fish and chip shops in Northcote. Over the course of the past decade, Wadelton photographed more than 600 small businesses, with over 140 featured in the book. The businesses are organised into groupings: milk bars, cafes, laundrettes, tailors, shoe shops and repairers, barbers, VHS shops, and so on. 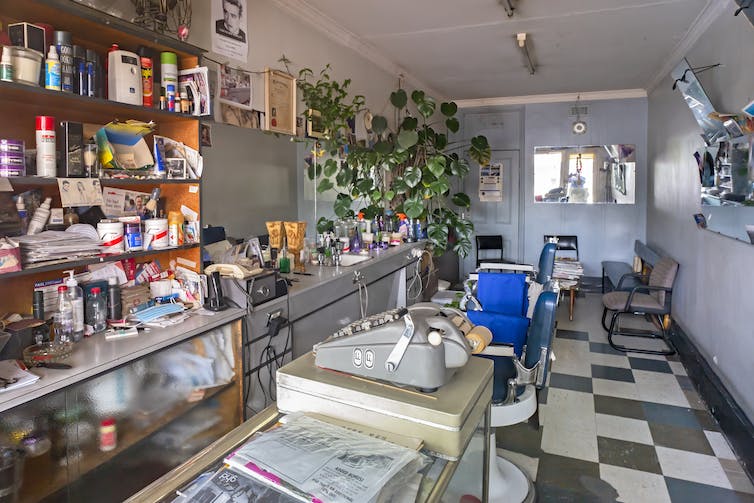 Wadelton’s photographs are carefully composed and depict the spaces in all their fluoro-lit, chaotic detail. They are far from iPhone snapshots. But their significance is as a collection rather than individual images.

Collected together in this book, they form an extraordinary record and a compelling artistic project. Paradoxically, the effect of the typological approach is to reveal how, in spite of superficially similarities, each business is unique.

Each image tells its own story, aided by all-too brief captions that offer a note about the owner or history of the business. From this book I learnt that Kosovo TV Repairs, which sat vacant for a decade around the corner from my house in North Fitzroy, opened in 1956, the year TV was first broadcast in Melbourne. 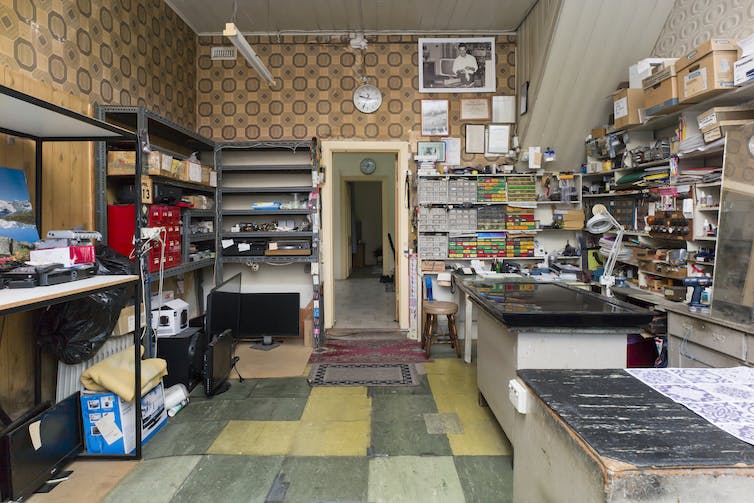 Wadelton photographed Monarch Cakes, the legendary cake shop in Acland St, St Kilda, in 2019. But it could be much earlier, because Monarch Cakes have been baking the same cakes from the same recipes since the 1930s.

On the wall behind the counter of Polish cheesecakes are a series of other time capsules — framed photographs of visiting celebrities and a signed copy of Aboriginal St Kilda footballer Nicky Winmar’s defiant anti-racist gesture from 1993. 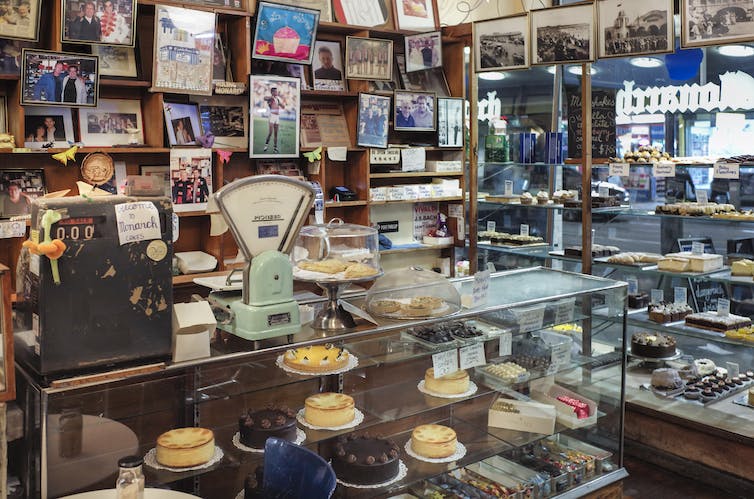 In her introductory essay, Natalie King OAM, Enterprise Professor of Visual Arts at the University of Melbourne, evokes the lost European Melbourne of Jewish coffee shops. As she puts it “Wadelton apprehends the idea of the city as a cosmopolis and small businesses as repositories of family stories”.

The families themselves are almost never pictured directly (a cobbler on the front cover of the book is misleading). But they appear regularly in the form of family photographs stuck behind the counter.

Wadelton makes portraits of dated interior décor, not to sneer but to honour the well lived-in spaces of people’s labour. His camera pays homage to all the bits and pieces used to provide retail services and repairs, and the various traces of social and retail exchange. 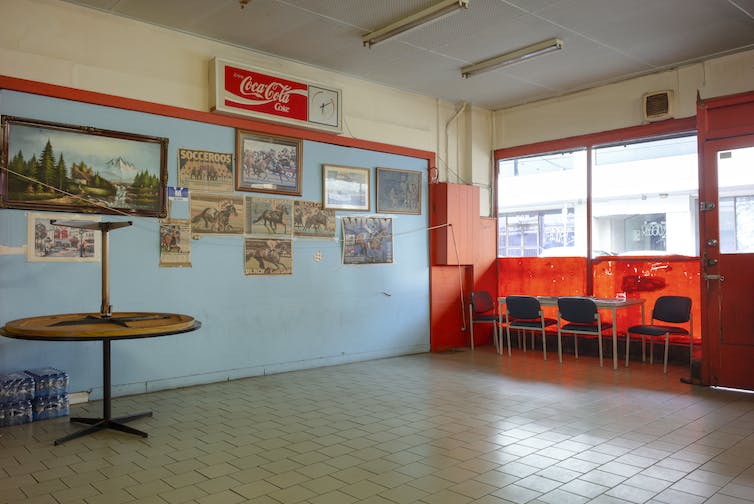 Nevertheless, the absence of actual people is critical. These are businesses on the verge of extinction. By the artist’s count, around a third of them have already closed.

These spaces belong to a different era — when things were made here, and TVs were worth repairing. They represent the life’s work of a former generation of migrants who made Melbourne the city it is today. As long-running establishments, often in family-owned buildings, they became part of the fabric of the city. 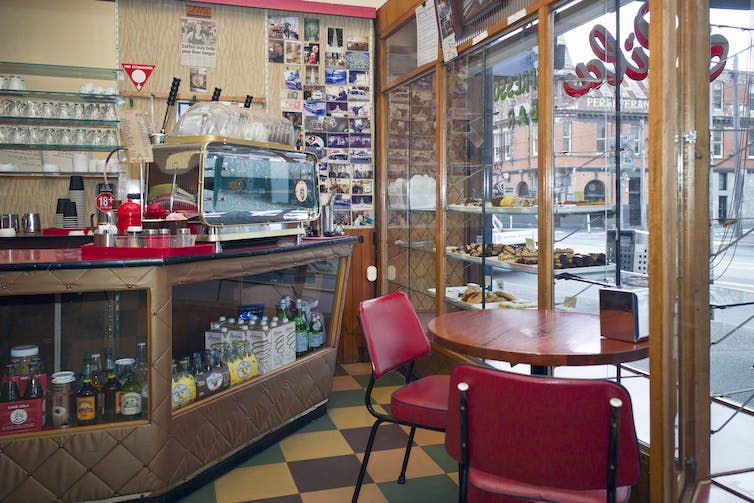 It’s all the more poignant that Small Business was completed during Melbourne’s long lockdown last year. For a variety of reasons, including the health of the owners, Wadelton tells me that some of those featured in the book have not re-opened since.

Perhaps conveniently, given Wadelton’s preferred aesthetic, normally busy places were deserted during COVID-19. In some of the more recent images you can see tape markings on the floor and other signs of virus-induced social distancing measures. Photography revels in details. 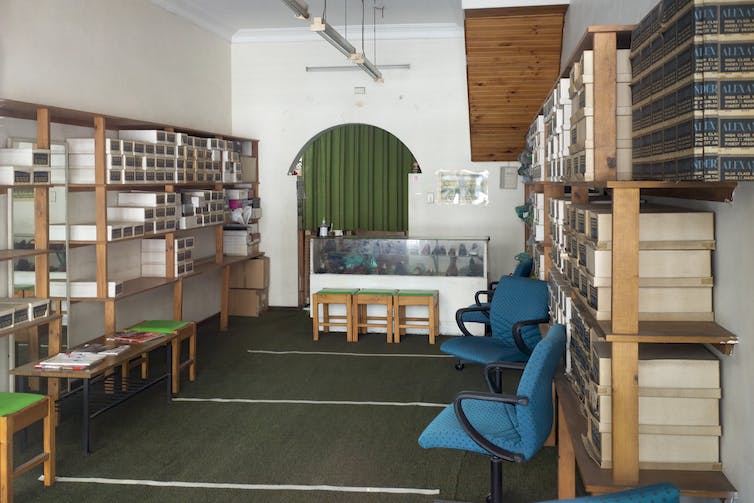 By documenting businesses as they disappear — building on precedents such as Eugène Atget’s documentation of Old Paris a hundred years earlier — Wadelton is doing Melbourne, and history, a great service. 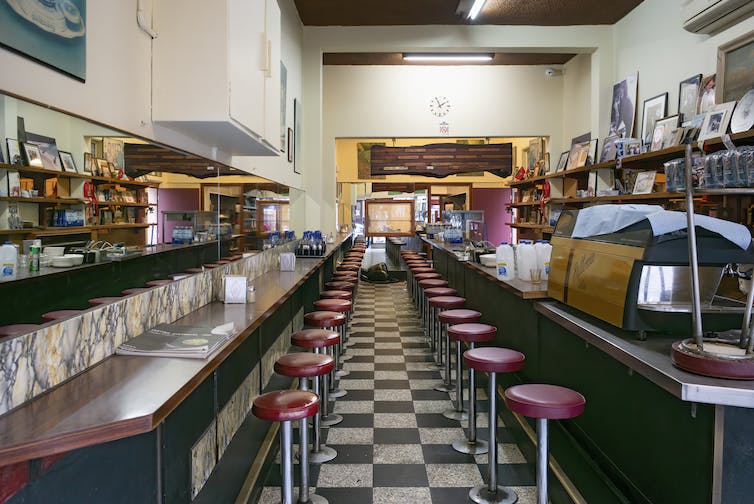 Above all, this book of photographs is a reminder of a slower and simpler way of living. Before chain stores, throwaway clothing and online retail. Before inner-city gentrification, and before wood panelling became fashionably ironic.