International students commonly share bedrooms so they can afford the rent. What is perhaps much more surprising is that our research suggests thousands are “hot-bedding” – their beds are available to them for only some hours of the day or night so others can use them the rest of the time. If our survey of more than 7,000 international students renting privately in Sydney and Melbourne is representative of the 758,154 international students in Australia in December 2019, this equates to about 22,750 students hot-bedding.

In our survey, 3% of all students answered yes to the question, “Do you have to hotbed (i.e. our bed is only available for a few hours of the day/night)?”. The survey also found about four in ten of these hot-bedding students were going without meals. And this was before nearly two-thirds of international students lost their jobs in the COVID-19 pandemic.

Read more: 'No one would even know if I had died in my room': coronavirus leaves international students in dire straits

These findings suggest a sizeable proportion of hot-bedders are struggling financially and in a vulnerable situation. Many said their circumstances were having a negative impact on their studies.

Despite this, almost eight in ten agreed or strongly agreed that they “enjoy living and studying in Australia”.

In our survey, 45% of hot-bedders were female. Just under two-thirds (65%) were university students, rather than studying at vocational or English language colleges.

How do they feel about rent costs?

Hot-bedders were generally satisfied with their rent – 23% disagreed with the statement, “I think the rent I pay is fair.”

Most students (58%) living less than 40 minutes away from their education provider paid more than $250 a week in rent.

About four in ten hot-bedders agreed they “go without necessities like food so I can pay for my accommodation” and had failed to make a rent payment because of a lack of funds. The rates for students who didn’t hot-bed were two in ten. 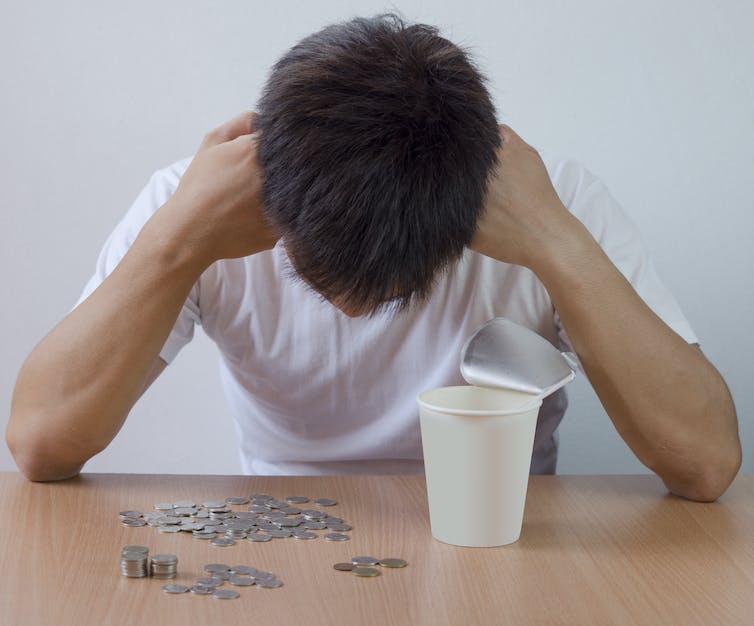 Many hot-bedding students have gone without meals because of lack of funds. Simpili/Shutterstock

Read more: 'God, I miss fruit!' 40% of students at Australian universities may be going without food

Almost half (48%) of hot-bedders agreed concern about paying the rent was having a negative impact on their studies.

How do they view their accommodation?

Despite having to hot-bed, just under eight in ten (78%) of these students said they were satisfied or very satisfied with the home they are renting.

Just over seven in ten (72%) agreed with the statement, “The home I rent is suitable for my needs.” Only 7% disagreed.

Only one in ten hot-bedders agreed the person they rent from did not keep the property well-maintained.

Just over one in four (27%) hot-bedders felt their home was overcrowded compared to 12% of non-hot-bedders.

Read more: Informal and illegal housing on the rise as our cities fail to offer affordable places to live

How secure do they feel?

Most hot-bedders reported they had a good relationship with their landlord or real estate agent. Only 6% said it was “bad” or “not very good”.

Close to half (45%) of hot-bedders said the person they pay rent to lives in the same accommodation. It’s unclear whether this is the actual landlord, or a person who sub-lets the property.

Two in three hot-bedders sensed they “could stay in this rental property as long as they want to”. Despite the seemingly good relationship of most hot-bedders with their landlord, just under one in three agreed that if they “complain about the standards of the property and maintenance problems [they] might be asked to leave”.

Although maintenance did not seem to be a major issue, just under four in ten hot-bedders agreed they were concerned the rent might be increased if they did ask for repairs. And 38% were anxious they “might be told to leave [their] property and be given a short time to leave”.

When asked, “In the last year, have you ever felt that you could become homeless?”, 37% answered yes. This compares to 17% of non-hot-bedders.

Just under four in ten hot-bedders agreed or strongly agreed that “stress around the possibility of losing my accommodation is affecting my academic studies”.

What is their employment status?

Half of the students who hot-bed had paid work at the time of the survey and of those employed 48% reported that their landlord employed them, compared to 17% of the other students in paid work.

A large proportion felt they were poorly paid and their job was insecure. Less than half of the hot-bedders felt they were well-paid. Only one in four disagreed with the statement, “My current job is insecure.”

Just over eight in ten said losing their job would cause them financial difficulties.

The chart below shows eight measures of financial stress adapted from the Australia Bureau of Statistics. We added an item on affordability of textbooks. 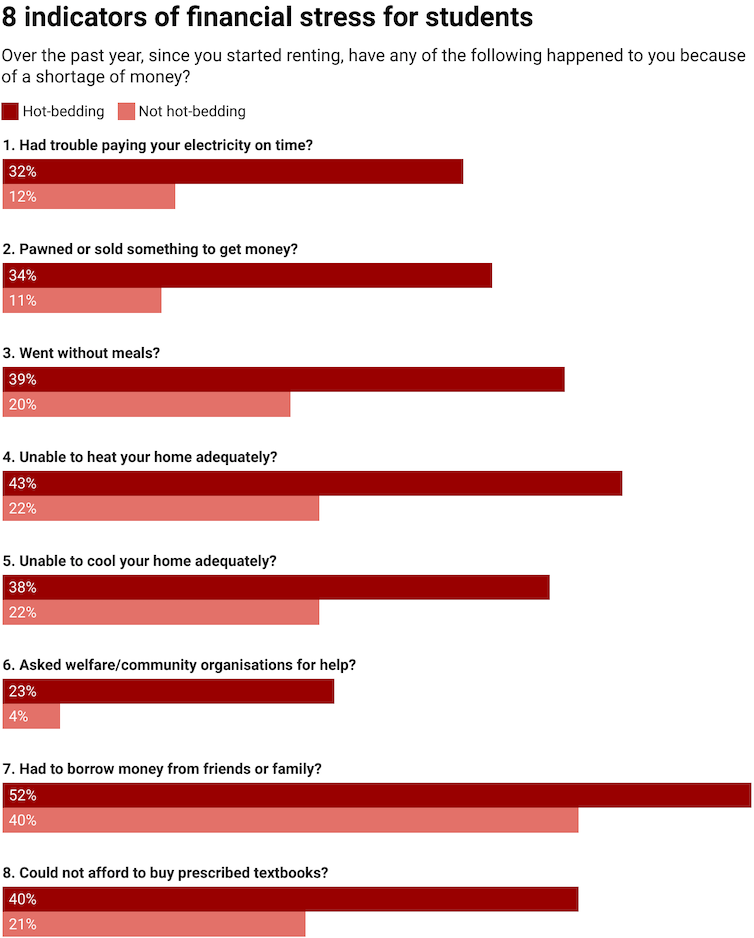