Paris Hilton — model, reality TV star, actor, pop singer and DJ — gained worldwide notoriety in 2003 because of a leaked sex tape. Over the years she has been viciously parodied and lampooned, famously on South Park and in World of Warcraft.

But she has endured — and this week launched a new podcast, This Is Paris.

In the first episode, Hilton and her co-host, US television personality Hunter March, discuss love, commitment and hard work. Hilton’s fiance, Carter Reum also appears — apparently as a favour to her “because you know I hate this stuff”. The episode ends with a modern advice column in which Hilton responds to fan voicemail questions, including “how do I look hot on Zoom?”

In her recent tell-all documentary of the same name Hilton opened up about her difficult experiences growing up in the spotlight and alleged she had endured traumatic abuse at boarding school as a teenager.

The treatment of female celebrities

As with Framing Britney Spears (2021), the documentary prompted timely discussion of the treatment of women celebrities and their struggle to maintain agency within the structures of Hollywood and the media. 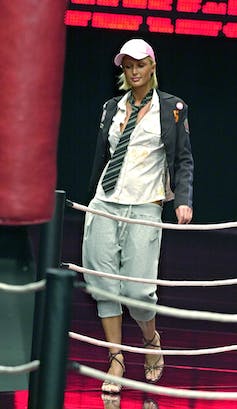 Born in 1981, Hilton was first known as an heiress to the Hilton hotels empire, founded by her great-grandfather. She began modelling as a child, and by the age of 18 was a socialite regularly photographed in the A-list New York party scene.

The 1990s has been dubbed “the tabloid decade”, and along with celebrity compatriots such as Lindsay Lohan and Tara Reid, Hilton was ruthlessly torn down for her perceived moral failings. Notably, it was young women who bore the brunt of this criticism — not men who behaved “badly”.

When she was 22, in 2003, internet pornography company Marvad Corp leaked a sex tape of Hilton and her then-boyfriend Richard Salomon (released as One Night in Paris in 2004).

Hilton sued the internet company she claimed illegally distributed the video (the case was later dismissed). In her documentary, she spoke about its release:

That was a private moment with a teenage girl not in her right headspace. But everyone was watching it and laughing, like it’s something funny. If that happened today it would not be the same story at all. But they made me the bad person. Like I did something bad.

It was my first real relationship. Eighteen. I was so in love with him and I wanted to make him happy. And I just remember him pulling out the camera. And he was kind of pressuring me into it.

But it was this leaked sex tape that ultimately helped solidify her status as a celebrity. In 2003, Hilton and fellow socialite Nicole Richie began filming The Simple Life (2003–2007), right when reality TV’s popularity was soaring.

The show, following Hilton and Richie as they attempted working-class jobs such as farming and fast food service, drew 13 million viewers the night it premiered. This humiliation of the privileged Hilton gave audiences an opportunity to recognise her for more than her tabloid presence.

She became a celebrity who was famous for being famous.

Changing with the times

Over the years, Hilton morphed into a legitimate celebrity through her sheer deftness at embodying — and doing the work of — celebrity itself.

She released her first fragrance in 2004, and her debut single in 2006. If bitterly, she even received some critical praise for her titular debut album: “it’s really not all that bad,” said one critic.

She forayed into acting, with bit parts on The O.C. and Veronica Mars, reaching a peak when she starred in the schlocky horror film House of Wax (2005). Like her pop album, her performance in this film was received with a combination of ridicule and begrudging appreciation.

In 2012, the year electronic dance music (EDM) was named the fastest growing mainstream music genre in the US, Hilton began her lucrative EDM DJ endeavours earning up to US$1 million per 90 minute set. She continues to DJ, including at the reputable Tomorrowland festival in Belgium in 2019. 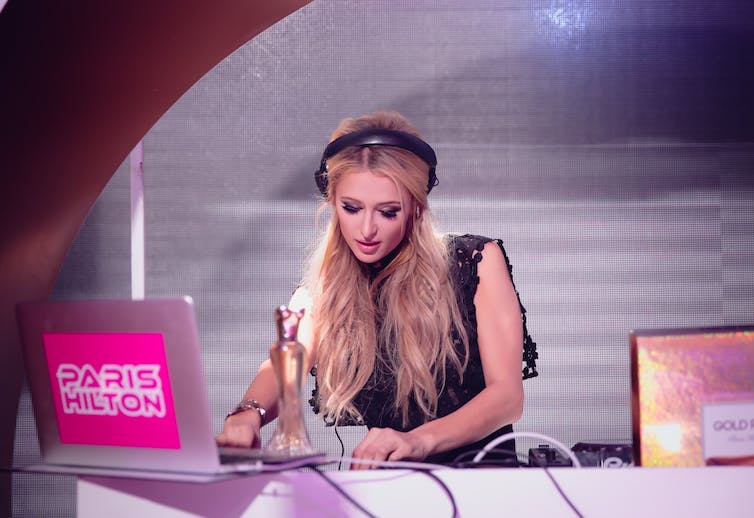 Hilton DJing at the Ministerium nightclub, Odessa, Ukraine in 2016. Shutterstock

Up close and personal

In the current digital media epoch, “authenticity” is required of celebrities. Generating a persona that allows her fans a seemingly real connection, Hilton is once again making savvy use of the zeitgeist.

With a tone that feels self-aware and bold, Hilton’s new podcast is reflective not only of her experiences as a celebrity, but also her resilience.

The overtly constructed nature of many of Hilton’s former pursuits might attract little admiration in today’s social media spaces — and as an heiress, she is undoubtedly from a privileged background.

Yet her current intimate mode of celebrity is likely to lengthen her celebrity shelf life. As she strives for “authenticity”, Hilton is again rewriting her own celebrity script.