In Western Australia’s northeast Kimberley region, on Balanggarra Country, a two-metre-long painting of a kangaroo spans the sloping ceiling of a rock shelter above the Drysdale River.

In a paper published today in Nature Human Behaviour, we date the artwork as being between 17,500 and 17,100 years old — making it Australia’s oldest known in-situ rock painting.

We used a pioneering radiocarbon dating technique on 27 mud wasp nests underlying and overlying 16 different paintings from 8 rock shelters. We found paintings of this style were produced between 17,000 and 13,000 years ago.

Our work is part of Australia’s largest rock art dating initiative. The project is based in the Kimberley, one of the world’s premier rock art regions. Here, rock shelters have preserved galleries of paintings, often with generations of younger artwork painted over older work.

By studying the stylistic features of the paintings and the order in which they were painted when they overlap, a stylistic sequence has been developed by earlier researchers based on observations at thousands of Kimberley rock art sites.

They identified five main stylistic periods, of which the most recent is the familiar Wanjina period.

The oldest style, which includes the kangaroo painting we recently dated, often features life-sized animals in outline form, infilled with irregular dashes. Paintings in this style are said to belong to the “Naturalistic” stylistic period.

The ochre used is an iron oxide in a red-mulberry colour. Unfortunately, no current scientific dating method can determine when this paint was applied to the rock surface.

A different approach is to date fossilised insect nests or mineral accretions on the rock surfaces that happen to be overlying or underlying rock art pigment. These dates provide a maximum (underlying) or minimum (overlying) age range for the painting.

Our dating suggests the main period for Naturalistic paintings in the Kimberley spanned from at least 17,000 to 13,000 years ago.

Very rarely, we’ll find mud wasp nests both overlying and underlying a single painting. This was the case with the painting of the kangaroo, made on the low ceiling of a well-protected Drysdale River rock shelter.

We were able to date three wasp nests underlying the painting and three nests built on top of it. With these ages, we determined confidently the painting is between 17,500 and 17,100 years old; most likely close to 17,300 years old. 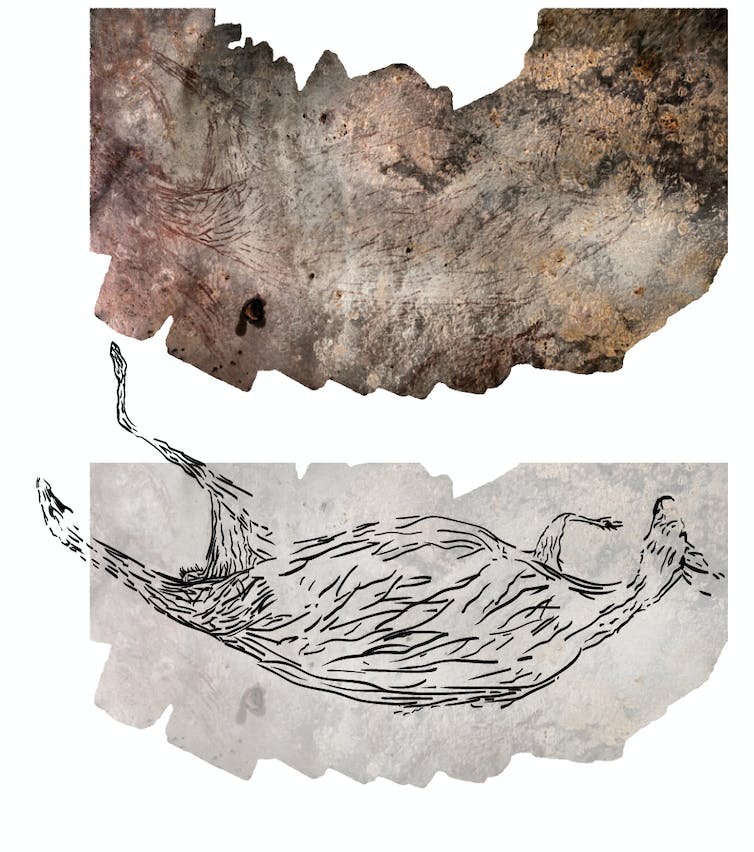 The 17,300 year old painting of a two-metre long kangaroo can be found on the ceiling of a Kimberley rock shelter. Damien Finch. Illustration by Pauline Heaney

Our quantitative ages support the proposed stylistic sequence that suggests the oldest Naturalistic style was followed by the Gwion style. This style featured paintings of decorated human figures, often with headdresses and holding boomerangs.

From animals and plants to people

Research we published last year shows Gwion paintings flourished about 12,000 years ago — some 1,000-5,000 years after the Naturalistic period. 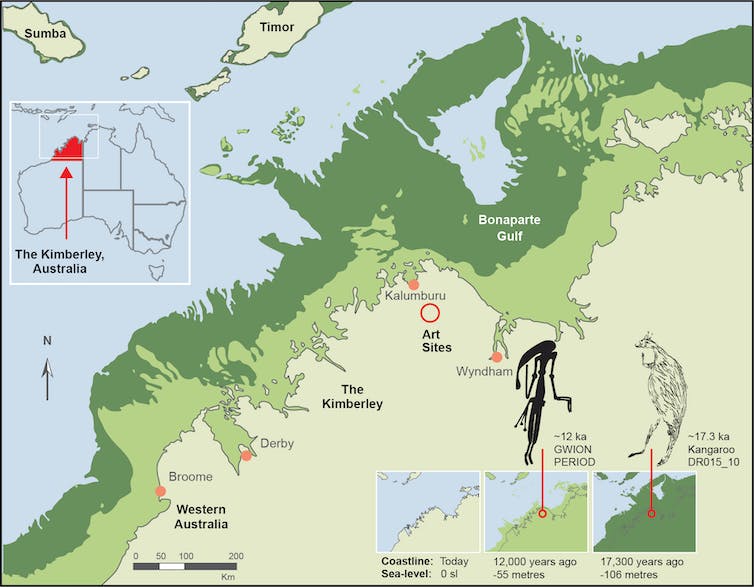 This map of the Kimberley region in Western Australia shows the coastline at three distinct points in time: today, 12,000 years ago (the Gwion period) and 17,300 years ago (the earlier end of the known Naturalistic period). Illustration by Pauline Heaney, Damien Finch

With these dates, we can also partially reconstruct the environment in which the artists lived 600 generations ago. For example, much of the Naturalistic period coincided with the end of the last ice age when the environment was cooler and drier than now.

During the Naturalistic period, 17,000 years ago, sea levels were a staggering 106 metres below today’s and the Kimberley coastline was about 300 kilometres further away, more than half the distance to Timor. 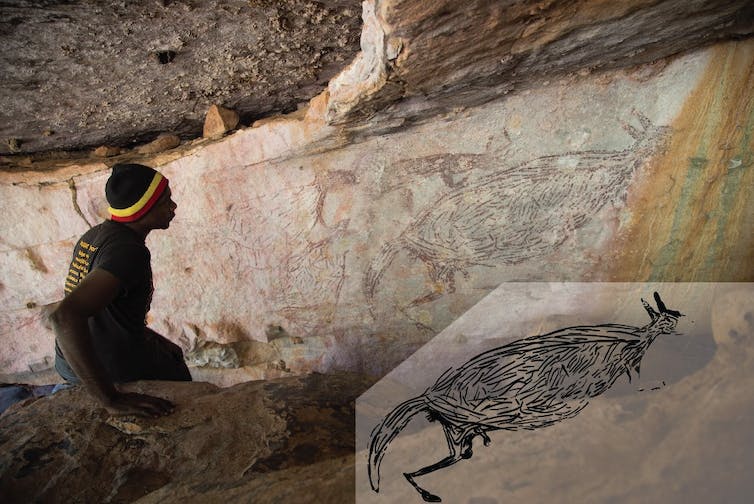 Traditional Owner Ian Waina inspecting a painting of a kangaroo that we now know is more than 12,700 years old, based on the age of overlying mud wasp nests. INSET: an artist’s recreation of the in-situ rock painting. Photo by Peter Veth / Balanggarra Aboriginal Corporation. Illustration by Pauline Heaney.

By the Gwion period around 12,000 years ago, sea levels had risen to 55m below today’s. This would undoubtedly have prompted long-term adjustment to territories and social relations.

This is when Aboriginal painters depicted highly decorated human figures, bearing a striking resemblance to early 20th-century photographs of Aboriginal ceremonial dress. While plants and animals were still painted, human figures were clearly the most popular subject.

Read more: 'All things will outlast us': how the Indigenous concept of deep time helps us understand environmental destruction

Reaching into the past

While we now have age estimates for more paintings than ever before, more work is continuing to find out, more accurately, when each art period began and ended.

For example, one minimum age on a Gwion painting suggests it may be more than 16,000 years old. If so, Gwion art would have overlapped with the Naturalistic period but further dates are required to be more certain.

Acknowledgements: we would like to thank the Balanggarra Aboriginal Corporation, the Australian National Science and Technology Organisation, Rock Art Australia and Dunkeld Pastoral Co for their collaboration on this work.