Sadly, history has largely forgotten the Rector Thomas Beverley. In 1695, he wrote a book predicting the world would end in 1697. In 1698 he wrote another book, complaining the world had ended but no-one had noticed. If he were alive today, he might be a Republican senator or perhaps a senior executive at Rupert Murdoch’s Fox News.

The defeat of Donald Trump is not quite the end of the world for Fox News, but it is the passing of a golden age, and the network has met it with a large dose of denialism. In the two weeks after Fox News called the US presidential election for Joe Biden, the network’s hosts and guests cast doubt on the results at least 774 times, according to Media Matters for America.

There has rarely, if ever, in any democracy been such a partnership between a news network and a government leader as there was between Fox and Trump. Fox was the preferred conduit for his administration’s announcements and interviews. The president was also the network’s chief publicist, tweeting his views, often in real time, about what Fox News was broadcasting.

This was a mutually beneficial partnership. Trump got his views out without serious contradiction or questioning, while everyone in the political class had to give constant attention to Fox.

It also paid off commercially. While Fox News had been the leading cable news channel for 20 years, by 2020 it was the third-most-watched network in the country in prime time on weekdays – not just in cable, but all of television, behind only CBS and NBC. And 2020 was its most successful year yet. In the third quarter, its ratings were nearly double the year before.

Sean Hannity was the highest-rated show on cable, with an average audience of 4.45 million. And he was Fox’s highest-paid star, earning US$43 million a year according to Forbes magazine.

For Fox, Trump’s defeat was almost as painful as it was for Trump himself. After the election, its ratings fell sharply. In January, for the first time in two decades, it trailed behind the other two cable news channels, CNN and MSNBC. The day the Capitol was stormed, January 6, was CNN’s most watched day in the network’s history, and Fox only pulled just over half as many viewers (8.2 million to 4.6 million).

Read more: James Murdoch's resignation is the result of News Corp's increasing shift to the right – not just on climate

Indeed, the attack on the Capitol caught the Fox commentariat off balance and the network has been entertaining two contradictory theories since. The first is that it was a “false flag” operation mounted by far left groups masquerading as Trump supporters; the other is that the rioters were “solid Americans” and “deeply frustrated” (Tucker Carlson) and the “majority of them were peaceful” (Hannity).

None of Fox’s prime-time stars has yet blamed Trump for his role in inciting the riot. But they know others’ reports are wrong. Carlson asserted “they [unspecified] are lying to you” about the attacks. “The known facts bear no resemblance to the story they’re telling – they’re just flat out lying.” So that takes care of that.

At the same time as the network was bleeding audiences to its more mainstream competitors, it was also under attack on its right flank. Its most grievous sin here had been predicting on election night that Biden would win Arizona. This call – which several experts thought was premature, but which proved to be accurate – incurred the wrath of Trump and his supporters.

Rupert Murdoch was reported as telling colleagues the way Fox handled it had caused reputational damage and cemented the view among some Trump supporters that Fox had turned against him. Not coincidentally, the two people directly responsible for that call – Bill Sammon and Chris Stirewalt - were forced out in network changes after the election. 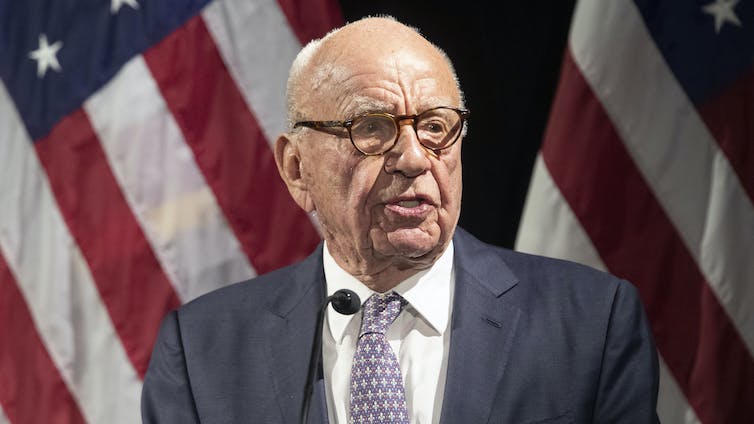 Two other, even more tribally right-wing news networks started to challenge Fox. Newsmax and One America News saw their ratings increase as they steadfastly supported the fantasy that the election had been stolen. In addition, there has been loose talk that Trump will start his own TV network to compete against Fox.

My guess is that each of these potential challengers will disappear or be much reduced in the near future. Establishing his own network would be beyond Trump’s very limited managerial prowess. The saving grace of his administration has been his incompetence. The two others lack Fox’s polish, variety of programming and resources.

Nevertheless, protecting the network against any market openings to the right seems to be the Murdochs’ main strategic response to the post-Trump challenges. Their most important decision has been to strengthen the opinion elements of their programming at the expense of the news operations.

Read more: To stay or cut away? As Trump makes baseless claims, TV networks are faced with a serious dilemma

The key to Fox’s rating strength has been its evening prime-time line-up. From 8pm to 11pm, Carlson, Hannity and Laura Ingraham each have an hour show. Fox will now devote the 7pm slot to another opinion program, taking the time slot away from news. It is ready to attack the Biden administration, with Hannity having attacked “the weak, the frail, the cognitively struggling Biden” on the day of his inauguration.

Tens of millions of Americans have no chance; they’re about to be crushed by the ascendant left. These people need a defender.

He and his colleagues, of course, are up for the battle. In his inaugural speech, Biden talked of the need for unity and said the US was threatened by racism, nativism, political extremism, white supremacy and domestic terrorism. As Carlson commented on this, a chyron under him asserted: “Party in power is demonizing half of the country”.

started the most sweeping mass censorship campaign in the history of this country.

A Republican strategist commented that these audiences “want their ‘news’ to affirm them rather than inform them”. The network will reach a much smaller ghetto, and attract less attention from others. But the essential Fox strategy for the new era is more of the same.