Shell-crushing predation was already in full swing half a billion years ago, as our new research published in the Proceedings of the Royal Society B reveals.

A hyena devouring an antelope carcass, a bonnethead shark feasting on hard-shelled crabs, a dog chewing on a bone: these are all examples of “durophagy”, which basically means “to eat hard parts”.

Durophagy typically involves crushing or chewing and is one of the most effective ways to consume a prey’s hard internal or external skeleton, including shells. While today this feeding style is most common among apex predators such as crocodiles, it can be seen right across the animal kingdom.

An age-old appetite for destruction

Durophagy extends far back in time. More than 500 million years ago, during the Cambrian period, an array of creepy and curious organisms were swimming, crawling and floating through Earth’s oceans.

Evidence of durophagy in the Cambrian usually comes in the form of shell injuries, and sometimes as fossilised poo containing shell fragments. But rarely in the fossil record can we identify the suspects responsible for this carnage.

Enter the arthropods — animals with exoskeletons and jointed legs. Modern examples include insects, spiders and crustaceans. During Cambrian times, there was one particular group of arthropod that dominated the oceans: the trilobites.

These now-extinct creatures had exoskeletons made entirely of “calcite”, which is effectively nature’s version of having a suit of armour made out of rock.

Looking like enlarged woodlice, some trilobite species after the Cambrian grew to be more than 90 centimetres in length. Most would have walked along the seafloor in search of their next meal.

Read more: A giant species of trilobite inhabited Australian waters half a billion years ago

A cannibal with an axe to grind

Lucky for us, some Cambrian trilobites are so well preserved we can study their non-calcite anatomy, including their appendages. What’s particularly interesting about these arthropods is they didn’t have jaws or other structures in the mouth to chew.

Instead, they used spines on their many pairs of legs to grind up or shred prey in a similar fashion to modern-day horseshoe crabs. 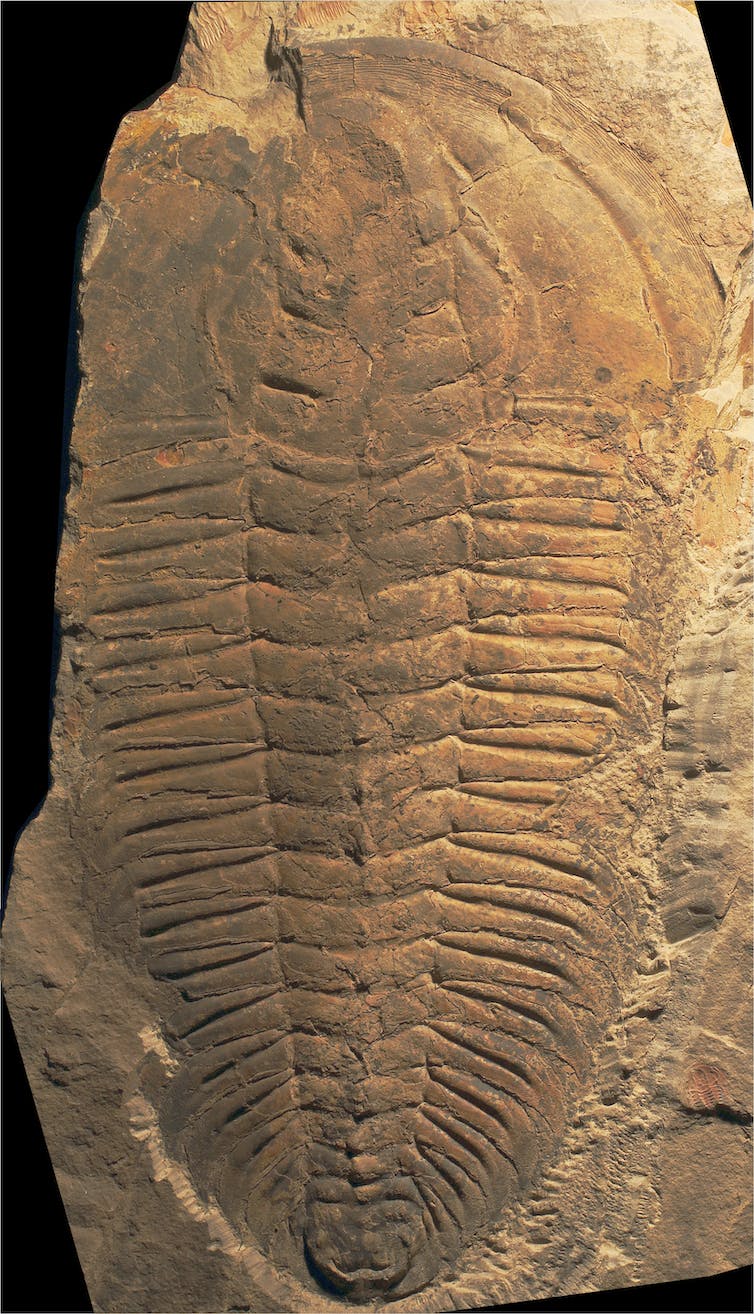 One of the largest known Cambrian trilobites, Redlichia rex, was found in South Australia. This species could reach up to 25cm in length and had large, spiny legs. Russell Bicknell

But despite being aware of this spectacular anatomical detail, nobody had ever tested whether trilobite species could potentially crush, or “chew”, shells with their spiny legs. We set out to find the answer.

Using advanced modelling techniques, we compared the legs of two Cambrian trilobite species, Olenoides serratus and Redlichia rex, to the legs of the modern horseshoe crab (Limulus polyphemus), which is a known clam eater.

We also compared them to another Cambrian arthropod, Sidneyia inexpectans, which is known to have been durophagous due to shell fragments found in its gut.

3D leg reconstructions of the modern horseshoe crab (top), Redlichia rex (middle) and Olenoides serratus (bottom). The spines used for shredding or crushing are visible on the inner part of the appendage, in green. Russell Bicknell, Katrina Kenny

Our modelling confirmed Sidneyia inexpectans was indeed capable of crushing shells, as indicated by its fossilised gut contents. However, it could not do this very effectively.

On the other hand Redlichia rex — Australia’s most menacing Cambrian trilobite, spanning 25cm and armed with bulky legs — was effectively built like a tank. As such, it was probably highly capable of shell-crushing destruction.

Separate to our modelling, past research has suggested Redlichia rex also ate other trilobites, including its own kind. Thus, this species represents one of the oldest known cannibals.

We found Olenoides serratus would have been unable to crush very much at all due to its very long, and therefore less powerful, leg spines. We concluded this particular trilobite was strictly on a soft seafood diet. 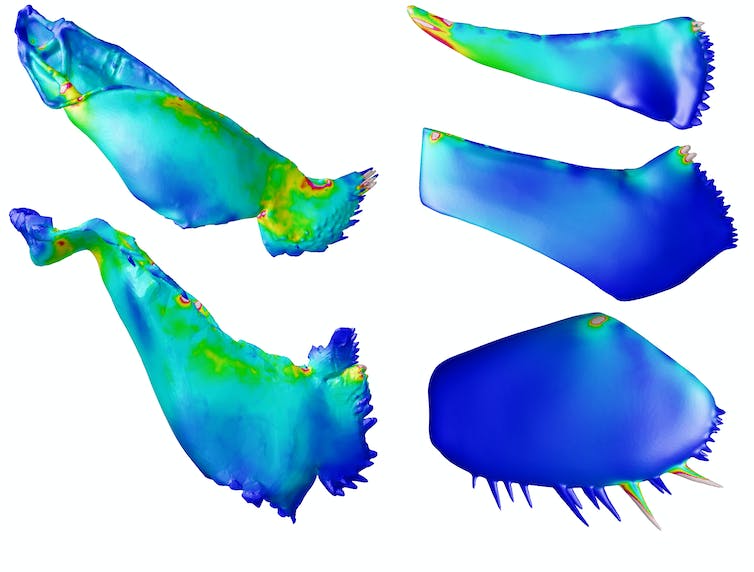 By showing which ancient arthropods were equipped for shell-crushing, our research paints a more vibrant picture of life underwater more than half a billion years ago.

During the dawn of animals, the emergence of this feeding style would have placed immense pressure on prey species with shells and skeletons — forcing them into an evolutionary ultimatum: become the tougher “nut to crack” or face extinction.