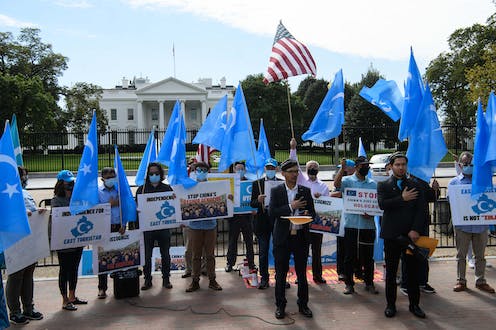 New Zealand has a strong history of protecting and promoting human rights at home and internationally, and prides itself on being an outspoken critic and global leader in this area. So, when the most serious accusation of human rights abuse — genocide — is made of one of its friends, how to respond?

This is precisely the situation now regarding China.

One of the final acts of the Trump administration was to bequest to incoming president Joe Biden the formal assertion that China had committed genocide against the predominantly Muslim Uyghurs and other ethnic and religious minorities in the Xinjiang region.

This would be a difficult position to reverse for Biden, even if he wanted to, although it appears the new administration has no such intention. Biden’s nominee as Secretary of State, Anthony Blinken, is also calling China’s Uyghur policy “genocide”.

In response to the Trump initiative, China sanctioned 28 “lying and cheating” Trump officials, labelling the accusation a “bold faced lie”.

But for now, the US has taken the lead on the issue. Canada came close but backed away from any formal finding of genocide. Britain, while also expressing concern, avoided labelling the “utterly abhorrent” treatment of the Uyghurs as genocide.

Read more: China is building a global coalition of human rights violators to defend its record in Xinjiang – what is its endgame?

Australia is also avoiding the description, but is leaving the door open to introducing penalties for Australian companies that source products made using forced labour in Xinjiang.

New Zealand is now under pressure to make a stand and to endorse the use of the term genocide to describe China’s treatment of the Uyghurs.

But there is good reason why nations are cautious when it comes to such accusations. In law, genocide is strictly defined as the “intent to destroy, in whole or in part, a national, ethnical, racial or religious group”.

This can involve killing members of the group, causing serious bodily or mental harm to its members, or deliberately inflicting conditions of life calculated to bring about its total or partial physical destruction.

Genocide can also be committed by imposing measures intended to prevent births within a group, and/or forcibly transferring children to another group.

The crime is specifically prohibited by the Genocide Convention, framed after the horrors of the Holocaust during WWII. It later became one of the core crimes the International Criminal Court (ICC) would focus on.

While China is accused of actions that would seem to meet the definition, the problem is gathering the evidence.

The burden of proof

Despite the assertions of the outgoing Trump administration, the situation in China is complicated by the lack of reputable, non-partisan, independent verification of human rights violations.

Furthermore, independent verification is easier said than done, especially given China’s footwork in international law, and the reluctance of other countries to criticise its human rights record.

That support for China has included allowing friendly countries to visit the disputed areas and report back reassuringly that there is no Uyghur problem.

In October last year, those countries also helped elect China for a new term on the UN Human Rights Council — effectively allowing Beijing to block the likeliest avenue for challenging its Uyghur policies.

Read more: Explainer: who are the Uyghurs and why is the Chinese government detaining them?

The second possible route, via the ICC, has also come to nothing because the court has refused to entertain the charge, on the grounds the alleged acts happened in China, which is not a signatory to the ICC.

Thirdly, the International Court of Justice is unlikely to resolve the dispute under the Genocide Convention; although China is a signatory, it has registered a “reservation” and “does not consider itself bound” by the relevant article.

Given these obstacles, what should New Zealand do? Rather than making pronouncements about genocide, the most effective response would involve trying to establish the substance of the US assertions, at the same time as giving China a chance to make its case and clear its name.

The independent experts pointed out that, unlike more than 120 other states, the Chinese government (which has signed most of the key human rights treaties) has not issued a standing invitation to independent UN experts to conduct official visits.

Read more: China must not shape the future of human rights at the UN

Rather, despite many requests over the past decade, China has permitted only five visits to investigate rights involving food, discrimination against women and girls, foreign debt, extreme poverty and older people.

New Zealand should strongly support, publicly and diplomatically, and help in any way it can, China becoming more transparent and improving its credibility on human rights. This would involve inviting independent observers with the status and mandate to monitor civil and political rights, roam freely and speak to anyone, and report what they find.

China may find such proposals challenging, but they are better than being accused of genocide. Not to accept a compromise will only amplify diplomatic, economic and military tensions with the US and its Five Eyes security allies.

Only independent assessment by mandated experts can prove China is compliant with its existing international commitments to protect the human rights of all its citizens — and, if so, whether the US assertion of genocide is wrong or right.