Australia’s COVID vaccine rollout will now begin in mid- to late February. Vaccination will commence with workers dealing with international arrivals or quarantine facilities, frontline health workers and those living in aged care or with a disability.

Prime Minister Scott Morrison said the government “optimistically” aims to vaccinate 80,000 Australians a week, and four million by the end of March.

The first vaccine doses were initially planned for March, but the rollout has now been brought forward, pending the Therapeutic Goods Administration’s approval of the Pfizer vaccine, anticipated by the end of January. Morrison said it would take a further two weeks for the first shipments of vaccine to arrive after that.

The government envisages delivering the vaccine via 1,000 distribution points, including general practitioners and possibly pharmacists.

Department of Health Secretary Brendan Murphy described the rollout as “the most complex logistical exercise in our country’s history”.

Read more: Should Australians be worried about waiting for a COVID vaccine when the UK has just approved Pfizer's?

If the government’s ultimate target is to still vaccinate a minimum 80% of Australians (widely viewed as the threshold for herd immunity) by October, time will be tight to give 21 million people the requisite two doses.

The biggest threat to this timetable will be continued COVID outbreaks that take up health workers’ valuable expertise and time.

Executing the plan to vaccinate frontline workers, the vulnerable and then everyone else, will require NASA-like logistics. Intact delivery of Pfizer’s vaccine famously requires transporters to buy dry ice in an effort to maintain an ultra-cold chain of -70℃. Each “shipper box” holds 975 vials, each containing five doses.

According to Pfizer, once opened, a box requires dry ice every five days, delivered within 60 seconds of lifting the lid, to maintain its temperature. From the first opening of a box, the full contents of 4,875 doses must be injected within 30 days.

The next challenge is to have the right number of recipients at each vaccination session, arriving at the right time. Each vial takes between 30 minutes and 2 hours to defrost at room temperature, or 2-3 hours at normal refrigeration temperatures of 2-8℃. Defrosted vials must be used within 84 hours. The vaccine must be diluted with sodium chloride and then injected within 6 hours.

Before receiving the vaccine, each person must be pre-screened to rule out serious adverse reactions, medications, food allergies or other medical indications that might preclude them from receiving the injection. Pfizer also requires patients to give informed consent, having been advised of any risks, however small, associated with the vaccine.

For the vaccine to be effective, each recipient needs a second dose at the correct interval, 21 days according to Pfizer and Moderna, and 28 days for AstraZeneca Oxford and the same vaccine for the first and second dose in accordance with the protocols.

Getting better with practice

Logistical lessons learned will presumably make the subsequent rollout of the Moderna and AstraZeneca vaccines potentially easier. We should certainly hope so, given the government’s target will necessitate vaccinating 21 million Australians within little more than 240 days. 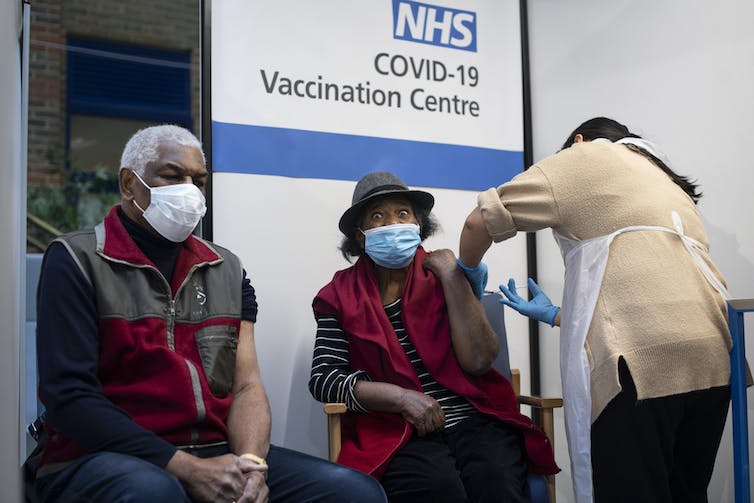 Britain has so far vaccinated around a million people, and still has a long way to go. Victoria Jones/AAP Image 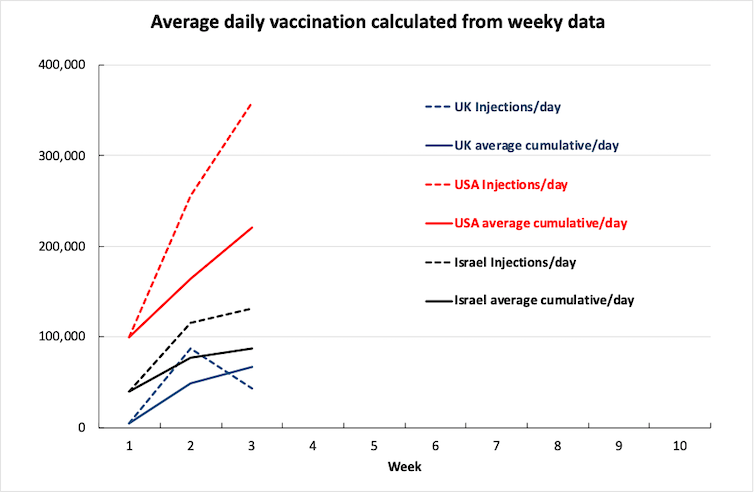 Vaccine rollouts in the UK, USA and Israel so far.

Australia has a longer time frame for hitting 80%, but a population three times the size of Israel’s. Overall, an average of about 170,000 injections per day will be needed to deliver the necessary 42 million doses to 21 million Australians over 245 days (March to October).

Extrapolating from Israel’s 325 injecting sites we would need more of them. The Australian government has identified 1,000 injecting sites. One recipient injected every 15 minutes seems to be the standard.

To achieve 80% injection coverage (two injections for 21 million people) every 15 minutes, would require each injecting site to have at least eight injectors per day, or 8,000 across the 1,000 distribution sites nationwide.

In Israel, the strategy of using the care network, called kupot cholim, enables local branches to manage 75% of their local rollout.

Australia’s government plans to use GPs and pharmacies as injecting sites. Staff at each location will need to be trained for the logistics about timing and keeping record of the type of vaccination each recipient receives.

How do we protect frontline workers?

Protecting frontline workers by vaccinating them first is understandable, although evidence currently available indicates vaccines prevent symptomatic and severe infection. We need to wait to see if they also prevent asymptomatic infection.

Addressing the weaknesses in the return traveller program to suppress the virus circulating is our main threat to the vaccination rollout; this would mean fewer community clusters and less time spent by health workers attending COVID cases and outbreak management. Indeed, Israel’s speed of vaccination may be derailed by its third wave necessitating a protracted lockdown.

To prevent the vaccination rollout from derailing we must also quickly eliminate or at least severely suppress the current outbreaks in Greater Sydney and Melbourne. Eliminating the current spread rapidly as possible will deprive the virus of hosts and protect everyone.

Read more: Vaccines alone won't keep Australia safe in 2021. Here's what else we need to do

Even with the best-laid plans, the vaccine rollout could still be derailed if resources are drained by having to respond to new COVID clusters.

Ultimately, success hinges not just on vaccine logistics but also on tightening the remaining weaknesses in our processes for quarantine and handling returned travellers. Removing the distraction of outbreaks will give us the best chance of getting enough people successfully vaccinated.