The opening dialogue of Edna the chatbot.

Additional findings testing looks for variants in patients’ genes that aren’t relevant to their current health, but may be later on. For example, it can reveal if someone has an above-average chance of developing a hereditary heart condition.

But these tests can have major implications for patients and their families. Thus, individuals deciding whether they want such a test need support — which Edna can provide.

This chatbot was developed by us and our colleagues at the CSIRO and other members of the Melbourne Genomics Health Alliance.

A range of medical conditions have underlying genetic causes. Historically, this has been tested with genetic testing, by looking at either a single gene or a panel of genes related to one particular condition.

In genomic testing, however, almost all the genes in a patient’s DNA are analysed using a biological sample (such as blood).

In Australia, genomic testing is done for patients with certain medical conditions, to provide more information about the condition and medical care required.

But genomic data can be analysed further in an additional findings test, to report on potential gene variants responsible for other preventable and/or treatable conditions.

Although available in the United States, additional findings tests are currently beyond immediate medical need in Australia and are only carried out in research settings. That said, conversations have started about them becoming mainstream here, too.

If additional findings tests were offered in Australia, genetic counsellors would have to spend a large proportion of their time helping patients decide whether they want one. This is where chatbots come in.

Edna the chatbot in training

For chatbots to accurately recognise human speech and provide a meaningful response, their “brain” needs to draw on a large body of data.

Many chatbot brains are developed from open source data, but this is inadequate for highly specialised fields. We developed Edna by analysing transcripts of actual counselling sessions that discussed additional findings analysis.

Edna can emulate the flow of a real patient-counsellor session, explaining various conditions, terms, concepts and the key factors patients should consider when making their decision.

For example, it prompts them to consider the personal and familial implications of undergoing an additional findings analysis. As we all share genes with our family, results from genomic testing can lead to serious conversations. 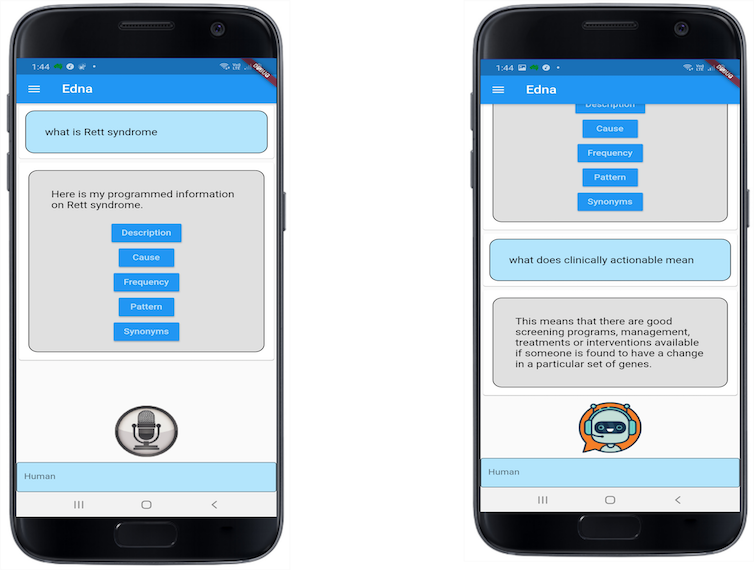 Edna has several other capabilities, such as: 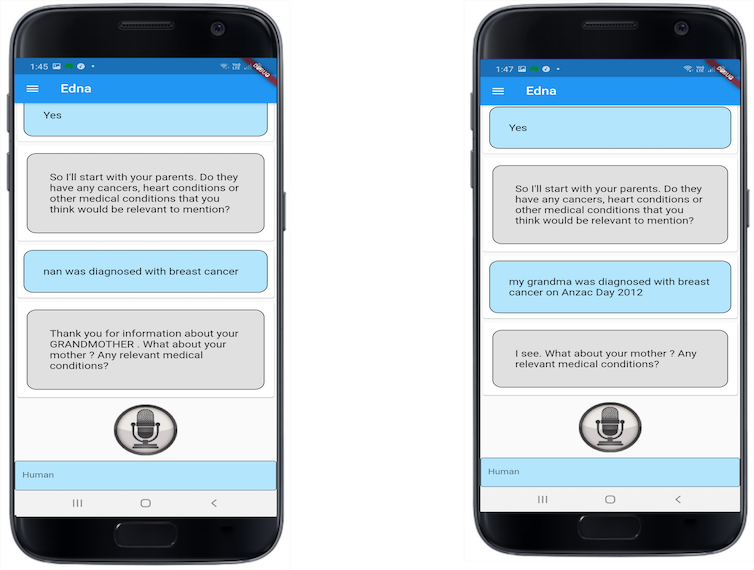 Edna asks about the medical conditions of a patient’s family members.

Edna is currently undergoing a feasibility trial with patients who have already had additional findings analysis done in a research setting, as well as genetic counsellors and students.

The Eliza Effect and other hurdles

Past research has suggested people prefer chatbots that interact with empathy and sympathy, rather than unemotionally giving advice. This is called the “Eliza effect” — named after the first ever chatbot. Eliza was able to elicit an emotional response from humans.

Edna is quite advanced on this front. It can detect negative sentiment and even some forms of sarcasm. Still, this isn’t the same as true empathy.

Edna can identify when a user likely needs to be connected to a real counsellor.

Since Edna provides generic information, it can’t discuss the implications of a future or previous genomic test for a specific patient. It also can’t link the patient with a support group, or provide expert medical advice.

Still, Edna represents a significant move towards a digital health solution that could take some pressure off genetic counsellors.

Read more: The future of chatbots is more than just small-talk

Edna’s main advantage is accessibility. It can support people living remotely, or who are otherwise unable to attend face-to-face genetic counselling.

It can also be accessed at a patient’s home, where family members may be present. They can then share in the information provided and engage Edna themselves, potentially improving the chances of an accurate history capture.

As a digital interface, Edna is almost endlessly modifiable. It can be updated continuously with data compiled during interactions with patients — whether this be information on new topics, or a new way to respond to a question.

A larger-scale patient trial is planned for the near future.