Five food-delivery cyclists have died on Australian roads in the past three months, four in Sydney. Most commentary has focused on the harsh employment conditions that force people to take risks they shouldn’t have to. These problems should of course be fixed, but cycling in general is too dangerous in our cities.

Read more: Three Charts on the rise in cycling injuries and deaths in Australia

We need to look not just at labour laws but at the laws that shape our streets: things like road rules, planning requirements and engineering standards. Food delivery is a compelling example because it shows cycling is the most efficient way to get around the city.

Despite the efforts of supposedly business-minded people like shock jock Alan Jones and New South Wales’ former roads minister, Duncan Gay (who infamously ripped up infrastructure including a cycleway along College Road in central Sydney and a rainbow crossing on Oxford Street in Surry Hills), businesses have worked out bikes are the best way to move around the city.

Bikes are fastest for distances up to 5km, even for beginners. For more experienced cyclists and during peak hour, bikes are faster for trips of 10km and often even more.

Cycling has wider benefits too. Swapping cars for bikes can reduce the tens of billions of dollars lost in traffic congestion, the many gigatonnes of greenhouse gas emissions and the health impacts of sedentary lifestyles. Even after accidents are taken into account, the health benefits of cycling far outweigh the costs.

Read more: Cycle, walk, drive or train? Weighing up the healthiest (and safest) ways to get around the city

Cycling can also help to improve equity and social inclusion, since the burdens of car-centric development are suffered most by people who are already vulnerable. They include the largely migrant food-delivery workforce. 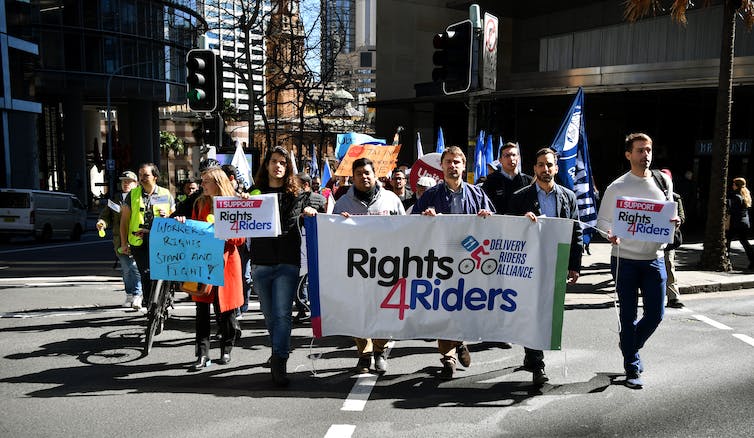 Food delivery riders are doubly vulnerable because of their working conditions and the risks of cycling in our cities. Joel Carrett/AAP

Food-delivery cyclists are not the only people dying in car crashes. Worldwide, traffic accidents cause more than 1.35 million deaths every year and are the leading killer of children.

Instead of focusing on the dangers created by cars and trucks, however, NSW Transport and Roads Minister Andrew Constance this week blamed the victim:

If people are riding around, particularly at night, they have an obligation to make sure they are wearing high-visibility jackets. They’ve obviously got to have the requisite lighting in terms of the bike. They themselves should obviously be putting protective and high-vis clothes on. 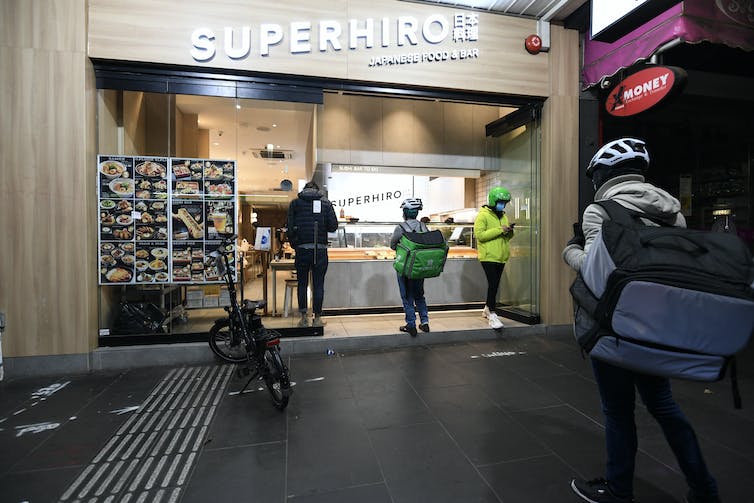 Despite our heavy reliance on their services during the pandemic, much of the media coverage of delivery riders has been negative. Erik Anderson/AAP

Fears about cyclists injuring pedestrians receive a lot of attention, yet car driving kills three times more people per kilometre than cycling. The danger created by trucks is more than ten times greater per kilometre (and vastly greater overall).

Rules give priority to cars

Of course, we have all seen cyclists doing risky things. But the issue is less about individual behaviour and more about the regulatory environment. In Sydney and many other places, a plethora of state and federal rules and regulations give priority to cars in our cities.

Planning rules entrench the dominance of cars by mandating the provision of car parking (despite its significant impact on housing affordability). Engineering standards support high-speed travel.

Road rules and policing practices also enforce the dominance of cars on streets. An example is penalising pedestrians who step onto or cross the road within 20 metres of a zebra crossing. In contrast, sanctions for dangerous driving are weak and poorly enforced, and cycling is left out of driver education.

Infrastructure is a problem too

Read more: Cycling and walking can help drive Australia's recovery – but not with less than 2% of transport budgets

The challenge is particularly acute in older areas, where streets were not designed for high car use. Calls for bike lanes, widened footpaths and other infrastructure for pedestrians and cyclists are often refused on the grounds of lack of space. But why do cars get what little space there is?

The site of Sunday’s death is a clear example. The intersection where the cyclist was killed by an excavator-carrying truck is not a highway but a relatively narrow street with houses and a school. Should large trucks really be driving on streets like this? 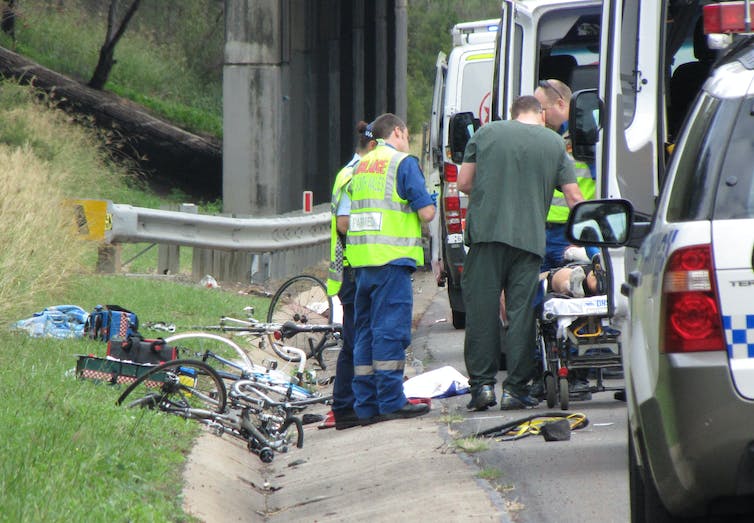 The greatest dangers on our roads are posed not by cyclists but by trucks and cars. Matt Black Productions/AAP

Read more: Physical distancing is here for a while – over 100 experts call for more safe walking and cycling space

Internationally, there is a growing recognition that legal reform is needed to improve safety, and in turn to achieve both individual and national benefits. The Dutch approach has long been celebrated, both for the high quality of cycling infrastructure and the high level of liability for car drivers. The Swedish Vision Zero has also been influential, with cities around the world introducing laws and policies to eliminate deaths in traffic.

Read more: Cars overwhelmingly cause bike collisions, and the law should reflect that

Even in the US, where car culture is deeply entrenched, many cities are adopting complete streets legislation. These laws require streets to be planned, designed, operated and maintained to enable safe, convenient and comfortable access for users of all ages and abilities, regardless of their transport mode.

In Australia, councils like the City of Sydney are taking very positive actions to support cycling, but this alone is not enough. To save the lives of delivery riders – and everyone else – we need legal reforms at the state and federal levels.