In his first overseas trip since the COVID-19 pandemic, Prime Minister Scott Morrison has finally concluded a Reciprocal Access Agreement (RAA) with Japan. Australia is only the second country in 60 years to reach such an arrangement with Japan’s Self-Defence Forces (SDF).

By undertaking his 24-hour visit to Tokyo, Morrison became the first foreign leader to personally meet Prime Minister Yoshihide Suga in Japan. That Morrison made such an effort, which will require two weeks of quarantine upon his return, shows how important the strategic partnership between the two countries has become.

Morrison was scheduled to visit Papua New Guinea on the return trip. He was forced to cancel due to PNG’s latest political crisis, which has destabilised the government of Australia’s largest Pacific neighbour.

Morrison was also the first foreign leader to call and congratulate Suga when he succeeded Shinzo Abe in September.

The prime ministers then held online meetings prior to this visit. This included the ASEAN-related series of virtual summits, which concluded last weekend with the online signing of the Regional Comprehensive Economic Partnership (RCEP) trade agreement.

Read more: We've just signed the world's biggest trade deal, but what exactly is the RCEP?

Morrison’s visit was presaged by ministerial visits to Tokyo last month. Foreign Minister Marise Payne came for the second foreign ministers’ summit of the Quadrilateral Security Dialogue between Japan, the United States, Australia and India. This meeting also approved Australia’s participation in the Malabar naval exercises held by India after a 13-year hiatus.

Defence Minister Linda Reynolds then met Suga’s new defence minister, Shinzo Abe’s younger brother Nobuo Kishi. This was important preparation for the Reciprocal Access Agreement, as Japan agreed the Australian Defence Forces (ADF) could come under the protection of Japan’s SDF. This is part of the collective self-defence legislation passed by the Abe government in 2015. Australia is the only country after the United States to be so covered.

Read more: Yoshihide Suga – who is the man set to be Japan's next prime minister?

Morrison’s latest trip to Japan, the second after the G20 Osaka summit last year, continues the now well-established practice of annual reciprocal visits between Australian and Japanese prime ministers. These leadership summits have incrementally upgraded the level of co-operation between the ADF and SDF, formally approving security pacts such as the 2007 Joint Declaration on Security Cooperation and the 2010 Access and Cross-Servicing Agreement, which was revised in 2017.

Morrison has invited Suga for his first official prime ministerial visit to Australia next year, to formally sign the RAA.

The ADF and SDF have co-operated in peacekeeping since the 1990s. The SDF also regularly participates in military exercises in Australia, such as Kakadu and Talisman Sabre, and in joint naval patrols in the South China Sea.

Since 2018, the airforce has been conducting surveillance flights from Japanese bases to enforce sanctions against North Korea. It also undertook air combat training exercises at Hokkaido in 2019. By authorising an even higher level of integrated operational capability, the RAA will now allow ADF units to be stationed in Japan, and the SDF in Australia.

Japan has had a Status of Forces Agreement with the US since 1960. It has long caused friction among local Japanese communities over the burdens of the US military presence, particularly in Okinawa, where most US forces in Japan are based.

Negotiations for the RAA have dragged out for six years. The sticking point was potential application of the death penalty to ADF personnel if they commit capital crimes while off duty in Japan. It is still unclear whether the jurisdiction of Japanese law will apply, with only a commitment from both sides to address such issues on a case-by-case basis.

From the Japanese perspective, there may also be concerns over co-operating with the ADF in potential combat situations, after the investigation into alleged war crimes committed by ADF Special Forces in Afghanistan.

Despite any such misgivings, ratification of the RAA by Japan should proceed fairly smoothly, given the ruling Liberal Democratic Party’s majority in both houses of the Diet. However, the opposition Constitutional Democratic Party and the Japanese Communist Party are still likely to raise concerns over whether the RAA undermines the pacifist ideals of Article 9 of the Japanese constitution. 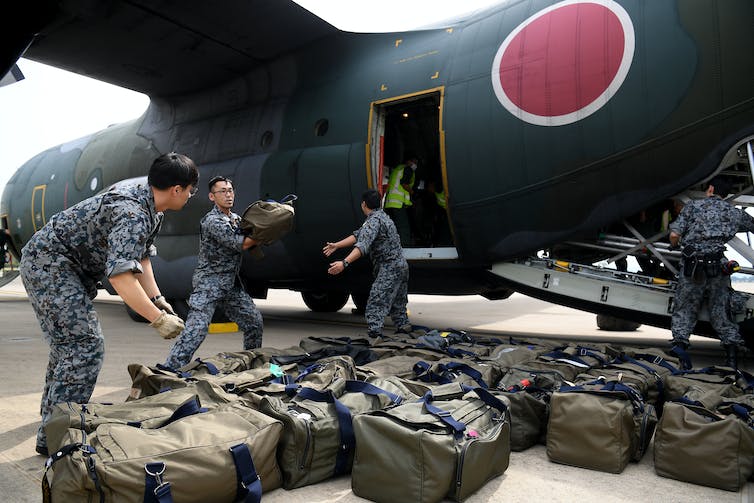 On other matters raised by Morrison’s visit, establishing a pre-vaccine “travel bubble” with Australia now seems unlikely. This is due to a recent spike in coronavirus cases in Japan.

Australians stranded in Japan because of Australia’s strict pandemic travel restrictions also hope more efforts will be made to help them return home.

Japan has long been Australia’s second-largest trading partner, so there were hopes it might pick up some of the slack for the loss of Chinese export markets. 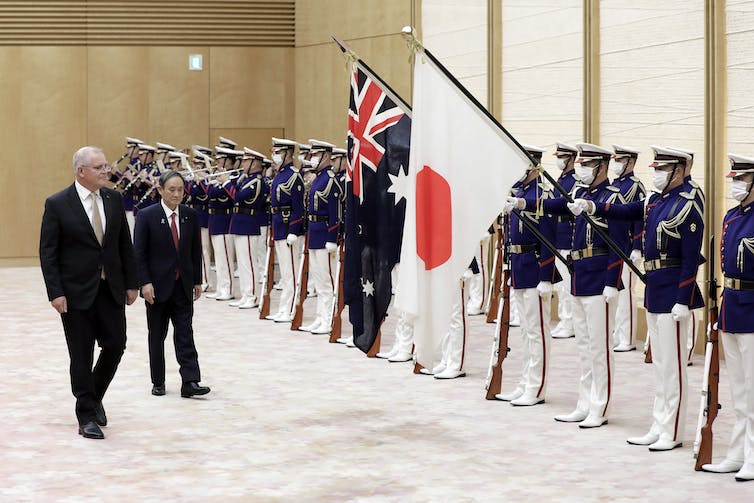 Australia hoped Japan might pick up some of the loss of Chinese export markets. AAP/EPA/Kiyoshi Ota /pool

Ammonia-based fuel exports could have even more long-term potential. However, it will be a challenge to crack the emerging Japanese renewables market, which is likely to be primarily domestically supplied through wind and solar power.

The intensification of the Australia-Japan alliance is a further development of the “minilateral” approach by Indo-Pacific middle powers to improve their security ties. This in turn helps resist rising Chinese hegemony.

It is also a reflection that their US alliance partner has become less reliable, wrought with its internal divisions and political turmoil.

In his first call with President-elect Joe Biden, Suga reconfirmed the defence of Japan under the US-Japan Security Treaty covers the Senkaku Islands (claimed as the Diaoyu Islands by China).

Morrison has not yet made a similar commitment, but could be pressed to do so, given this latest deepening of the defence relationship.

In this time of geopolitical flux, Japan and Australia have taken another step closer towards a formal military alliance.