The Commonwealth and state governments are responsible for keeping people safe, and the role of the ADF is to protect the nation. But how these two roles fit together is not always so clear.

After a tumultuous year of bushfires and the ongoing pandemic, we need a more fundamental conversation about the role of the ADF in responding to domestic emergencies.

The Morrison government has introduced a new bill that would give the ADF more power to respond to emergencies. And a Senate committee has recommended it be “passed without delay”, despite dissent from the Greens.

But questions remain around whether the legislation is even necessary or meets all the recommendations set out in the Bushfire Royal Commission report.

Read more: In the war against coronavirus, we need the military to play a much bigger role

When the Commonwealth can use the ADF domestically

The scope of the Commonwealth’s “nationhood power” is not settled in constitutional law and so, despite the number of times the ADF has been called out in peacetime, the legal basis of these interventions has always been contested. Section 119 of the Constitution says:

The Commonwealth shall protect every state against invasion and, on the application of the executive government of the state, against domestic violence.

It is generally agreed this does not authorise unilateral military action by the Commonwealth government. The need for this section is due to the fact the states are unable to raise a military force themselves.

But the Commonwealth has radically expanded how the call-out power is used — first in preparation for the 2000 Sydney Olympics, and then in response to the Sydney Lindt Cafe siege in 2018. 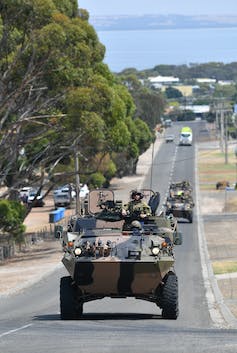 A convoy of Army vehicles transporting more than 100 Army reservists and supplies on Kangaroo Island during this year’s bushfires. DAVID MARIUZ/AAP

A bill was passed in 2018, for example, that authorised the use of ADF soldiers to protect Commonwealth interests in Australia and offshore from “domestic violence” if a state requested it.

This bill raised significant concerns over human rights, related to the definition of “domestic violence” and whether ADF or foreign troops would be held accountable for the use of deadly force against civilians.

What does the new bill do?

The new bill would streamline the use of military personnel in a severe natural disaster or emergencies, such as a pandemic. But questions about the parameters of ADF involvement remain unanswered.

For example, the states and territories currently need to ask the Commonwealth for ADF personnel or assets to be deployed and must consent to ADF support during emergencies.

The Bushfire Royal Commission recommends allowing the Commonwealth the power to declare a national natural disaster and get ADF personnel ready to respond. If there are significant risks to lives or property — or it is deemed in the national interest — the government may then deploy the ADF to those areas without state or territory consent. 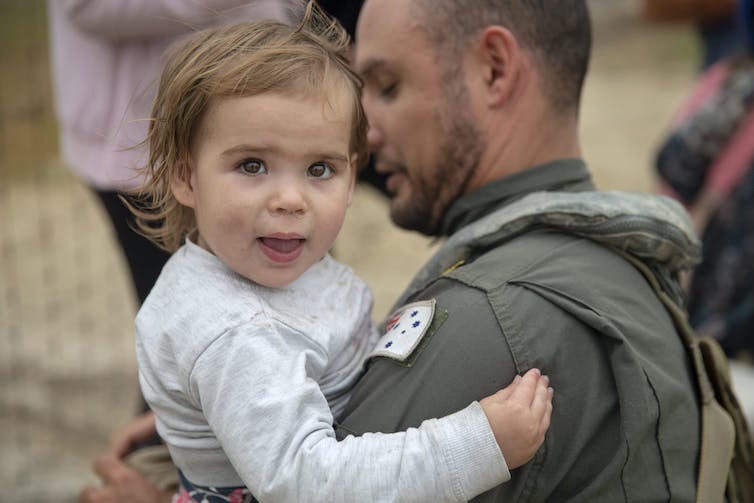 A child is helped onto an ADF helicopter as Mallacoota is evacuated this year. Corporal Nicole Dorrett/Australian Department of Defence

This may raise future questions about the scope of the Commonwealth’s call-out powers, as noted in the bills digest and by Professor Anne Twomey’s submission.

Under the legislation, ADF personnel and soldiers from foreign countries would also have immunity from civil and criminal liability when responding to disasters, similar to state and territory emergency services workers.

What else does the Bushfire Royal Commission report say?

The royal commission focused mainly on ways to improve coordination between federal, state and local fire and emergency service agencies in future bushfires.

The commission’s report identified the need for more clarity from state, territory and local governments about how their fire and emergency responders should interact with ADF personnel on the ground, and what they can expect from the ADF in terms of performing certain tasks.

There are many ways the ADF can help states during an emergency, such as logistics support (including both fixed and rotary wing aircraft), sealift (such as the Mallacoota beach evacuation), land transport, engineering and medical support, the building of temporary accommodation and helping to restore communications.

During this year’s bushfires, for instance, the ADF deployed some 8,000 personnel, including 2,500 reservists, to assist with rescue operations and medical and disaster relief. About 500 defence personnel from New Zealand, Papua New Guinea, Japan and Fiji also provided assistance. 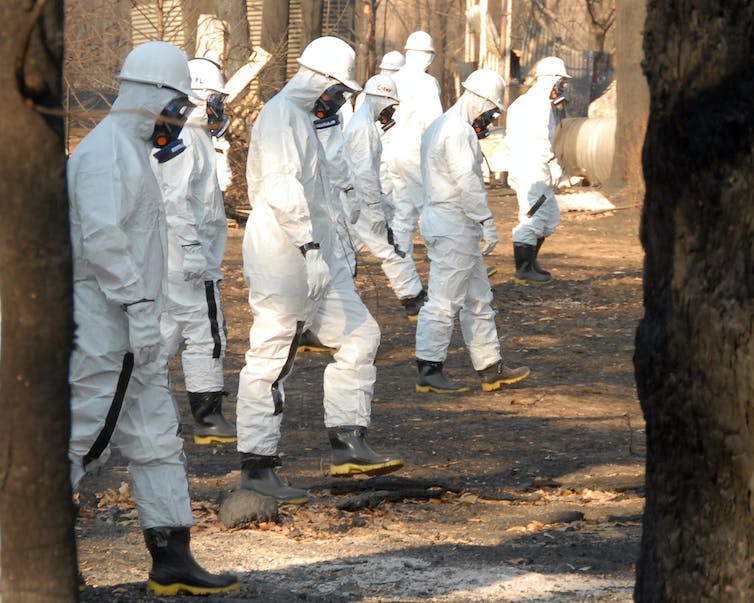 However, the ADF insists it will not directly fight bushfires. There has also been some reluctance to commit more resources to domestic emergencies, arguing this reduces its focus on preparing for conflict and could reveal its capabilities to potential enemies. Using the ADF is extremely expensive, as well.

Calling in reserves instead of permanent ADF staff would mitigate some of these issues. Reservists have training and can provide personnel support with some specialist skills.

Also, it is easier to compensate and insure reservists, rather than the complicated (and sometimes contested) arrangements around compensation for volunteers and their employers.

Read more: The bushfire royal commission has made a clarion call for change. Now we need politics to follow

The royal commission found more employment protection and accessible compensation would be required to ensure volunteer firefighters are not “worse off” than ADF personnel or reservists.

There was also some uncertainty in the report about the “thresholds” that must be met before seeking the assistance of the ADF — as in, when a locality has exhausted all government, community and commercial options and needs ADF support.

The Commonwealth government says it is working to clarify this.

The future of the ADF as a ‘dual use’ force

Changes are clearly needed to the ways in which we respond to disasters because, as the report makes clear, they are only going to get worse.

As I’ve argued with colleagues elsewhere, the ADF should become a “dual use” force that should respond to natural disasters both here and in the region.

In order to justify our current level of military spending at 2% of GDP, the ADF should be trained and ready to deal with the increasing risks associated with climate change, such as handling mass displacement and responding to natural disasters.

Defence should earn their keep. But these interventions should come with strict civilian controls, human rights standards and clarity about roles. The current legislation creates more uncertainty about the ADF’s role in disasters and emergencies, when what the community needs now is clarity.