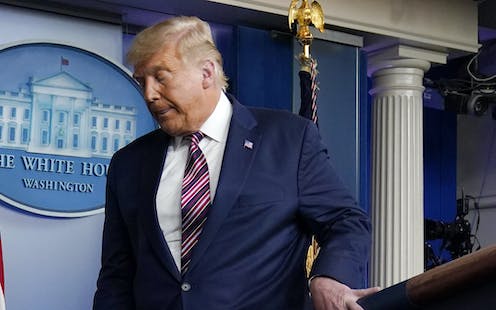 In the United States, democratic norms are breaking down.

The president, Donald Trump, baselessly claimed at a White House press conference on Friday morning, Australian time, that the presidential election has been stolen from him by fraudulent and corrupt electoral processes.

This confronted the television networks, whose job is to...

In the United States, democratic norms are breaking down.

The president, Donald Trump, baselessly claimed at a White House press conference on Friday morning, Australian time, that the presidential election has been stolen from him by fraudulent and corrupt electoral processes.

This confronted the television networks, whose job is to report the news, with an acute dilemma.

In an already volatile political atmosphere, do they go on reporting these lies, laced with an undertone of veiled incitement to violence? Or do they cut away on the grounds that by continuing to broadcast this stuff, they are helping to propagate lies and perhaps to oxygenate a threat to the civil peace?

Many of the major networks — MSNBC, NBC News, CNBC, CBS News and ABC News — decided to cut away. So did National Public Radio.

It was not rooted in reality and at this point, where our country is, it’s dangerous.

CNBC presenter, Shepard Smith, said the network was not going to allow it to keep going because what Trump was saying was not true.

CNN and Rupert Murdoch’s Fox News broadcast Trump’s entire press conference but immediately afterwards challenged what he said. CNN’s fact-checker Daniel Dale said it had been the most “dishonest” speech Trump had ever given, with anchor Jake Tapper saying Trump’s statements were “pathetic” and “a feast of falsehoods”.

Fox’s host Martha MacCallum said the supposed evidence and proof of election misconduct would need to be produced.

Even Murdoch’s New York Post, which had endorsed Trump’s re-election, accused him of making “baseless” election fraud claims, quoting a Republican Congressman as saying they were “insane”.

A serious decision to silence the President

But what of the networks’ decision to cut away?

Silencing a public official in the course of his official duties is a very serious abrogation of the media’s duty in a democracy.

But so is allowing the airwaves to be used in such a way as to arouse fears for public confidence in the democratic process and — as MSNBC’s Williams argued — even public safety. 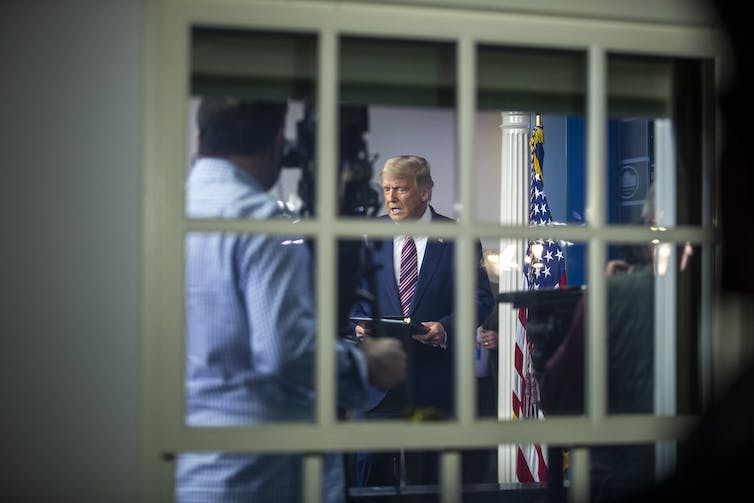 On the run, many of the big networks prioritised public confidence in the democratic process, and public safety, over the reporting of the president’s words.

It is a rare circumstance in any democratic society that the media are placed in the position of having to shoulder such a heavy burden of responsibility.

It is most unlikely that once the present crisis is over, assuming Democrat candidate Joe Biden wins, the American media will find themselves in this position again.

Even so, a Rubicon has been crossed. A president of the United States, a publicly elected official, has been silenced by significant elements of the professional mass media in the course of his public duties.

This was done principally on the grounds he was lying to the people in circumstances where there was a foreseeable risk of serious harm to the body politic, and there was no practicable way to reduce the risk.

Is that a standard the media is prepared to set for the future? If so, it would be giving itself a power that goes well beyond anything the media has claimed for itself up till now.

Journalists need to keep their nerve

In considering this, two questions arise.

What if all media outlets had adopted this course? No one except those at the White House press conference would have known the whole of what Trump said, seen the context and observed the demeanour with which he said it.

Would it have been enough to do as CNN and Fox did — report the speech and then repudiate it?

Read more: 5 types of misinformation to watch out for while ballots are being counted – and after

An answer to that would be: the lies were coming so thick and fast, and were so damaging to the public interest, that it would have been impossible to set the record straight in anything like real time.

Real-time fact-checking is a relatively new development, and a welcome one. But its feasibility should not be a criterion for deciding whether to publish breaking news, unless there is doubt about whether the breaking news is actually happening.

The networks that cut away doubtless acted in good faith to do right by the country. Trump’s speech was shocking and irresponsible. 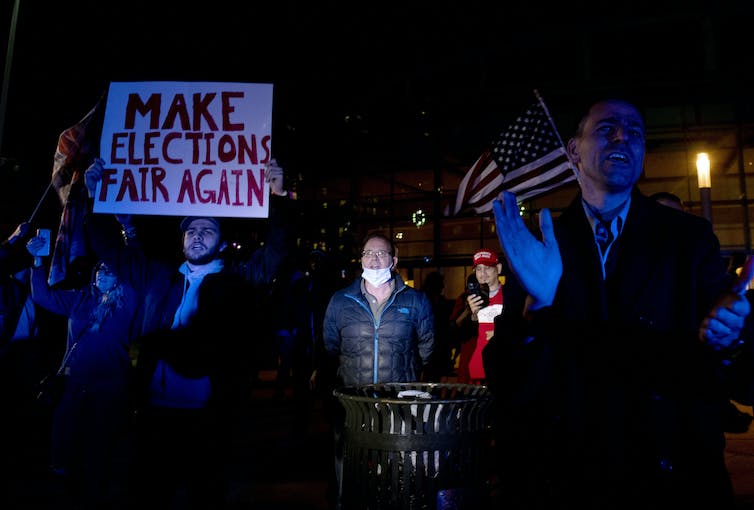 Trump supporters have taken to the streets since the polls closed on November 3. Nicole Hester/AP

However, American democracy is in crisis. At this time, above all, the public needs the institution of the fourth estate to keep its nerve and a clear head.

A primary norm of journalism is to inform the public. That certainly means being fair and accurate. But if the news contains lies, the norm is to publish and then call out the lying and set the record straight as soon as possible.

The networks need to explain to their audiences their reasoning behind the decision to cut away, and the media as a whole need to realise that if the norms of journalism break down, that just adds to the tragic chaos into which their country has descended.