This year marks a decade since the end of the Millennium Drought, when flood waters reached the mouth of the River Murray in 2010. For 1,200 days prior, Australia’s most iconic river had ceased flowing to the sea, causing populations of fish and other aquatic animals to plummet.

In particular, native migratory fish, including congolli (Pseudaphritis urvilli) and pouched lamprey (Geotria australis), were severely impacted by barriers to migration — such as barrages and weirs — and a lack of river flow.

However, our research has shown some clever engineering and increasing volumes of water for the environment are helping congolli and pouched lamprey to bounce back in record numbers.

With native fish in the Murray-Darling Basin just a fraction of what they were before European colonisation, rebuilding populations will be a long process. But learning from successes like this along the way will aid in the journey toward a healthier river. 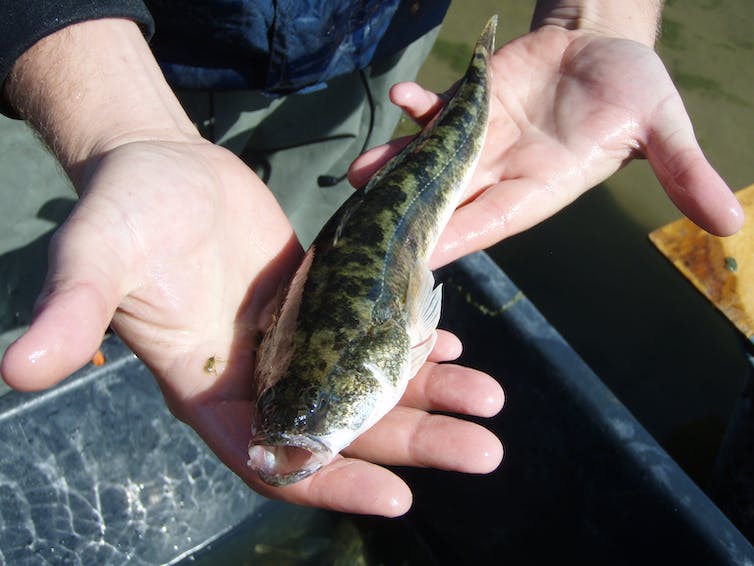 An adult female congolli. These fish will spend 3-4 years in the River Murray before returning to the ocean to spawn. Brenton Zampatti, Author provided

What happened to fish in the Millennium Drought?

From 2001 to 2009, south-eastern Australia experienced the most severe drought in recorded history.

Unprecedented low rainfall and water extraction for irrigation and human consumption reduced water flows in the lower Murray by around 70%. Water levels in the Lower Lakes at the terminus of the river system fell to more than one metre below sea level.

To prevent saltwater from the ocean mixing with critical storages of freshwater, tidal barrages (dam-like structures) were closed, and the River Murray was disconnected from the sea.

This was a big problem for a number of migratory species, including pouched lamprey and congolli, which need to migrate between freshwater and saltwater to complete their lifecycles.

During the Millennium Drought, no lamprey were seen in the Lower Lakes and Coorong, while numbers of juvenile congolli declined. After more than three years of barrage closure, local populations were threatened with extinction.

But in late 2010, both species were saved by major flooding, when the Murray once again flowed to the sea, and abundances have continued to steadily improve over the past decade.

Several management initiatives were also critical in supporting recovery, even through the most recent drought. Notably, the installation of fish ladders and better water management. Fish ladders are water-filled channels with a series of steps that enable fish to swim around or over dams and weirs. 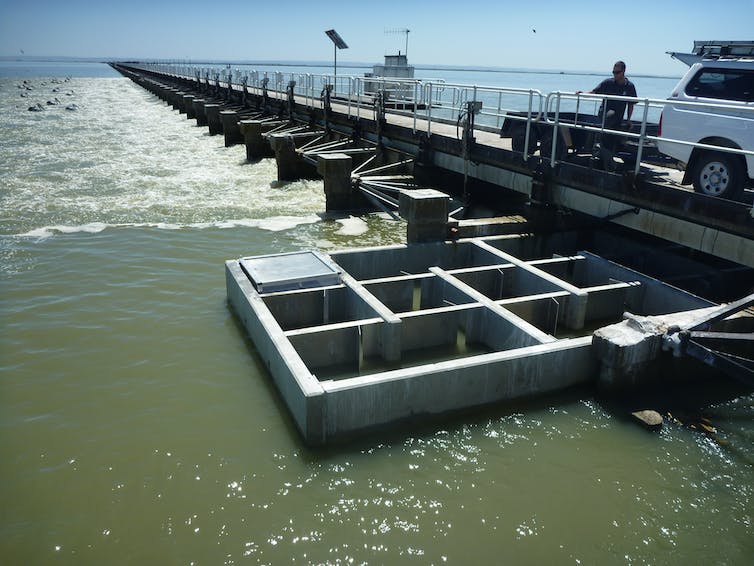 A fish ladder on the Murray Barrages. Fish swim through this structure to move from the estuary. into the freshwater lakes and River Murray. Without fish ladders, fish are seldom able to move past the barrages. Brenton Zampatti, Author provided

Native fish populations in the Murray-Darling Basin are estimated to be approximately 10% of those pre-European settlement. Barriers to fish movement and altered river flows are two principal causes of decline.

The Murray Barrages were constructed in the 1930s, without consideration of fish passage, and it was 70 years before the first fish ladder was constructed in 2003.

Read more: A good plan to help Darling River fish recover exists, so let's get on with it

In 2020, there are now 11 fish ladders spread across the Murray Barrages, and our research has shown they effectively support vital migrations.

More fish ladders have been built on upstream weirs, together opening more than 2,000 kilometres of the River Murray to fish migration.

However, water must be available to operate the fish ladders, and this is where environmental water plays a role.

In 2009-10, approximately 120 gigalitres of environmental water were delivered across the Basin. By 2017-18, this volume was greater than 1,200 gigalitres and included substantial volumes across the Murray Barrages.

This increase has enabled the River Murray to continuously flow to the sea, restoring its natural characteristics, albeit at a significantly reduced volume.

What’s more, water for the environment has supported constant operation of the barrage fish ladders since 2010 — a huge win for lamprey and congolli.

From the lows of the Millennium Drought we have so far this year caught a record 101 individual pouched lamprey moving through the barrage fish ladders and proceeding upstream. This is up from last year’s catch of 61 fish. 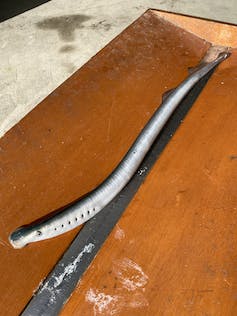 Congolli is now one of the most abundant fish in the Coorong and upstream of the barrages in the Lower Lakes.

What the rest of the basin can learn from this

Fish ladders and environmental water have been successful in supporting fish migration at the Murray Barrages, yet across the Murray-Darling Basin, thousands of barriers remain and more are being considered, particularly in the northern Basin.

These barriers can impede the movements of fish that migrate wholly within freshwater, such as golden perch (Macquaria ambigua) and the threatened silver perch (Bidyanus bidyanus). This includes the spawning migrations of adults and downstream dispersal of juveniles. 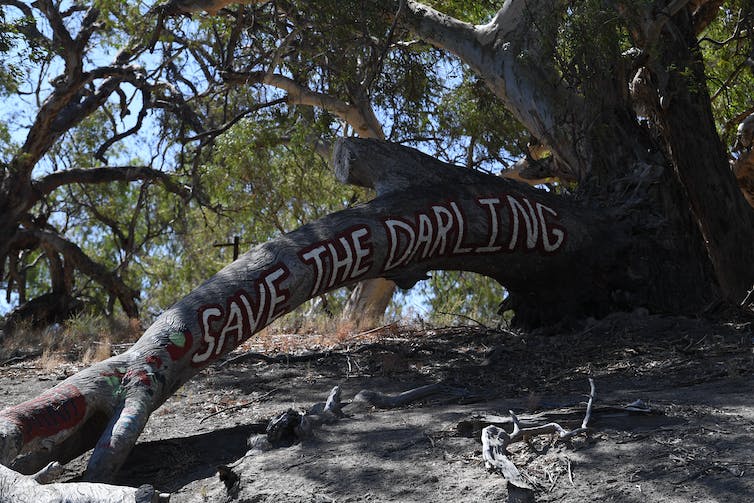 Across the Murray-Darling Basin, fish populations are just 10% of what they were before colonisation. AAP Image/Dean Lewins

Mitigating the impacts of existing and new structures on the movement of fish is crucial to restoring native fish populations in the Murray-Darling Basin.

To help restore migratory fish throughout the basin, there must be greater understanding of the movement requirements of all fish life stages, the construction of effective fish ladders, and river flows must be sufficient to facilitate downstream movement, including of eggs and larval fish. The removal of barriers may also be a feasible option.

In any case, after 15 years of experience in the lower River Murray we’ve learnt protecting migratory fish is best achieved when researchers, the community, water managers and river operators collaborate closely. Such partnerships are the bedrock to establishing a healthier river.