Just about every pollster and pundit in the United States predicts Joe Biden will prevail in the popular vote on November 3. Current polling puts the Democrat candidate somewhere between seven and eight points ahead.

For context, Hillary Clinton won the popular vote by 2% in 2016. If the polls are accurate, there is next to no chance that Donald Trump can win in 2020. He would need to close the gap to within 5%, likely under 4%.

The role of the Electoral College is crucial, however. George W. Bush’s victory in 2000 and Trump’s in 2016 demonstrated a central fact of American presidential elections: they are indirect. The popular vote does not determine the outcome.

Al Gore and Hillary Clinton know this stark political truth all too well. Despite outpolling their opponents, neither won the presidency. To become president, a candidate must garner a majority of electoral college votes, the total of which is equal to the full membership of the House and Senate. In 2020 the magic number is 270.

So, could there be a second upset? What might we watch to get an early clue of the outcome?

Firstly, the Republicans would have to close strongly. Trump has narrowed the gap in the most recent polling cycles. And he has barnstormed the battleground states until the last moment.

But in the COVID age, voting by mail may have changed the dynamic significantly. A record number of Americans have already voted, and nothing anyone can do will alter those votes cast. 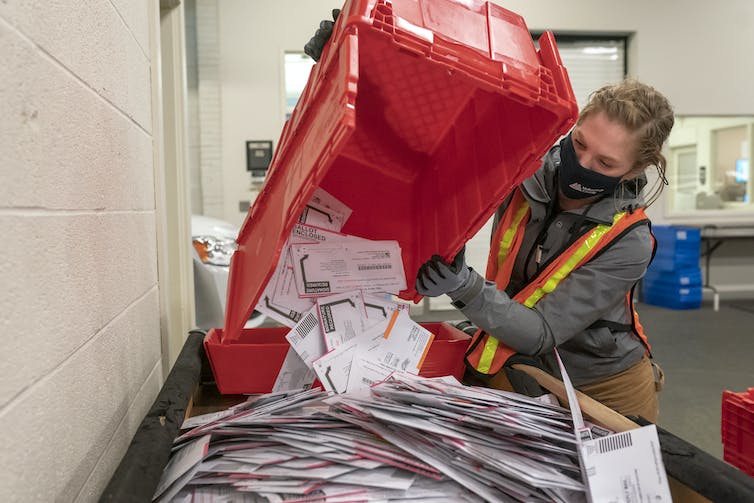 Early voting: a US postal worker sorts ballots ahead of the election day deadline. GettyImages

The Trump-Pence ticket claims to have made inroads into Black and Hispanic voting blocs. The Republicans could score significant gains with males, too. Ironically, they could close the popular vote gap by polling better in California, New Jersey and New York but still accrue no advantage. Gaining minority support in blue states offers no improvement to the Republican electoral map.

By contrast, pollsters predict Biden winning the Electoral College vote along with a decisive majority of the popular vote.

Presumably he will win the states Clinton won in 2016. Beyond that he only has to flip (or hold, with 2016 being the outlier) the “blue wall” of Midwestern states: Pennsylvania, Michigan, Minnesota, and Wisconsin. Biden is from Scranton, Pennsylvania. Unlike Clinton, he has campaigned heavily in these states. 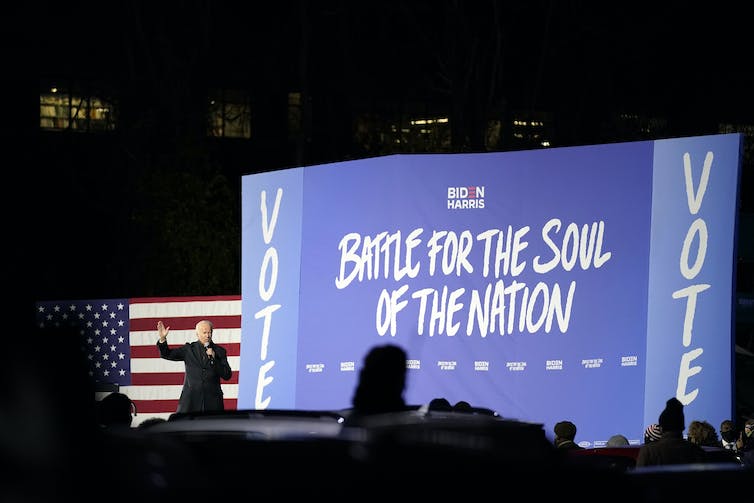 Democratic presidential candidate and former vice president Joe Biden at a drive-in rally in Pittsburgh near the end of the campaign. AAP

The states to watch

For all of us watching halfway across the world, look out for these early indicators of an upset — if one is in the offing.

Florida: Trump must win here, Texas and the rest of the South. Florida will be an early indicator. If early returns show Trump well ahead, if he’s polling well with Latinos and African Americans, if returns in Miami-Dade County are below predictions — then the Republicans prevail in the Sunshine State. A Trump re-election becomes possible, if still unlikely.

North Carolina (and Georgia): Trump must win the South. If early returns have Trump clearly ahead in Florida, then it’s very likely that he carries North Carolina and holds the South. Bonus: the senate race between the popular Democrat Cal Cunningham and incumbent Thom Tillis might be suggestive. If Tillis is winning handily, it’s likely Trump is stronger than pollsters had predicted. A Democratic Senate becomes less likely.

Pennsylvania: Biden is from Pennsylvania and the Democrats have hugely outspent Trump in the Keystone State (85% of more than US$700 million spent on TV ads has gone to Pennsylvania broadcasters and to those in the other big five swing states).

The Democrats will lose many of the rural counties, so they must poll well in Philadelphia, its suburbs and in Pittsburgh. Early returns from Philadelphia must be overwhelmingly Democratic. If the Democratic majority is less than expected or fewer turn up to vote, then Pennsylvania is very much in play.

Biden may have upset some voters for his comments in the final presidential debate about opposing fracking or drilling for oil on federal land. The oil industry remains a key economic factor in Pennsylvania politics.

Michigan and Minnesota: Here the down-ticket Michigan race might trump the presidential returns. A key early indicator would be the battle for the senate between Gary Peters and the Republican John James. The latter is popular but Peters has consistently polled at least five points ahead of his opponent.

If that race is tight, if James is close, then Michigan would be in play for Trump. Popular sentiment against COVID lockdowns and protests over the police killing of George Floyd might be greater than people were willing to confess to pollsters, with far-reaching implications for the returns on the night. A similar dynamic could be seen in Minnesota. 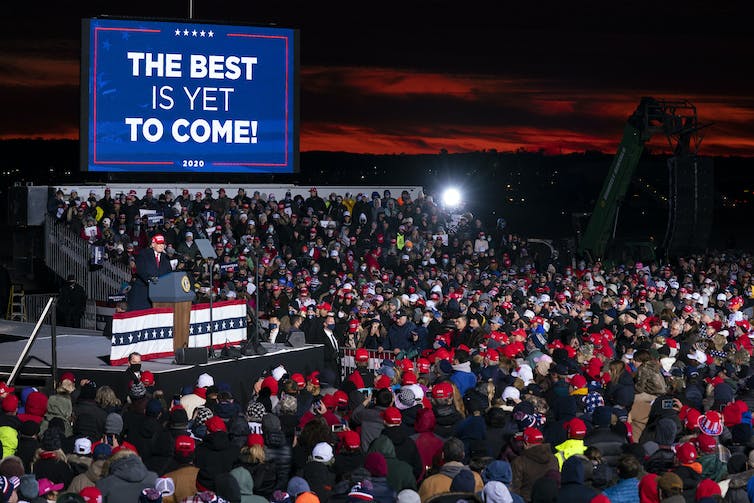 Donald Trump at a campaign rally in the swing state of Michigan in the final days of campaigning. AAP

It is entirely possible that Biden prevails easily, and the Republicans lose North Carolina, Michigan, Minnesota, Arizona and Pennsylvania. Trump goes out not with a bang, but with a whimper.

It is also possible the election proves far tighter than the pundits would have it. All eyes would likely be on Pennsylvania and its 20 electoral votes. If that’s the case, then looking for early indicators was a fool’s errand. It will be at least four days until we have an idea of the final tally in Pennsylvania, with its disputed postal ballot deadline.

Hang on to your seats. If Trump pulls off another astonishing, deeply implausible upset it might be time to recall the battle of Yorktown and a tale as old as the American republic.

On October 19 1781, Lord Charles Cornwallis, Knight Companion of The Most Noble Order of the Garter, surrendered to George Washington and the American Continental Army. Defeated yet defiant, Cornwallis ordered the Redcoat band to accompany proceedings with the tune “The World Turned Upside Down”. If Trump wins Florida, you’ll know to cue up the old jig.