It is the first time a police officer will face a murder trial in a First Nations death in custody case in the Northern Territory since the Royal Commission into Aboriginal Deaths in Custody in 1991.

The decision was handed down months after another policeman was charged with murder in the shooting death of an Indigenous woman in Western Australia. He has pleaded not guilty and is expected to face trial next year.

The cases are moving ahead amid a global reckoning on police and prison violence as part of the Black Lives Matter movement, which has focused new attention on First Nations families fighting for justice for the deaths of their loved ones.

Read more: Why the Black Lives Matter protests must continue: an urgent appeal by Marcia Langton

Late on the evening of November 9 2019, police officers entered Walker’s family home in Yuendumu, central Australia, to try to arrest him. This set in motion the events that led to Rolfe firing the three shots that killed the teenager.

Murder charges were laid against Rolfe days later, and bail was granted the same day. 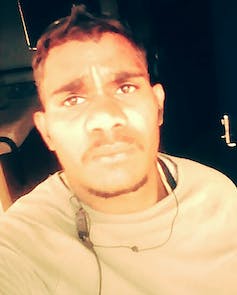 The NT Criminal Lawyers Association described the granting of bail over the phone for a serious homicide as “very unusual in the extreme”. It also raised concerns among Yuendumu elders that justice was being compromised in Walker’s death.

The freedom that Rolfe enjoys on bail contrasts with the high remand rates for First Nations people (85%) in the NT.

Rolfe has also been stood down from the police force while on bail, but is still receiving pay.

Before a trial for a serious crime can proceed to the NT Supreme Court, the local court must determine whether the prosecution’s evidence is “sufficient to put the defendant on trial”. This occurs through a committal hearing.

Rolfe’s three-day committal occurred in early September in Alice Springs. His lawyer made a “no-case submission” that the charges be dropped on the grounds of self-defence. 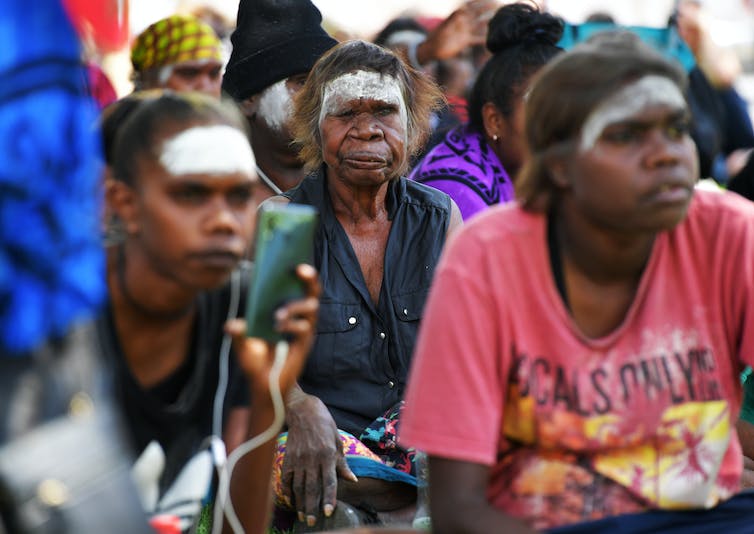 This week, the presiding local court judge, John Birch, determined there was sufficient evidence for Rolfe to stand trial.

Birch indicated the case will proceed in Alice Springs next year unless an application is accepted by the court to move the trial to Darwin.

There have been at least 434 First Nations deaths in custody since the Royal Commission into Aboriginal Deaths in Custody handed down its final report in 1991.

The commission followed years of community outrage and protests over mounting Aboriginal deaths in custody. It put forward 339 recommendations that called for the use of arrest and imprisonment as a last resort, safer police and prison practices, independent investigations into deaths in custody and Aboriginal self-determination.

Yet, First Nations deaths in custody have continued in violent, reckless and negligent circumstances, reflecting the failure of governments to implement and enforce the recommendations.

Gomeroi scholar Alison Whittaker has argued colonial violence in custody has been institutionalised through the lack of accountability in First Nations death in custody cases.

This lack of accountability is pronounced in the NT, where deaths in custody and police violence rarely proceed to charges or prosecutions.

The 2002 killing of 18-year-old Robert Jongmin by Senior Constable Robert Whittington resulted in murder, then manslaughter, charges being brought against the officer, which were eventually dropped.

The constable was then charged with the downgraded offence of “dangerous act causing death”, which was quashed by the NT Supreme Court on statutory grounds in 2006.

The royal commission also investigated the 1980 killing of an Aboriginal man, Jabanardi, who was shot during a fight with police following a traffic stop in the NT. The constable was put on trial for Jabanardi’s murder in Alice Springs in 1981 and was acquitted.

Trials against police in other states

Outside the NT, two well-publicised manslaughter trials in First Nations deaths in custody cases have resulted in not guilty verdicts.

The first was in the trial of four police officers and a police aide for the the death of 16-year-old Yindjibarndi man John Pat in Rosebourne police lock-up (Western Australia) in 1983. The second was Senior Constable Chris Hurley for the death of Mulrunji Doomadgee in Palm Island watch house (Queensland) in 2004. 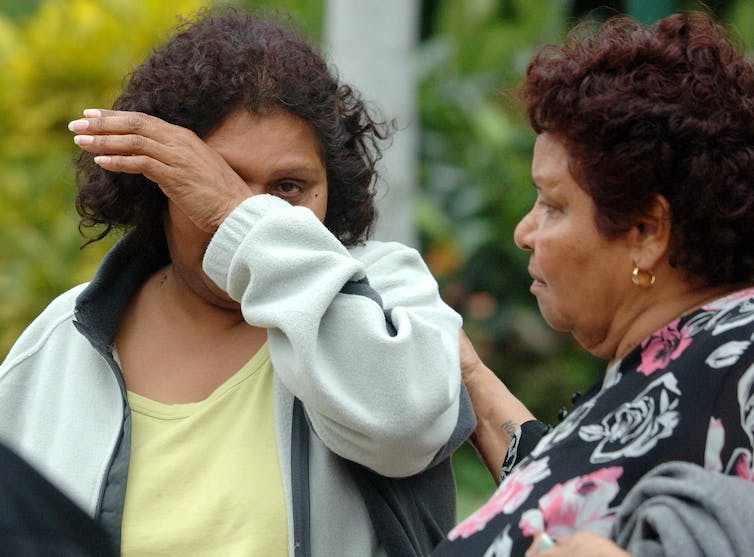 Tracey Twaddle (left), Doomadgee’s partner, reacting to the not guilty verdict passed down at the Townsville Supreme Court in 2007. DAVE HUNT/AAP

The empanelment of all-white juries to try the officers in both cases has been questioned by justice advocates. The Royal Commission asked in 1991 in relation to Pat’s death,

How does it come about in the Pilbara that a very important trial was conducted before a jury without Aboriginal representation, given the number of Aboriginal people in that region?

Another perceived factor behind the not guilty outcome in the Doomadgee case was the campaign run by the Queensland Police Union in support of Hurley. The defence of Hurley and his characterisation as a victim — demonstrated at police rallies and on wrist bands — received widespread media attention. 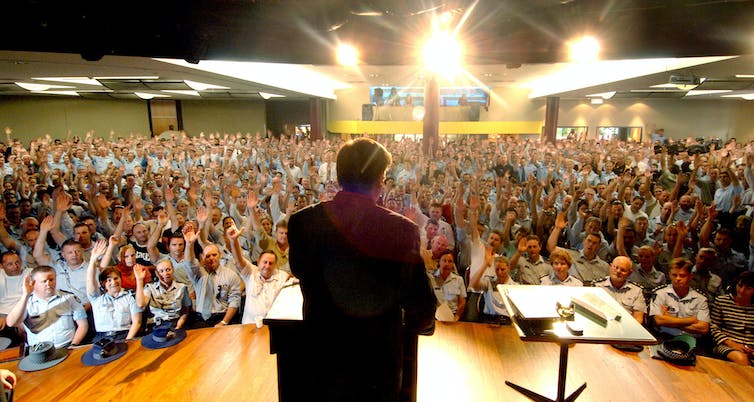 Queensland police vote to march on state parliament in response to a decision to charge Hurley in Doomadgee’s death. Dave Hunt/AAP

The Police Federation of Australia and NT Police Association have similarly defended the legitimacy of Rolfe’s actions in Walker’s death.

From the outset, Warlpiri people in Yuendumu have been strident in their demands for justice for Walker and protections from ongoing police violence. They have also called for police there to be disarmed.

Yuendumu Elder Harry Jakamarra Nelson deplored the recent $7 million spent on the local police station. He also implicated the lasting effects of the Northern Territory Intervention in the oppression of First Nations people by taking power out of the hands of locals.

This policy has contributed to the mass imprisonment of Indigenous people in the NT — described by many as a “gulag” — and the allegations of systemic racism in NT police practices.

Read more: Instead of demonising Black Lives Matter protesters, leaders must act on their calls for racial justice

Yuendumu community members, nonetheless, recognise they have made history as a result of the murder trial.

Ned Jampijinpa Hargraves, a senior Warlpiri man and chairperson of the Warlpiri Parumpurru [Justice] Committee, said the case provides the community with “relief”.

Meanwhile, other families continue their fight for justice. This week, the NSW coroner is hearing arguments about whether a corrective services officer who shot and killed Wiradjuri man Dwayne Johnstone as he tried to escape should be referred for prosecution. Like Walker, Johnstone was killed by an officer who fired three shots at him.

A coronial inquiry is also investigating the death of Anaiwan man Nathan Reynolds from an untreated asthma attack at a Sydney prison in 2018.

And the NSW Parliament has commenced hearings in an inquiry into the high rate of Aboriginal incarceration.

Walker’s cousin, Samara Fernandez, raised concerns earlier this year about the unequal application of the law and the lack of procedural fairness for First Nations people. She said,

You’d think it’s common sense to have a system that works equally for all populations … we want the system to be reinvented in a way that doesn’t have those stereotypes towards our people.

The dignity of procedural fairness and impartiality is the minimum First Nations families should expect when their loved one is taken by the law enforcement system.

Correction: The story has been updated to add details of a police officer who stood trial for murder in the shooting death of an Aboriginal man in the NT in 1980. It also removes reference to the number of officers at Walker’s house.